What’s all the fuss about fizzy drinks?

Snap-click, ahh, gulp. It’s a familiar sound at a barbecue, an ingredient in summertime nostalgia. Who doesn’t crave a fizzy drink on a hot summer day?

Indeed, sales of carbonated water have seen a sharp incline over the past half decade, increasing by 56.4 percent from 2009 to 2014, according to the market research firm, Euromonitor International. Sales of La Croix alone, the trendy carbonated water in a can, have tripled to $179 million since 2009, the Washington Post reports.

But why? What’s happening in our mouth when we guzzle fizzy drinks? Why are we drawn to carbonation?

“The main component of carbonation sensation is the pain,” said Paul Wise, a scientist at Monell Chemical Senses Center in Philadelphia. Scientists like Wise have studied the interplay of gas and bubbles on the human taste system.

The slightly painful quality of the drink — its bite — is thanks to a receptor found on our tongues. This receptor, called TRPA1, detects sour tastes, among other things.

Sour receptors protect us from hazardous chemicals like the hydrogen peroxide found in cleaning supplies — our tongues are designed to taste danger. They also give seltzer its bite. It’s the carbon dioxide in carbonated drinks that triggers these sour receptors.

Carbon dioxide – the bubbles in our beverage – enters the mouth and dissolves into oral tissue. A protein in the mouth, called carbonic anhydrase, converts carbon dioxide into acid. The TRPA1 receptor detects the acid and sends a message to the brain.

The degree to which this receptor is stimulated may determine whether the signal is interpreted as pleasure or pain. Such a theory could explain our varying response to the cinnamon flavor, which also excites TRPA1. We happily chew Big Red gum, but consuming large amounts of cinnamon — known in pop culture as the cinnamon challenge — is painful, and extremely dangerous.

In fact, the body mounts a defense response when many TRPA1 receptors are activated, Wise said.

“At higher levels [of stimulation], in addition to sensation, you’ll get physiological defense responses designed to dilute and clear – so that is increased saliva, coughing, sneezing, tearing and also respiratory reactions.”

Pain sensors that detect harmful gases are also found in your nose. But the skin of the tongue and the mucous in the nose are different as they relate to carbon dioxide, said Bruce Bryant, a scientist also at the Monell Chemical Senses Center.

In the case of the tongue, carbon dioxide has a thick layer of cells to get through before it reaches the receptor. But in the nose, that layer is thin. This is why a belch can burn in our noses — the nasal cavities are more sensitive to the carbon dioxide that gurgles back up.

Which brings us back to the bubbles. What role do the bubbles play in the bite? Researchers tested this by asking people to drink carbonated drinks in a hyperbaric chamber, where controlled atmospheric pressure removes the bubbles, but not the carbon dioxide, from the drink. Without the bubbles, they found, participants still taste the bite.

Not true for mountain climbers who take carbonic anhydrase inhibitors to avoid altitude sickness, which keeps the bubbles, but removes the bite. Such medicine prevents carbon dioxide from becoming an acid and stimulating TRPA1. The adventurers described their victory beverages as dishwater-y, according to a researcher interviewed in this NPR segment. (This taste could be due to more than just the lack of acid, Bryant adds. The medicine “plays havoc with your taste system.) 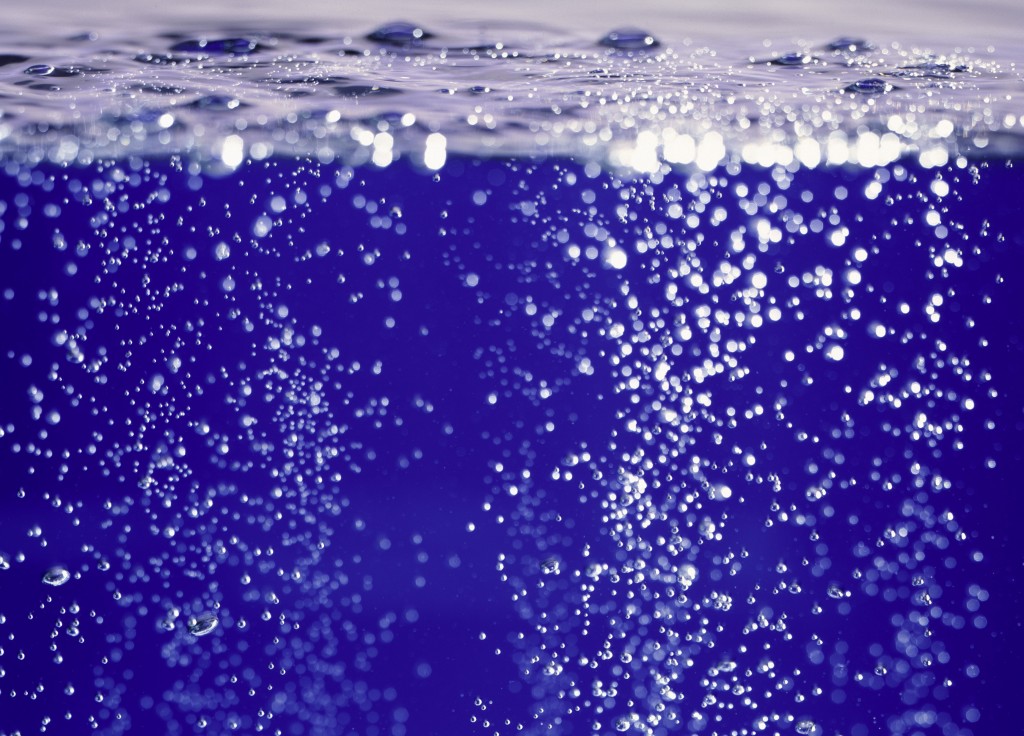 A close up look at sparkling water. Photo by Foodcollection RF/ Getty Images

Scientists have also found that bubbles increase the perception of sourness. Bryant and colleagues collected evidence showing that bubbles can enhance the pungency of carbonation. Even when paired with sugary drinks, bubbles can actually decrease a drinker’s perception of sweetness. A study published on July 10 in Neuropsychologia showed that foods with rougher textures are rated as more sour.

But Bryant thinks that seltzer’s success may be thanks to it’s “refreshing” taste, which he defines as “some combination of cooling and clean mouth feel.” Mucins are proteins in the mouth that reduce friction between oral surfaces, like your tongue and teeth. Astringent drinks, like lemonade or tannin-heavy wine, wash out mucins and give that clean-mouth feeling.

And just like all cold beverages, chilled seltzer stimulates nerves that detect cooler temperatures. “The cooling may interact to reduce or change the quality of the pungency that you get out of carbon dioxide,” Bryant said. From personal experience, we probably all agree that seltzer cans left in the sun are less refreshing on a hot day than the chilled version.

By the way, only a small amount of the fizz released from a bottled beverage makes it into the stomach. Despite concerns that have been raised, research shows that carbon dioxide doesn’t cause gastroesophageal reflux disease, gastrointestinal cancer or bone disease. And while sugars and other acids found in sodas can contribute to tooth decay, carbon dioxide alone doesn’t have a significant impact on oral health.

Seltzer scientists agree that our love for carbonation and other pain-inducing foods like chili peppers is learned.

“A lot of kids take a while to develop a taste; I saw it with my own kids,” Wise said.

Children develop strong flavor associations. Consider spicy desserts: Habanero jam, kiwi salsa, or ghost pepper brownies. Pair the spice of a hot chili with a pleasurable carbohydrate like sugar, and over time you develop a preference for the painful taste.

This may be true for seltzer and soda too. Today’s carbonated soda does pack a lot of sugar — just over ten sugar cubes. And many of us start with soda and graduate to seltzer water.

But would we love seltzer if we’d never loved soda?

As yesterday’s soda drinkers enter today’s low-sugar diet, they are increasingly turning to seltzer – a calorie-free drink with a sensation that reminds them of the sugar. Some food for thought: if our passion for bubbles comes from a previous love for sodas, then will new, health-conscious generations avoid soda and never learn to love seltzer?