The science of sleeping in, and why you probably shouldn’t

I hate sleeping in, but that’s mainly because I can’t. Almost every day, since I was a teen, regardless of whether it’s a weekday, weekend or holiday, I wake up at 6 a.m.

As an early bird, I admit to some delusions of morning grandeur — “Let’s wake up early Saturday and climb a mountain!” — but being a morning lark has proved annoying to others in my life, particularly those who function by “catching up” on sleep over the weekends.

Maybe you’ve experienced this too? Your boyfriend/girlfriend/life partner/spouse groans as you roll out of bed at the crack of dawn, eager to climb mountains. Brunch invitations are a logistical quagmire; do you starve yourself for hours or eat breakfast twice in one morning? 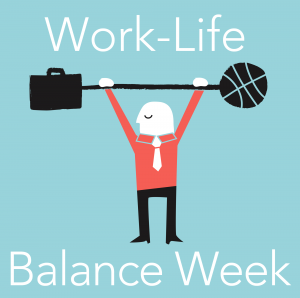 Night owls have the opposite problem. I’ve heard them hoot, “If only I could go to bed early and wake up early. I’d be so productive!”

Is this true though? Does waking early improve productivity? Is there a downside to shifting the sleep schedule from weekday to weekend? Would we be better off if we could switch our sleep schedule preference, known as our chronotype? PBS NewsHour tracked down two sleep experts to explain the science of sleep.

Did sleeping in evolve to give teens a sexual edge?

When we’re newborns, we need oodles of sleep, as much as 17 hours in chunks spread throughout the day. But as we age, less sleep is required, and we settle into a nighttime schedule that is controlled by two biological processes: our homeostatic sleep drive and our circadian rhythm.

Sleep drive alerts the body to when it needs sleep. Imagine carrying a bucket of water throughout the day. We wake up to an empty bucket that gradually fills as we perform our daily duties. The longer that we stay awake, the more that the bucket fills, until our bodies succumb and demand sleep.

“Sleep drive accumulates the longer you’re awake, and then dissipates with sleep,” said psychologist Brant Hasler of the University of Pittsburgh, who studies how sleep and circadian rhythms influence reward seeking. Sleep empties the bucket, leaving you fresh, unburdened and alert in the morning.

Your circadian rhythm, on other hand, is a roller coaster that regulates your alertness and grogginess during the day.

“This rhythm would be present even if we lived in a cave,” said Kelly Glazer Baron, a clinical health psychologist at Northwestern University, who says that our circadian clocks are governed by a part of the brain called the suprachiasmatic nucleus. This timekeeping pocket of 20,000 neurons cycles your blood pressure, body temperature and sleep hormones like melatonin throughout the day to control alertness and drowsiness. External factors like light exposure and physical activity determine when this rollercoaster peaks — for most people that’s right after waking and during the late afternoon — and when it hits sluggish low-points — 1 p.m. to 3 p.m. and at night. The evening lull in your circadian clock should ideally sync with a full sleep drive bucket, allowing you to fall asleep comfortably.

Children get sleepy soon after sunset, but most teens — especially boys — prefer to stay awake about three hours longer and sleep in later the next day. Then around the age of 20, our schedules creep back again toward being morning larks. This same pattern holds in other mammals. But why?

“The evolutionary perspective has been that sleep-phase delay allows adolescents to pursue autonomy, and animal researchers put it towards competition for mates,” Hasler said. “By staying up later, they’re not competing with parents for reproductive success, which gives an advantage.”

In other words, in the days of primeval humans, adolescents might have used this trait to compete with older alpha males and females who slept earlier, given that heightened sexual activity tends toward “eveningness” in animals as well as men and women today. 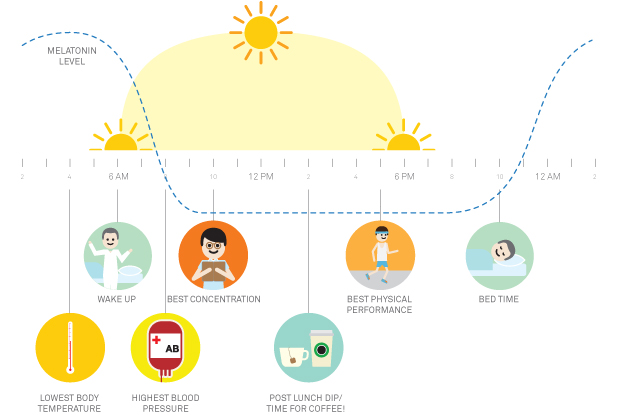 The circadian clock. Illustration by fuzzyscience

Research has shown that sleep loss due to early morning school schedules can increase a teen’s risk toward obesity, mood disorders like depression, drug use and automobile accidents.

The latter two behaviors might stem from how adolescents judge rewards and sensation seeking, according to Hasler. In a 2012 study, his team looked at the fMRI brain scans of teenagers while the teens made judgments about monetary rewards. The weekday-weekend shift in sleep reduced brain activity in the prefrontal cortex and striatum, which govern why we pursue rewards and our sense of fulfillment once we receive a reward, respectively.

According to the study, less prefrontal cortex activation might impair a teen’s ability to weigh the pros and cons of different rewards, leading to risk taking. Meanwhile, “there are some models of substance abuse showing that reduced reward sensitivity causes people to seek out greater, higher and more intense rewards to get the same bang for the buck, said Hasler.

“We get these kids in the clinic with delayed sleep phase disorder. They’re failing out of school or struggling terribly in school, because they can’t get up on time. We have to find ways to help them,” Hasler said.

Baron agrees, suggesting that in an ideal world both teens and adults would have school schedules or jobs that match their sleep preference or chronotype. About 10 percent of people lean toward being morning larks, while 30 percent are night owls, according to a 2007 study by chronobiologist Till Roenneberg. The majority of people fall somewhere in between. (You can discover your chronotype by taking this questionnaire, by keeping a sleep diary or by wearing a sleep tracking device, Baron said).

“I treat night owls with delayed sleep-wake phase disorder. We can give sleep behavior recommendations, light therapy or melatonin to shift their sleep times to earlier,” she said. “But they’re never going to like it as much or feel as good as they do at night.”

The adolescent habit of sleeping in is hard to break as we become adults, especially on the weekends. And lifestyle disrupts our preferred schedules. Night owls are forced to rise early for school or work. Social activities keep early risers up late. This disharmony between societal obligations and our sleep cycles is called social jetlag, a concept coined by Roenneberg. And social jetlag has some unpleasant side effects.

“People like to sleep in on the weekends because it makes them feel better,” Baron said. “The problem is you’re at a greater disadvantage for getting on track during the week.” Sleeping late upsets the balance between the sleep drive and the circadian clock. And shortchanging our slumber throws our sleep and circadian patterns out of whack, which at best, manifests as crankiness/grogginess and at worst, as illnesses like depression or infections.

Also, you’re kidding yourself if you think that you’ve adjusted to a misaligned, weekday-weekend sleep schedule. Studies shows that over time, people lose their self-awareness of their sleep impairment. Their reaction times slow and they judge themselves as less sleepy than they actually are.

“That’s one of my big fears about what’s going on in greater society. People think that they’ve trained themselves to get by on less and less sleep, but what they’ve really done is lose track of the effects. They lack awareness of how bad it’s really getting,” Hasler said.

There are health consequences for tweaking your sleep schedule, especially staying up later than normal.

”We’ve looked at sleep timing, meal timing and weight regulation. People who go to bed late eat more fast food and fewer fruits and veggies,” said Baron. This pattern is independent of sleep duration, so even when subjects get the requisite seven to eight hours of sleep at night, they still eat more calories. Others have reported that social jetlag might increase BMI, particularly in people who are already overweight, Baron said. Two recent studies from Finland and South Korea have linked being a night owl to diabetes.

Going to sleep early on Sunday won’t save you

So you’ve partied like a rockstar on Friday and Saturday night, and plan to recover by turning in early on Sunday. Sorry, this probably won’t work, Baron says. It creates something he calls “sleep onset insomnia.” Staying up late over the weekend combines with anticipatory workweek stress to keep you up late.

“You’re nervous about the week, and you try to get in bed earlier, but since you’ve shifted later over the weekend, you’re body’s not ready to sleep then. That’s probably almost everyone’s Sunday night,” Baron said.

Here’s a better gameplan, says Hasler: wake at a your normal time on weekends and take short naps.

“It’s better to not sleep in on the weekends and then take an afternoon nap to make up for lost sleep,” Hasler said. That’s because sleeping late changes when external signals, like light exposure, interact with the circadian clock — causing it to start later.

“Naps are definitely an effective countermeasure for sleep loss, but it can be hard to gauge the impact the following night,” said Baron. “For people with sleep problems, often I would say catch up for one hour, but less than two.”

For occasions like Daylight Savings, when schedules are forced to shift, Baron recommends gradually shifting before clocks spring forward.

“In the days before Daylight Savings, gradually move your bedtime and set your alarm clock 15 minutes earlier every day,” Baron said.

Left: Puberty delays the circadian clock, meaning teens are wired to stay up later. But this has its challenges. Photo by Robert Daly/Getty Images.