The European Space Agency celebrates the historic cosmic achievement of the first-ever comet landing Wednesday. Scientists hope the Philae probe, which is currently resting on Comet 67P/Churyumov-Gerasimenko, can provide clues into the origins of the universe. Video via AP

The European Space Agency celebrated a first-ever achievement Wednesday after landing a spacecraft on the surface of Comet 67P/Churyumov-Gerasimenko.

The successful touchdown of the Philae lander marked the end of 10-year, 4-billion-mile journey for the Rosetta spacecraft that culminated in a seven-hour countdown between Philae’s launch from the craft and its landing on the comet’s surface.

“We are the first to have done that,” ESA director-general Jean-Jacques Dordain said in an address livestreamed by the agency, “and that will stay forever.”

PBS has exclusive access for this story and the scientists and engineers that made this incredible journey possible. Be sure to watch “To Catch a Comet,” a one-hour documentary airing, Nov. 19 at 10 p.m. On PBS stations. Preview a rough cut of the show below:

After months of orbiting its target, the Rosetta spacecraft is finally ready to fulfill its mission: landing a probe on the surface of Comet 67P/Churyumov-Gerasimenko.

Scientists have yet to successfully land anything on a comet. If Rosetta can successfully deploy its Philae lander on Wednesday, it would be the first mission to achieve such a feat.

It would also be the pinnacle of a decades-long journey for the European Space Agency, the organization behind the Rosetta mission. The ESA spent ten years planning and building the spacecraft before launching it on an additional ten-year trip — sending it through outer space for its meetup with Comet 67P. It’s the most complex mission the agency has ever undertaken, and it’s about to enter its most complex phase. 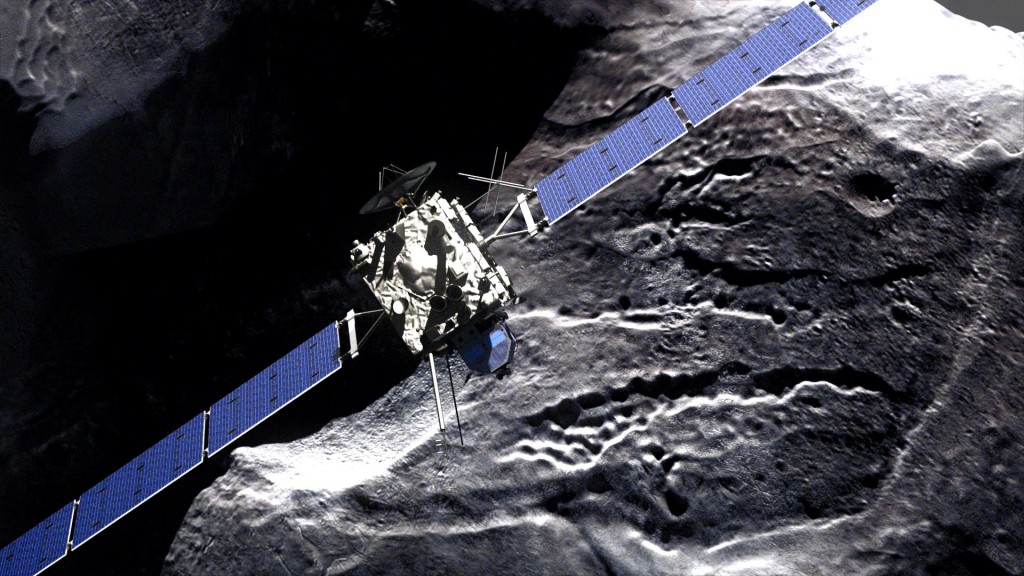 The Rosetta spacecraft will soon attempt to land a probe on the surface of a comet. If successful, it would be the first mission to achieve such a feat. Image by DLR German Aerospace Center

Landing Philae properly on the comet won’t be easy, as Stephan Ulamec, manager of the landing mission, points out.

“You plan for 20 years and then, in the end, you realize the probe you have worked on may touch down on a nice flat area and you are fine or it could move 10 meters to one side and hit a boulder and everything is lost,” Ulamec said. “Twenty years of my career — and those of my colleagues — will be boiled down to those few seconds. So, yes, it will certainly get emotional in the control room as we wait for a signal to say Philae has landed safely.”

“The landing is so difficult,” U.S. Rosetta project manager Art Chmielewski told the PBS NewsHour in August. “So, so difficult. It’s definitely one of the hardest things humankind has ever done.” The comet is currently soaring through space at 36,000 mph, meaning Rosetta has to maintain the exact same speed alongside it, then try to drop the probe into an area that is slightly more than half a square mile.

Chmielewski likened the landing to grabbing a mosquito by the wings — except the mosquito is in New York, and somebody is working the controls from Los Angeles.

Assuming the probe does land successfully, it would mean the start of significant data collection. Researchers hope to learn how a comet is put together, what its surface is like and how it changes as it hurtles towards the sun.

For a more in-depth look at the Rosetta mission, read our Science Wednesday piece from August. And for live updates on the comet landing, check out the mission’s website.