What scientists are thankful for this Thanksgiving

You know what goes great with cornbread and turkey? Science. This year, the NewsHour reached out to a handful of scientists to find out what they’re thankful for — and here’s what they said. We invite you to chew on these with your Thanksgiving dinner. (And if the discussion does veer toward the White House and get heated, we also offer you our guide to holiday civility.)

On the International Space Station, I’ve been involved in a plethora of scientific research across a wide range of fields and have even been the primary subject of science. I am thankful for the discoveries we continue to pursue in all of the sciences, but I am particularly awed by what we are learning about our climate.

After living some 230 miles above our planet for a total of 520 days over the span of my 17-year spaceflight career, I’ve witnessed significant changes back on Earth. I have seen the fragility of our atmosphere, watched the burning of the rainforests and photographed the massive amounts of pollution we dump into our atmosphere on a daily basis.

I am thankful for the scientists who are studying this evidence that our climate is undergoing change due to our actions, so we can solve the problem and protect our key life support system that is our planet for the benefit of all.

–Scott Kelly is a retired NASA astronaut who holds the American record for the longest consecutive period of time spent in space, 340 days.

The Census of Marine Life is one of the most notable in my mind: a 10-year study that united more than 2,000 scientists from 80-plus nations worldwide to document the diversity, abundance and distribution of life in the ocean – from its smallest inhabitants, the microbes, to the largest marine mammals.

I am grateful for this Herculean collaborative research effort that generated a critical inventory and baseline of life in the ocean today — a baseline by which future environmental changes can be compared and can serve as a guide for management and conservation of marine resources. The census illuminated just how little we know about the ocean, discovering thousands of new species, and uncovering many new habitats and interactions. While the Census of Marine Life formally ended in 2010, its importance and impact will extend long into the future.

–Victoria Orphan is a geobiologist and professor at California Institute of Technology. She is also a 2016 MacArthur Fellow. 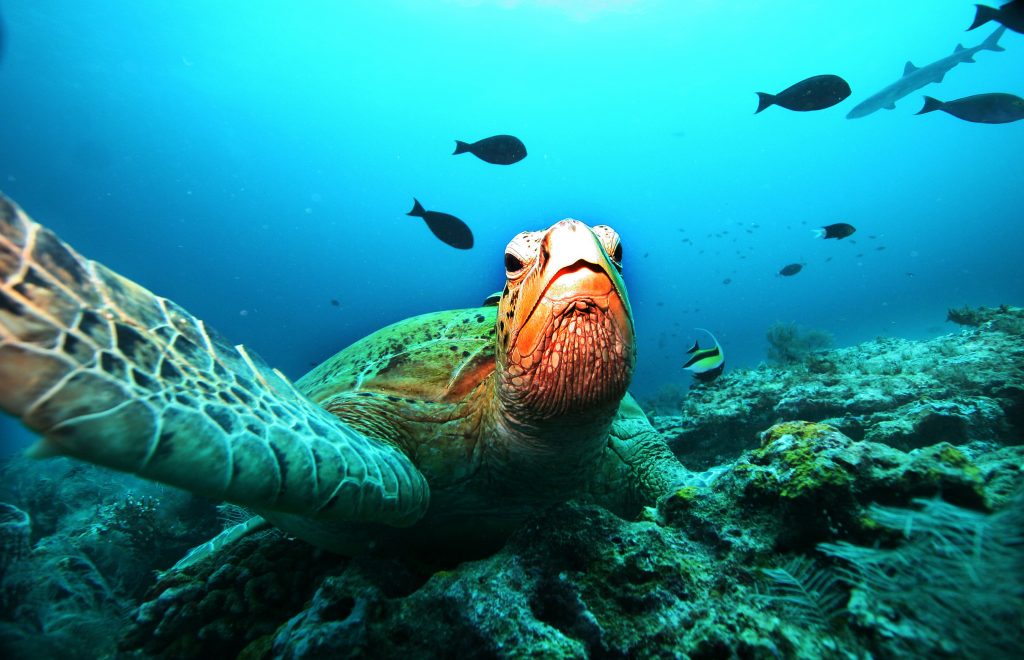 A giant green turtle rests on a coral reef at a diving site near the island of Sipadan in Celebes Sea east of Borneo. Ocean research is field that scientists are grateful for this Thanksgiving. Photo by REUTERS/Peter Andrews.

It may seem cliche, but I’m thankful for the diversity of thought that this country was founded on. It’s what got us to the moon, and it’s what will get us to Mars.

–Sunita Williams is a NASA astronaut who holds records for the most and longest spacewalks ever completed by a woman.

There is a website called Arxiv.org that allows scientists in many disciplines to post preprints of their work. I’m thankful for this site for two reasons: the obvious reason is the high-quality scientific discussion that it enables with people from all over the globe. Arxiv is indispensable to find the latest and greatest results in many scientific areas.

I’m also thankful for a more human reason: it warms my heart that scientists share their knowledge freely to better society. By giving away this knowledge freely (and as soon as possible), scientists may miss out on some of the personal benefit of their own science: new companies that could be started, new products that might be created, and it may even give their scientific competitors the means to scoop them. I guess I’m just thankful that there are so many like-minded people out there, who want more than anything to make the world a better place. I’m also just plain thankful I get to pursue such a fulfilling passion.

–Christopher Ré is a computer scientist and assistant professor at Stanford University. He is also a 2015 MacArthur Fellow.

This year, I’m grateful for the LIGO (Laser Interferometer Gravitational-Wave Observatory) detection of gravitational waves from merging black holes, a magnificent achievement that is easily worthy of the Nobel Prize in physics. This discovery provides exceptionally strong evidence for the existence of black holes — regions of space where gravity is so strong that nothing, not even light, can escape.

Even more importantly, it confirms a major prediction of Einstein’s general theory of relativity: the existence of gravitational waves, which are ripples in the fabric of space-time that travel at the speed of light. This observation opens a whole new window for exploring the universe.

Already, at least two interesting and somewhat unexpected systems were discovered — binary, orbiting black holes, each of which has a mass of 20 to 30 times the mass of the sun. Who knows what other fascinating objects will be found in the future?

–Alexei Filippenko is an astrophysicist and professor of astronomy at the University of California, Berkeley

We reflect and give thanks for the health of our team members and our families and the striking developmental biology of our babies, as I’m reminded of daily by my granddaughter next door. Moreover, thanks for the sharing attitude of our colleagues in general, and in particular, openhumans.org, and the CRISPR community, as exemplified by 133 labs (and growing) freely sharing through Addgene.org and Jennifer Doudna giving her entire Gairdner Award to Pged.org.

–George Church is a genetic engineer and professor at Harvard Medical School. 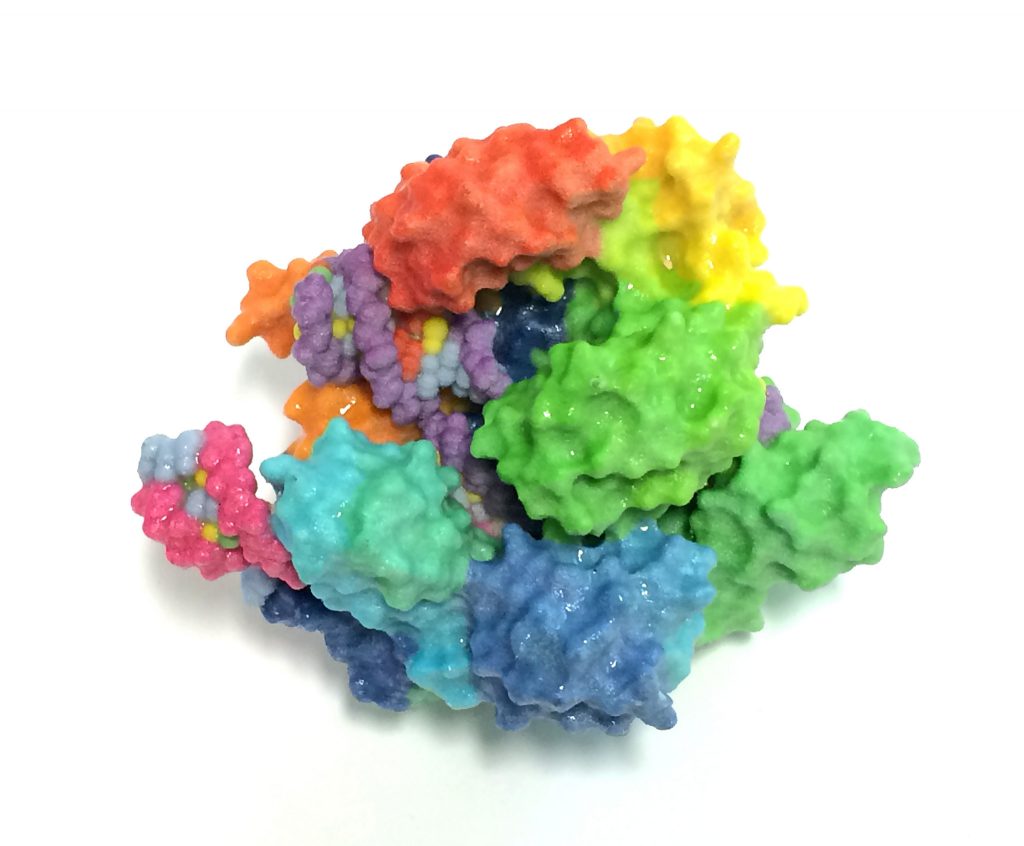 3D-printed model of CAS9, a DNA-cutting enzyme that features in the CRISPR gene editing system. Photo by NIH Image Gallery

If I had to pick a domain-specific advance I’m thankful for, it’s ancient DNA research. The ability to sequence DNA from ancient archaeological samples of teeth and bones has revolutionized my field of population genetics. We can now see the genetic footprints of past population movements with much finer detail and there has been great progress in settling decades-old debates about the human past.

At three different moments this year, I was fortunate to attend scientific conferences where the presentations simply blew me away. It’s absolutely inspiring to see how scientists so regularly use clear thinking, clever uses of new technologies, and dogged persistence to gain new insights into how our universe operates. So rather than any specific advance, I’m simply thankful for the hard work and brilliance I see in other scientists, and for this powerful, complicated tool we use to understand nature.

–John Novembre is a computational biologist at the University of Chicago. He is also a 2015 MacArthur Fellow.

Basic science and the scientific method

I am grateful for the outstanding public education I received, which has continued to sustain me throughout my career. I grew up in California back when we were ranked near the top of the U.S. in per capita expenditure on public education, and I attended UCLA for college when the state paid close to 80 percent of the university budget.

I had the benefit of great and inspiring teachers who nurtured my passion for basic science and showed by example the power of the scientific method to reveal the fundamental truths of the natural world. We must continue to invest in public education as the one consistent engine of social mobility that offers those who are willing an opportunity to make a better life for themselves and for the nation and world.

–Randy Schekman is a cellular biologist and professor at the University of California, Berkeley. He is also the winner of the 2013 Nobel Prize in Physiology or Medicine.

This Thanksgiving, I am grateful for the chance to teach and mentor young scientists who will develop into our next thought leaders. Academic research is performed by undergraduates, graduate students, and postdoctoral researchers, who make incredible discoveries while mastering their chosen fields. It is through their passion, hard work, and tenacity that we advance our collective knowledge and harness it to improve the human experience.

–William Dichtel is a chemistry professor at Northwestern University. He is also a 2015 MacArthur Fellow.

Left: The International Space Station is home to a wide range of scientific research endeavors, many of which scientists are thankful for this Thanksgiving. Photo by NASA.