Starfish are dying by the millions up and down the West Coast, leading scientists to warn of the possibility of localized extinction of some species. As the disease spreads, researchers may be zeroing in on a link between warming waters and the rising starfish body count.

ORCAS ISLAND, Wash. — Drew Harvell peers into the nooks and crannies along the rocky shoreline of Eastsound on Orcas Island. Purple and orange starfish clutch the rocks, as if hanging on for dear life.

In fact, they are.

“It’s a lot worse than it was last week,” said Harvell, a marine epidemiologist at Cornell University. She’s been leading nationwide efforts to understand what is causing starfish to die by the millions up and down North America’s Pacific shores and on the east coast as well. It’s been called sea star wasting syndrome because of how quickly the stars become sick and deteriorate. 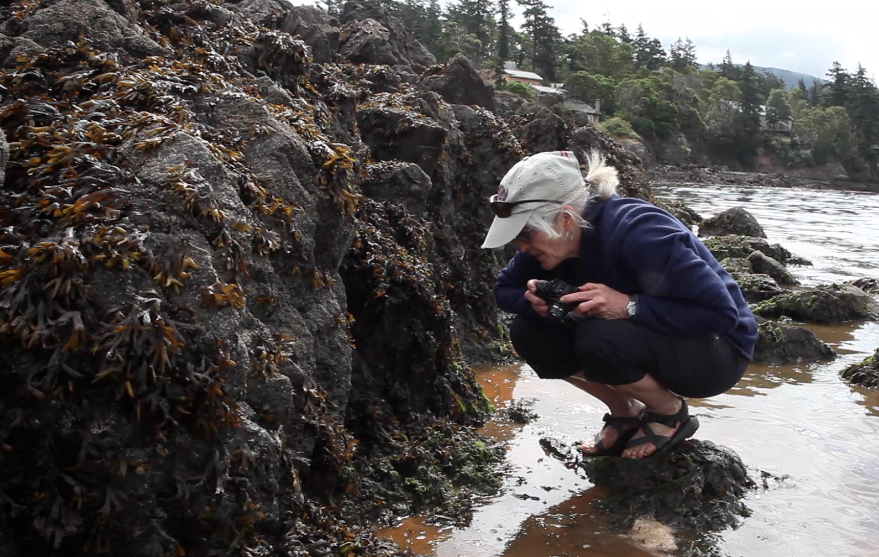 “It’s the largest mortality event for marine diseases we’ve seen,” Harvell said. “It affects over 20 species on our coast and it’s been causing catastrophic mortality.”

Scientists have been working for months to find out what’s causing the massive die-off and now Harvell and others have evidence that an infectious disease caused by a bacteria or virus may be at the root of the problem. The disease, they say, could be compounded by warming waters, which put the sea stars under stress, making them more vulnerable to the pathogen.

Harvell has studied marine diseases for 20 years. She had thought that the syndrome might spare Washington’s San Juan Islands. Until recently, pockets of cold water and swift currents seem to have protected the local sea star population from the epidemic.

But with the arrival of summer, the waters around the San Juan archipelago have warmed. From what Harvell and her team see as they survey beaches, there’s not much time for these starfish — or sea stars, as scientists prefer to call them since they’re not fish. Harvell crouches in the sand and points at a withering orange pisaster ochraceus, or ochre star, one of the most common sea stars found in the intertidal zones of the West Coast. One arm is curled over on itself, another hangs by a thread of gnarled flesh.

“The whole arm is flat. It looks dried out, wasted, thin, deflated. Sea stars are not supposed to look like that,” Harvell said. “My expectation is that within the next month all of the stars will die.”

The team checked this rocky patch last week and found 10 percent of the stars showed signs of the wasting syndrome. Today they estimate that number has increased to more than 40 percent. They’ve been monitoring sites around the San Juan Islands through this past winter and expect the percentage of infected stars to continue rising as the waters warm this season.

“Over this winter I surveyed here, and looked at every animal and there was no disease at all,” said Morgan Eisenlord, a Ph.D. student in Harvell’s lab at Cornell. “When we came back in the spring we found sick animals so it obviously spread as it started to get warmer.”

Some scientists see a connection between rising water temperatures and the wasting syndrome. The waters around the San Juan Islands tend to be colder than the Washington outer coastline where dying starfish were first reported last summer. Since the arrival of warmer weather this season, the syndrome has spread rapidly to areas like the San Juan Islands that were previously untouched by the syndrome. Recent reports have also surfaced of die-offs along Oregon’s coastline. 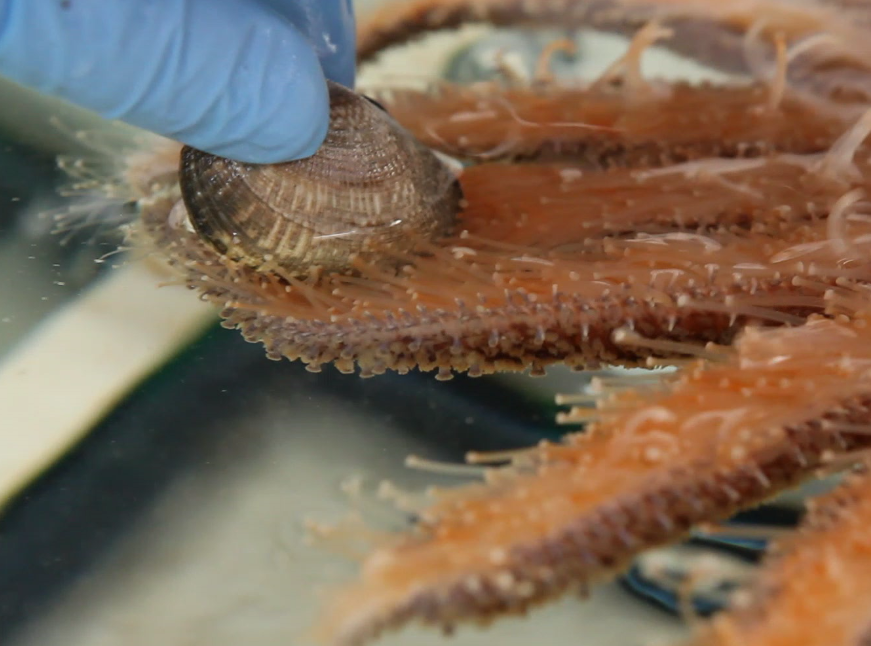 Shellfish are a main food source for starfish. Scientists are now testing the hypothesis that shellfish may have transferred an infectious pathogen that’s causing mass starfish die-offs. Photo by Laura James

Farther south in California where water temperatures are even warmer, starfish have been nearly wiped out, according to Carol Blanchette, a research biologist at University of California Santa Barbara. Blanchette has tracked the spread in Southern California closely, monitoring 30 sites. She said the hypothesis that rising water temperatures could be triggering the epidemic makes sense, based on what she’s seen.

“The period of time in which the disease progressed rapidly has been a period in which waters have been warmer than usual winter conditions,” Blanchette said.

While scientists are reluctant to assign blame to climate change, Harvell explained that as oceans warm, outbreaks like this are more likely to occur.

“A warmer world would be a sicker world,” Harvell said. “Under warming conditions a lot of microorganisms do better. They grow faster. They replicate faster. Many of our hosts can actually be stressed by warm conditions. And so it kind of creates a perfect storm of sickness.”

Looking Back, Looking Ahead

Sea star die-offs have occurred in the past, but never to this extent. In Southern California, Blanchette said die-offs occurred during warmer El Niño years — 1982-1983 and 1997-1998 most recently — but the sea star population eventually recovered. This most recent outbreak was first spotted in June 2013 on the Washington coast at a place called Starfish Point.

Scientists believe the pathogen spread through the water, as well as via physical contact (starfish often clump together). Another hypothesis is that the pathogen could also be concentrating in the mussels and clams that starfish like to eat.

At the University of California Santa Barbara Aquarium, captive sea stars started showing signs of the syndrome at the same time as their wild counterparts who live on the rocks several hundred feet from the tanks. The captive sea stars are kept in tanks of filtered seawater. In one tank they were fed mussels harvested from the rocks outside. In another tank the sea stars were fed frozen squid.

The animals that ate frozen squid stayed healthy, while the sea stars that ate the wild-harvested mussels contracted the syndrome. Blanchette cautions that these observations are purely anecdotal and the sample size is very small, but she believes this hypothesis merits further study.

That’s where scientists at Cornell come in. They are narrowing the list of pathogen suspects using DNA sequencing from samples of sick stars and hope to publish their findings in a scientific journal. Once the exact pathogen is identified and more is known about how the disease is spread, scientists will be better able to understand whether west coast starfish will be able to recover.

With projections for a warm El Niño year ahead, Harvell worries that things will only get worse for sea stars on the west coast.

Watch the original report from KCTS9/EarthFix that aired on the PBS NewsHour in January.

Seeking Boots On The Beach

In the meantime, there is a role for citizen science in tracking the epidemic. UC Santa Barbara, the University of Washington and Cornell University have set up websites where beach goers can share information about the location and abundance of infected sea stars. Then scientists can study how water temperatures, currents and other factors may correlate with the spread of the die-off.

“One of the reasons we’re a little obsessed with trying to learn everything we can about both the causative agent in terms of the microbe and the environmental conditions is to think about what we can do better next time,” Harvell said.

What Happens When They’re Gone?

Sea stars are an apex predator in the intertidal zone. They voraciously consume mussels and other shellfish, and they are referred to as a “keystone species,” meaning that, like in any stone building, if you remove the keystone, things start to crumble.

“It has an extraordinarily significant effect on the biodiversity of the entire community,” Blanchette said. 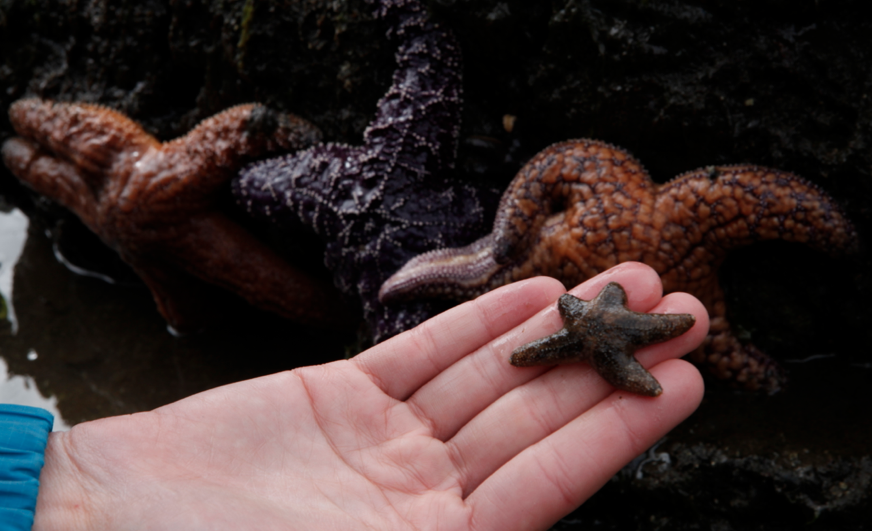 Scientists are wondering how young starfish be impacted by the widespread wasting disease that has killed starfish by the millions from Alaska to Mexico. Photo by Katie Campbell/Earthfix

“Losing a predator like that is bound to have some pretty serious ecological consequences and we really don’t know exactly how the system is going to look but we’re quite certain that it’s going to have an impact.”

Looking out at the rising tide on Eastsound, Harvell said, “This area has some of the highest biodiversity of sea stars in the world. We’re not just losing one keystone species, we’re losing a whole guild of stars.”

And the stars here are what’s called an endemic species, meaning they only live on this shoreline and nowhere else on the planet, she explained. If sea stars are wiped out along these shores, they could be gone forever.

She picks up a tiny young ochre star and looks carefully at its malformed arms for symptoms of the disease. If these juvenile stars can find a way to resist the pathogen, local extinction could be avoided, she said.