If you had to eat a human, which body part should you pick first?

If you had to eat human flesh, where would you start? That seems a disturbing question for westernized thought, sure, but cannibalism occupies a consistent position in the evolution of human behavior.

With 650 muscles and 206 bones in an adult, there are more than enough options on the menu. Some may carry tons of dietary value, while others are poor pickings. A new study published Thursday in Scientific Reports dissects the nutritional and caloric value of human body parts.

What a droll field of study, you say? Sure, unless you’re an archaeologist or anthropologist studying Neanderthals, native groups in Papua New Guinea or any number of hominid communities that have participated in cannibalism over the last 800,000 years or so.

“There are fewer complex behaviors in modern human society than cannibalism,” said James Cole, an archaeologist at the University of Brighton in England who led the study. “Cannibalism has all sorts of connotations and motivations within our own species.”

Hollywood enjoys playing on examples like warfare cannibalism or psychotic cannibalism like Hannibal Lecter. But when researchers like Cole dig through fossil and cultural records, cannibalism tends to fall into two categories: nutritional or ritualistic.

…if you want to go true Paleo by adding a little human to your diet, you should start with a person’s fat pads…

With nutritional cases, they find clear evidence where hominin bodies were clearly filleted with cut marks at tendon joints and then scraped for every last piece of meat. Hey, a fella has gotta eat. But then in other situations, the cut marks are random as if the human carcasses were not processed for food.

Clarifying this distinction is especially important for understanding the cultural diversity of early human relatives like Neanderthals, Cole said, who have been branded as “thugs” in part due to their unrefined behaviors like nutritional cannibalism.

These days, due to ethical and legal reasons, you cannot exactly take apart a human body and measures its nutritional content…but you could half a century ago. Cole tracked down data collected by a single research group during the 1940s and 1950s, where the scientists had analyzed the chemical composition of four deceased human males. (The subjects, who ranged in age from 35 to 60 years old, had donated their bodies to science.) He relied on data from a single team, rather than taking bits of information from studies on individual body parts, to avoid introducing extra variables into this calculations.

Within this data, Cole found values for water content, protein content and fat content for a variety of organs and body parts. From there, the math is easy. “One gram of protein is worth four calories, and one gram of fat is worth nine calories,” Cole said.

Due to the nature of the original data, Cole grouped the butt muscles with the head and torso, which had a caloric value of 5,400. Don’t bother with the kidneys, pancreas or teeth, which ranked among the lowest body parts calorie-wise.

Next, Cole compared the caloric values of humans with those of prehistoric animals found in the same archaeological layers as the remains of early hominins. Think bison, mammoths, woolly rhinos and deer. Based on his calculations, it seemed unlikely that all of our early relatives conducted cannibalism purely for nutritional reasons. 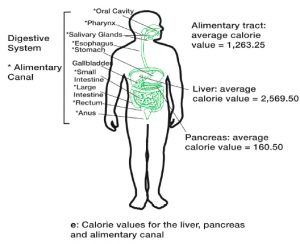 The calorific values of the digestive system and alimentary canal. Illustration via James Cole/Scientific Reports

“[Those animals] produce an awful lot. A horse is almost 200,000 calories. A bison is almost a million calories,” Cole said. “That would suggest me that they probably aren’t starving and that the cannibalism was a kind of last resort.”

Human motivations for cannibalism likely evolved over time, he continued. The earliest hominins may have cannibalized human meat for the meat’s sake — the if-grandpa-dies-that’s-a-free-meal scenario.

But over time, sophistication started likely to emerge both in Homo sapiens and our close relatives. Growing evidence, such as jewelry making and funeral rituals, argues for the presence of social complexity in Neanderthals, so ritualistic cannibalism may not be such an outlandish idea for Palaeolithic groups.

And for those thumbing their nose at the general idea of cannibalism, remember that some human cultures today still do it and most mammals eat their own, in one way or another. Plus cannibalism may have evolutionarily benefited humans. A 2003 study argued that prehistoric cannibalism drove genetic resistance to prion diseases in Papua New Guinea.

“It just so happens that Western culture has frowned on this practice for quite some time and driven the idea of it being taboo,” Cole said, though he has found it “quite difficult” to eat bacon since he began this study eight months ago.