Theoretical physicist David Kaplan discusses his new documentary “Particle Fever,” which followed scientists around the world for seven years as they hunted for the Higgs boson. Video by Justin Scuiletti

On July 4, 2012, physicists at the Large Hadron Collider in Switzerland announced that they had discovered the Higgs boson, the elusive particle that scientists hoped would explain why all matter has mass. News cameras rolled as the physicists popped open champagne.

What the public didn’t see were the years of stress, joys and frustrations that accompanied the efforts of the Large Hadron Collider. But theoretical physicist David Kaplan and physicist-turned director Mark Levinson followed the drama that unfolded since the collider went live in 2008, capturing 500 hours of film in seven years. Using professional film crews and physicists armed with cameras, “Particle Fever” captures the sheer excitement the moments before the collider first turned on and the distress in the control room when a helium leak brought research to a temporary stop. Theoretical physicists feared they would never see proof that this particle, the lynchpin of the standard model of particle physics, existed.

We caught up with Kaplan this week at a screening of the film at the National Science Foundation.

Why was the discovery of the Higgs particle so important? Why was this something that physicists pursued for decades?

Kaplan: The Higgs is just part of a long story that we’ve understood after many, many years – that basically matter and what makes up matter, like atoms, isn’t all there is, and that there’s something perhaps more fundamental, which is the vacuum of space itself. And what we’re always now attempting to do in colliders in particle physics is not break things apart and look inside. We’re trying to disturb the vacuum of space.

If you can imagine, say, a microscope. You’re looking through the microscope and the way you see something is the light bounces off the thing and bounces into your eye and gets magnified by the lenses. And to see something really tiny requires light with a wavelength that is tiny enough that it can resolve whatever you’re looking at. And subatomic particles are too small to resolve by regular visible light. And so what we send around those circles (at the Large Hadron Collider) are not just particles. They’re waves. And they’re waves with a wavelength so tiny, much tinier than the nucleus of an atom. We can resolve things, the tiny little bits of nature. But we’re not investigating the atom, we’re investigating spacetime itself. And the way you bounce light or waves off of space is you crash them into each other.

And what comes out tells us about the makeup of the structure of the vacuum of space. And the Higgs was some crucial component of the vacuum, which was important in explaining the mass of certain types of particles, which allowed certain types of matter to exist, namely us. And so we had so much inference or indirect evidence that something was there, but we had no direct evidence. We couldn’t see it directly. And so we needed to see that directly just so we could say, ‘Yes, that’s what it is, and here are the properties and now we can move on to the next thing.'” 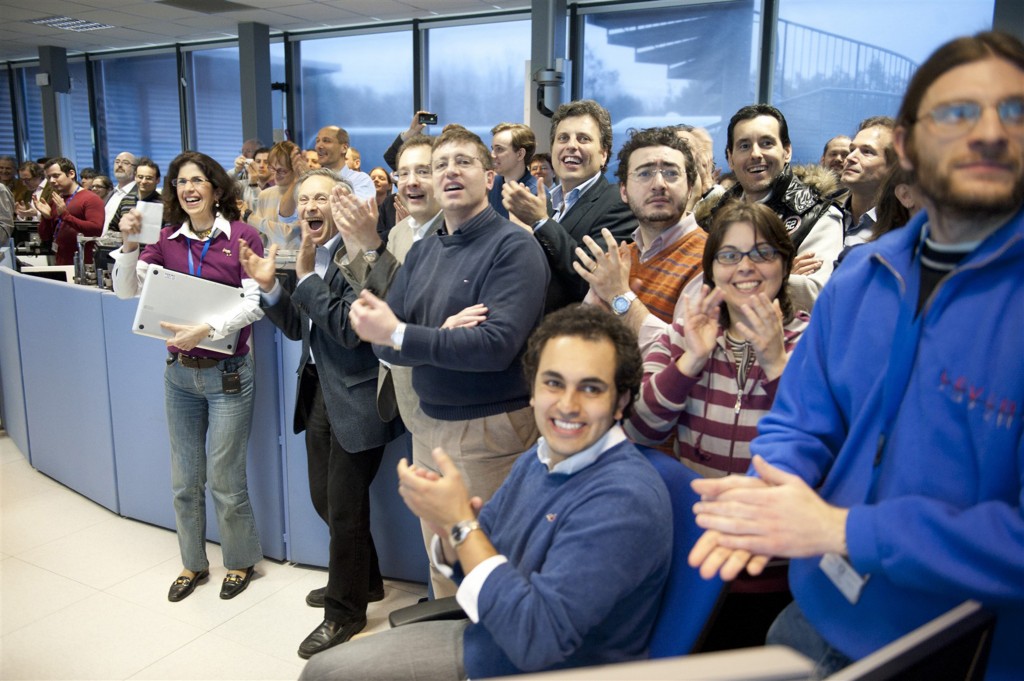 Fabiola Gianotti and other CERN physicists celebrate the first results of the Large Hadron Collider in March 2010. Photo courtesy of CERN

This movie was seven years in the making. How challenging was it to make this subject accessible to a general audience?

Kaplan: The making it accessible was certainly the hardest part technically in terms of making the film, so we left it to the very end. Not just because we didn’t want to deal with it, we’ll put the science in at the end, but we wanted the film to be driven by the narrative itself, and we wanted people to connect with who was in it, and relate them, and bring in physics only when it was necessary for you to understand what just happened. And in that way I think you probably remember it more, because it’s in a context…it’s almost making something you have to memorize into a song. Now you feel it. Now it makes sense. It has a rhythm to it. And the narrative had a rhythm to it, and then we would put in the physics when it made sense. That said, it was still extremely hard.

You really followed every step of this process. Tell me how you were there for so much — years of this discovery. Did you ever think, what if this doesn’t work? What if we don’t find the Higgs?

Kaplan: I personally was not after the Higgs. The story I was after was whatever the LHC would see, it would transform our understanding of things. It would have an impact on the specific theories that the theorists had all worked on. And that means, because it’s taken so long to get there, entire lifetimes of work would now be judged by this single set of data. And so whatever that was was fine with me. Knowing that the LHC was going to break through a certain threshold and tell us some information, it was momentous, it was an emotionally impactful event. That was all that mattered to me. So the real struggle was, will we raise enough money to keep filming and keep filming until we can actually get to a point of discovery?

The rest of the filmmakers, specifically my director Mark Levinson, who’s really my partner in this, he was looking for endings all over the place…I always felt we needed to see something that changed what we know, that affected people like me. You have to ignore how irrational it is to think that you make a documentary film about science when you have no idea what the ending is going to be, and you just plunge ahead and believe that at some point you’re going to get a compelling story out of it. And that’s how I was thinking: it was just how to survive until that point.

How did you get all of your footage?

Kaplan: It’s a very rough number but I think we have between 450 and 500 hours of footage. And we actually almost always had one paid camera crew. The little cameras we had decided to send off to the physicists in case we weren’t there at the time, and we trained them to use them. Mark had a one page set of instructions for our physicists who don’t know how to use cameras. And even then, some of them were uncomfortable recording themselves.

But it was useful that I was doing research the whole time, and I saw when things were about to happen, or when there was something to worry about…So we have all these misfires, things we recorded which are not that interesting.

This whole project has been compared to the Manhattan Project or the moon launch. Is that an apt comparison?

Kaplan: I don’t think particle physicists think of these monumental moments in terms of “this is the moment when we went from that to that.” They’re transformational, but 20 years ago, there were people who knew the Higgs existed and didn’t care less…There are even still people now who don’t believe we’ve seen the Higgs and it’s all a crock. Some of them are maybe a little crazy, but there’s a shift, a slow shift, and I think this was a momentous moment because it really took the entire world to do this. You’re no longer in a place where one country does it or one facility does it. You need that kind of support to do that. So it’s momentous because we all did it. And we’re all watching. Somehow the Higgs became something that non-physicists know about. I don’t know how that happened, but that’s a beautiful thing.

But we’re all relieved that we pushed through this energy. We know something about the Higgs. We know it’s there. We know its mass. That sort of removes 99.9% of the things we’ve been thinking about. And now we can expand the knowledge of that one set of consistent theories and see what’s next. 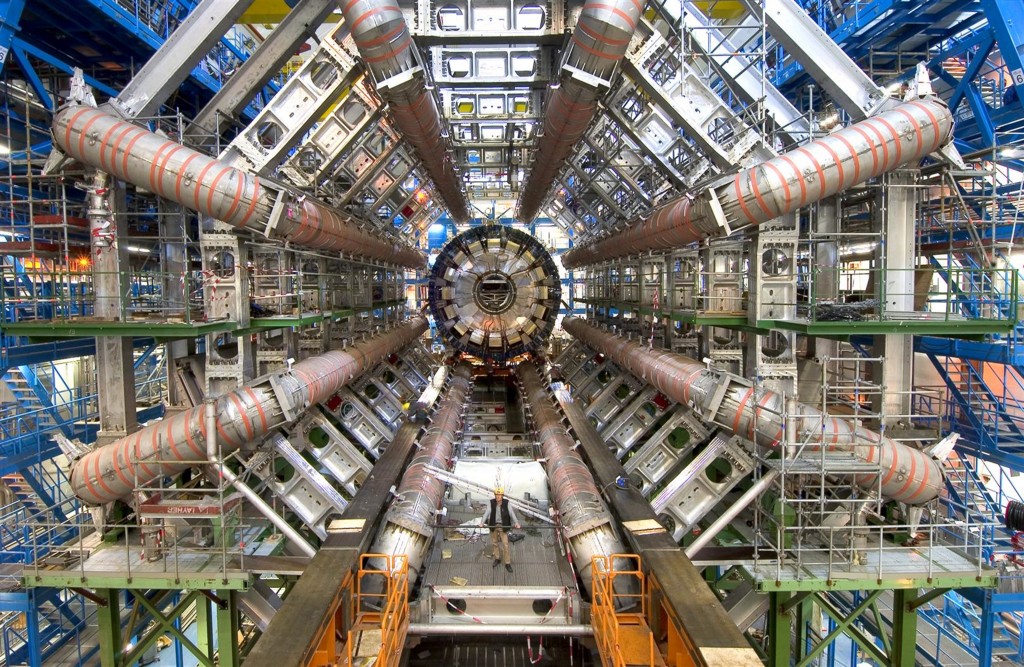 Installing the ATLAS calorimeter at the Large Hadron Collider in Switzerland. Photo Courtesy of CERN

So the Higgs has been found. What happens now?

Kaplan: The unfortunate thing about the movie is that…it became impossible to include the multiplicities of ideas in the research, and so we just focused on the monolith. And we had other little experiments that we had followed and recorded and interesting things happened, and then we eventually had to cut it out of the film.

I think there’s an emotional component to the Higgs. It took almost 50 years. Peter Higgs is still alive. Englert is still alive. And we all knew it was there and everybody who’s active in the field has not seen a discovery at high energies that is surprising or not absolutely predicted to be true for their entire careers.

So I think it was super dramatic because of that — because of the human component of it. But in terms of physics, it’s just one step along the way. Something much more dramatic would be if we discover what dark matter is. Dark matter could be another particle like the Higgs, but that particle makes up most of the matter of the universe. It is responsible for the creation of galaxies for example. It’s part of the infrastructure of the universe, and it’s not made of what we’re made of. And that’s very compelling and also tells us we have to break out of this model, this perfect circle we’ve had for 50 years.

The LHC really represents truly basic research, where you don’t know what your potential application will be. So can you explain when we talk about the LHC, and looking at this film, what is the value of this research?

Kaplan: That is always a struggle. A lot of us get that question. The real question is, what does humanity value? What is important? Yes, there are things that are good for curing disease. And that research gets a lot more money than particle physics. Snd there are things that are important for the environment. And that gets a lot more money than particle physics. And there are things that build weapons, and that gets enormously more money than particle physics. So what is particle physics for? What is this little thing, which is what are we and how did the universe start and what is the meaning of it all, that gets a little bit of that money. And we as humanity have to decide if that’s useful. I think it is. I think it is a critical part of a full explanation of the physical world. And yes, we have spinoffs, and yes, we’re responsible for the World Wide Web, which brought greater economic gain than any other discovery, blah blah blah, but that’s a stupid argument. The reason we do it is humanity is looking for answers to questions that you can’t find out any other way. And why not do it? And either humanity does it or they don’t. And it’s such a tiny fraction of what we spend that it doesn’t make sense to compare it to anything else.