In the shadow of a nuclear plant, the U.S. government lays out an unusual mission: teach the locals to trust science

SHELL BLUFF, Ga. — Life here in the farming communities along the Savannah River demands an uneasy trust with all things nuclear.

And in recent decades, that trust has been fraying.

One woman has stopped drinking her tap water because it smells like sewage. Another has lost too many relatives to cancer. A third wonders why hummingbirds no longer flock to her yard. All suspect the blame lies with the two giant institutions that dominate this rolling green landscape — a federal nuclear reservation and a massive nuclear power plant that sends steam billowing from two cooling towers as tall as skyscrapers.

“You always think of Erin Brockovich,” said community organizer Natalie Herrington. “Maybe there is a connection …”

Testing required by independent and federal regulators has repeatedly found no sustained heightened risks of contamination. But officials at the Department of Energy’s Savannah River Site recognized that all the suspicion itself was toxic. For some locals, it’s become a force that’s made life feel as unstable as a radioactive atom.

So the federal government has launched an unusual effort to put residents at ease — by teaching them to trust science.

In the final year of the Obama administration, the University of Georgia received a grant of nearly $665,000 to send a team of ecologists and educators to this poor, rural stretch of northeast Georgia, where life revolves around farms and faith. Launched this summer, the program is designed to demystify the science that officials use to monitor the air and water for radioactive contamination — and explain to residents of Burke County why there’s no need for alarm.

“It’s easy to blame … the biggest perceived threat,” said Gene Rhodes, director of UGA’s Savannah River Ecology Laboratory, which is leading the program. “To me, it’s disturbing to think someone may see steam coming out of the Plant Vogtle stack and worry they’re being exposed to radionuclides. We have enough to worry about in this life — that’s an unnecessary threat. But we’re not getting the message across.”

A wildlife biologist from South Carolina, Rhodes is acutely aware that the Trump administration has proposed deep cuts to environmental protection efforts and has sought to cast doubt on, rather than build trust in, mainstream science. Still, he holds out hope that this program can become a national model. Before he can think bigger, however, Rhodes has to figure out how to explain dense environmental science in a community where only 1 in 10 adults has a college degree.

“No one here has done this kind of outreach,” he said. “It’s not easy. But I believe it’s worthwhile — and I’m willing to step out on a limb to earn their trust.”

On a recent Monday morning, residents trickle out of the oppressive heat into the cool Burke County Library. Megan Winzeler, a 26-year-old wildlife biologist with curly blonde hair and thick amber glasses, asks everyone to be seated. Half a dozen people are here today for the second of three public meetings.

Still, Winzeler, who works for the UGA team, is encouraged by the turnout, given the community’s historic distrust of environmental monitors. She intends to hold scores of meetings over the next two years — including sessions tailored to churchgoers, Rotary club members, and seventh-grade students.

She pulls a chair into the middle of the library’s conference room to explain the program’s goals and offer a history of environmental monitoring here. For decades, federal funding paid for monitoring of the air, groundwater, crops, and animals all around the 310-square mile Savannah River Site, which straddles the border of South Carolina and Georgia. The nuclear reservation makes a vital component for nuclear weapons: tritium, a radioactive form of hydrogen that at very high levels may increase cancer risk.

Over time, federal officials came to believe the testing in Georgia was redundant, since any heightened levels of contamination would likely surface first in South Carolina before making their way through the soil and water to Burke County.

In 2003, the U.S. cut off funding, declaring no more need for outside monitoring in Georgia. The utility that runs the power plant, Atlanta-based Southern Company, still submits its own annual reports to the Nuclear Regulatory Commission; last year, it wrote that testing found “no adverse radiological environmental impacts” associated with the reactors.

Jacob Hawkins, a spokesman for the utility, said the plant has also published newsletters and offered tours to make sure locals are comfortable with the nuclear power in their midst. The company supports the federal effort, too: “We appreciate the importance of communication with our neighbors,” Hawkins wrote in an email.

READ NEXT: Citizen science often overstates ‘cancer clusters’ like the one linked to artificial turf

Winzeler conceded the very mention of tritium worries residents — especially since scientists at the time didn’t do a good job explaining that the “elevated” levels didn’t automatically mean there was cause for concern.

“Right now, community members feel like conclusions are being drawn by the government,” she said. “And the government is saying, ‘Everything’s fine, just trust us.’” 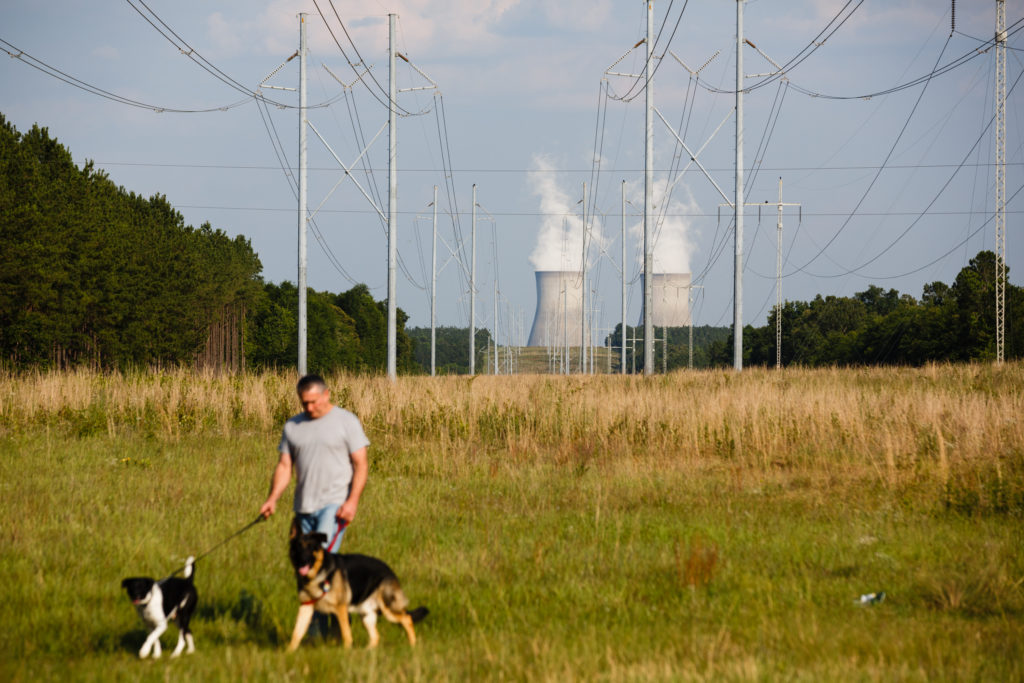 A man walks his dogs in a field cleared for power lines leading to the Vogtle Electric Generating Plant. Photo by Dustin Chambers/STAT

It’s her job now to put the elevated tritium levels in perspective, in part by helping locals understand that people all over the world, not just in Burke County, are exposed to low levels of radiation on a daily basis. She also wants to help them understand just what the monitors were collecting.

The raw data are available on a public website. “But it’s hard to find. It’s hard to understand. It’s a lot of numbers.” Winzeler said.

And that’s no help to anyone here, said Herrington, the community activist: “The data should be easily interpreted so you don’t have to be a rocket scientist to understand.”

So Winzeler starts at square one: the scientific method.

She pulls out her oversized Post-it note board to write words like “observation” and “conclusion” as she discusses the art of making scientific predictions, collecting data, and checking for bias. She explains that she will show residents how to collect new samples from the air and water over the next two years, but mostly for the purpose of demonstrating how such monitoring works, not to do rigorous testing.

“It’s good to educate residents,” Bonitatibus said. But she also wants a robust monitoring program to compare pollution levels now to those from over a decade ago.

“We need,” she said, “to answer the damn question of whether we have a problem or not.”

Lillie Wilson grew up here in Shell Bluff, a tiny riverside community full of cotton farms and unadorned churches near the lush banks of the Savannah River.

She left for work at a VA hospital in Augusta, but returned home about a decade ago to find the nuclear power plant up and running. (It started producing energy in the late 1980s.).

READ NEXT: Uncertainty haunts parents of Flint, as every rash, every tantrum raises alarms

Just as such questions were being raised, Wilson’s grandma died from lung cancer despite never smoking. The death drove her to find answers. Her first thought: the nuclear waste stored at the federal reservation.

“A lot of places don’t want this stuff,” Wilson said. “Why are we the dump site?”

So did the others. At the final meeting of the day, Winzeler opens the floor for questions, and longtime resident Rose Johnson brings up the old testing that found elevated levels of tritium. Then she asks: Is it related to my water tasting and smelling like sewage?

He grasps for an analogy to make clear why that, in and of itself, should not be scary. Just imagine, he says, that the ceiling of this room is the level of tritium the federal government deems dangerous to human health. The levels found in Burke County were elevated — but only to the height of a sheet of paper lying on the ground. In other words, nowhere close to being a real health risk.

The explanation doesn’t seem to change anyone’s opinions on the spot. But the wary residents listen — and some say they’re eager to come back to learn more.

Outside the library after the meeting, Johnson sits on the bench listening to the hum of cicadas. She’s lived here for over 50 years and can’t imagine ever leaving the house where she picks okra and squash from her garden. But home has brought hardship. Her mother and sister first lost bouts with lung cancer years ago. Recently she’s also had to bury two of her brothers. They, too, had lung cancer.

She’s at a loss. Is it hereditary? Is it something in the water?

The uncertainty has made her worry about her health. Ideally, she’d like to see monitoring restored. In lieu of that, she hopes this program will deliver answers.

“At least somebody is doing something,” she said.

Rhodes must walk a tightrope in Burke County. Trust can’t be built without acknowledging the community’s concerns about nuclear pollution. But there’s risk that local activists will seize the opportunity to press for more vigorous federal monitoring, which is not likely to come, especially given the deep cuts Trump has planned for the Environmental Protection Agency.

There’s also the faction that doesn’t want monitoring at all. Allen DeLaigle, chairman of the Burke County Commission, said he’s satisfied with the tests run by the operators of the power plant.

“In the society we live in, you just can’t be afraid of everything,” he said. “[Activists] lay everything on Plant Vogtle when they should spend time taking care of themselves.”

It’s also true that the power plant and the federal nuclear reservation are among the biggest employers in Burke County, which has a population of just 22,000.

Between full-time and construction jobs, more than 6,000 people currently work at the Vogtle site. The nuclear reservation lists its workforce at 12,000. Both are an oasis of well-paying jobs near a county where the average median household income is $33,600 and the poverty rate is nearly double the national average.

Most people in the area don’t want to rock the boat by targeting those employers.

“Nobody wants to talk about it,” said the Rev. Willie Tomlin, a pastor at the Thomas Grove Baptist Church in county seat of Waynesboro.

Rhodes now hopes teaching the fundamentals of research will get community members talking again. He’ll be happy if he can restore their confidence in science — and in the government that has repeatedly reassured them that their air and water are safe.

“We have small expectations,” he said. “We’re going to build from there.”

This article is reproduced with permission from STAT. It was first published on August 11, 2017. Find the original story here.