The hills of Mercury are alive with earthquakes, according to a study published Monday in Nature Geoscience. The diminutive planet joins Earth as the only other known tectonically active planet in the Solar System.

“We have to take another look at how rocky planets are evolving,” said Thomas Watters, Smithsonian planetary scientist and study co-author.

The discovery was made thanks to NASA’s MESSENGER probe, which orbited the closest planet to the sun from 2011 to 2015. MESSENGER spotted fault scarps, which are cliff-like features that indicate a history of contractions in the planet’s crust. These scarps are huge, with the largest up to 1,000 kilometers — 621 miles — long.

The smoking gun came when Messenger spotted the presence of small scarps, measuring less than 10 kilometers (6.2 miles). “Small landforms are not going to survive for terribly long” due to the asteroid bombardment on Mercury, Watters said, meaning the tectonic activity responsible for them must have occurred recently.

Large fault scarps had been discovered previously by Mariner 10, a NASA probe sent to Mercury in the 1970s, but small scarps had never been observed in the past.

Another cool finding: The tiniest planet in our celestial neighborhood is shrinking. Watters and his colleagues found the planet is becoming smaller due to a cooling core. 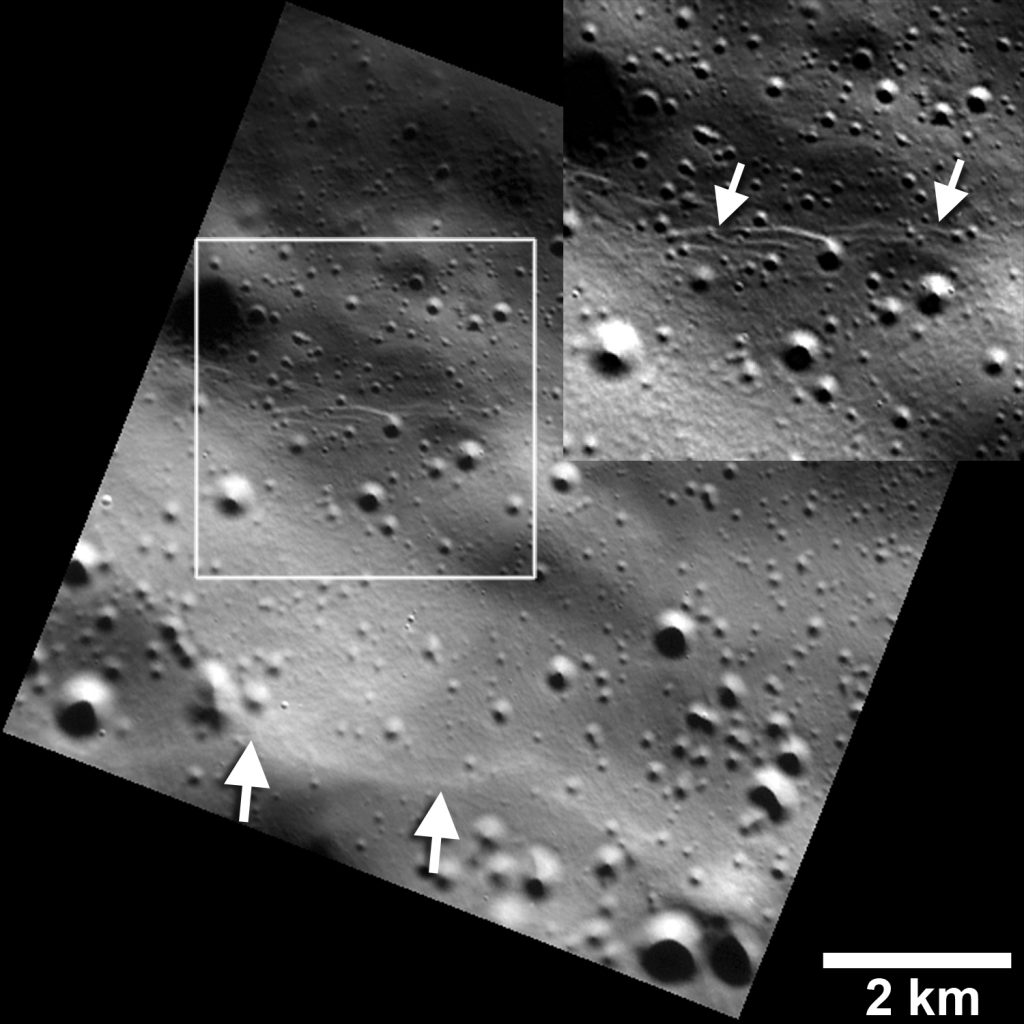 Small graben, or narrow linear troughs, have been found associated with small fault scarps (lower white arrows) on Mercury, and on Earth’s moon. The small troughs, only tens of meters wide (inset box and upper white arrows), likely resulted from the bending of the crust as it was uplifted, and must be very young to survive continuous meteoroid bombardment. Photo and caption by NASA/JHUAPL/Carnegie Institution of Washington/Smithsonian Institution

Early signs suggest Mercury harbors a single tectonic plate across the entire planet, unlike Earth which sports a mosaic of plates. And this uniform shell appears to be contracting.

“As the interior of the planet cools, it contracts and shrinks,” said Watters. But even though the core is cooling, he added, Mercury’s core remains warm enough to drive movement of these plates. This feature contrasts with Mars, which is tectonically dead.

To confirm “Mercuryquakes,” scientists will need readings from seismic stations on the surface, Watters said.

Left: False color image of the eastern limb of Mercury as seen by MESSENGER as the spacecraft departed the planet following the mission's first Mercury flyby in January 2008. The colors convey information about the distribution of different rock types on Mercury's surface. The Caloris basin, visible as a large bright yellow circular area in this image due to its infill of volcanic plains, dominates the northern region. Photo and caption by NASA/Johns Hopkins University Applied Physics Laboratory/Carnegie Institution of Washington