What made the recent Ebola outbreak in west Africa so virulent? The virus that seeped across borders and killed more than 11,000 people in the region had at least one genetic mutation that better equipped it to breach human cells, new research suggests. The startling discovery provides the first evidence that genetic changes likely sped up transmission—and may have made the terrifying disease even more deadly for humans.

Earlier studies of the 2013–16 Ebola outbreak have emphasized how its location—at the contiguous corners of several countries with porous borders—as well as human behavioral factors helped the virus explode across west Africa and eclipse any Ebola outbreaks that preceded it.

But findings from a pair of studies published Thursday in Cell complicate that story by suggesting genetics played a part, too. The studies hinge on genome evidence and lab experiments designed to test how Ebola virus, with genetic changes that developed during the west African epidemic, assaulted the cells of humans and animals.

The two research teams first examined more than a thousand viral genomes that were isolated and sequenced from Ebola patients across Liberia, Sierra Leone and Guinea. One group also explored additional sequences from Mali. The two teams worked separately and were not aware of each other’s efforts until the papers were well underway, authors from both said.

In one study led by 16 researchers at the University of Massachusetts, Broad Institute and elsewhere, genomic analyses pinpointed parts of the Ebola virus that changed during the west African outbreak. One genetic mutation, in particular, appeared to affect a key region of the pathogen where it binds to human cells. Lab tests confirmed the mutated virus could better infiltrate the cells of humans and other primates.

The change was so small that earlier computational analyses of genome differences had not picked it up, says Jeremy Luban, a virologist at the University of Massachusetts Medical School who co-authored the study.

Yet this relatively subtle modification may have had an outsized effect. Gaining easier entry into human cells may have enabled the virus to replicate more quickly in a host—and those greater numbers could make it more likely to jump to the next person, Luban says.

Along with faster transmission rates, the mutation was also associated with higher death tolls.

People infected with mutated Ebola virus that dominated the recent epidemic appeared to be twice as likely to die as those infected earlier in the same outbreak with a strain of virus that did not have that specific mutation, the researchers found. The UMass team came to that conclusion after analyzing the viral genomes and health outcomes of two groups of Ebola patients in Guinea: those infected with the virus as it existed early in the outbreak versus the later, mutated version. 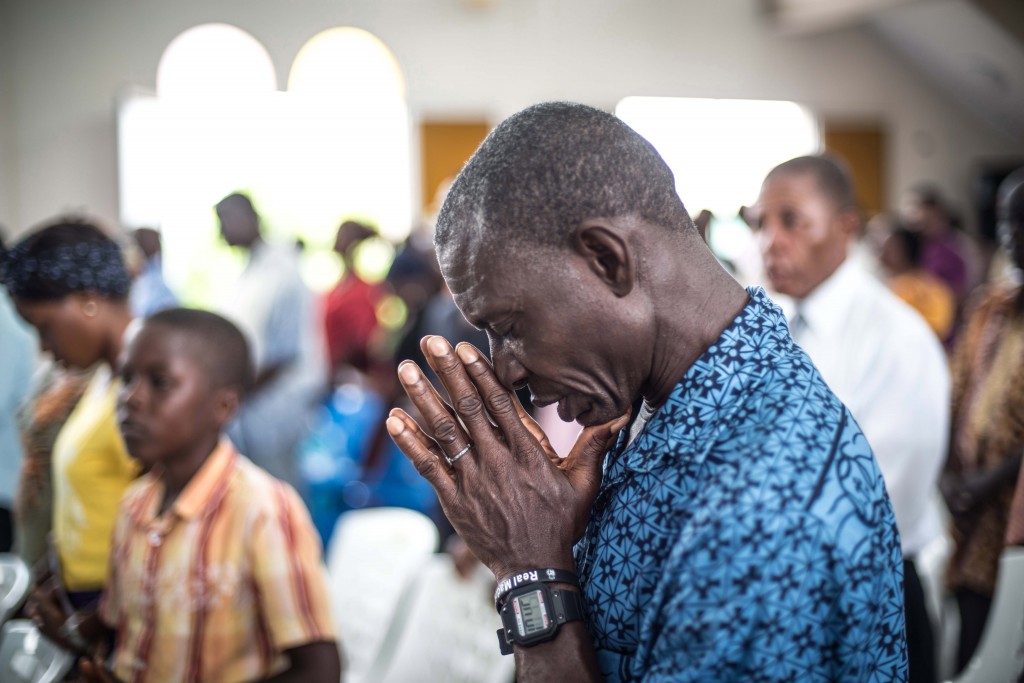 A man prays for those who died of Ebola at St. Joseph Parish Catholic Church in Monrovia, Liberia on Oct. 12, 2014. Photo by Mohammed Elshamy/Anadolu Agency/Getty Images

Even after the researchers accounted for other factors—such as differences in how much virus a patient had in his or her body—it was clear that those with the mutated type were more likely to die.

“Because the virus transmits better from person to person doesn’t necessarily mean it’s more deadly. It may just increase the number of infected but have the same deadliness—and thereby end up killing more people because it spreads more efficiently,” Luban says. “Our data, however, suggests that it was more deadly as well.”

Although earlier genomic analysis of Ebola had suggested the pathogen was not changing substantially during the west African epidemic, one lesson from these new studies is that researchers should not overestimate what they know about the effects of a mutation based purely on computational comparisons, says Jens Kuhn, lead virologist at the Integrated Research Facility at Fort Detrick in Maryland, who was not involved in the work.

“One mutation can change something drastically,” he says, referring to the results of the experimental work. Exactly why the virus with these mutations would be more likely to kill still remains a mystery. One possibility is that a mutated virus leads to higher viremia—more viruses in a patient’s body—but in this work that relationship was not statistically significant on its own. Luban’s group hopes to launch further studies to answer those questions.

In the other study Jonathan Ball, a molecular virologist at the University of Nottingham, and his colleagues independently came to a conclusion similar to the other team’s. Genomic analysis and cell experiments revealed that a gene that encodes instructions for an Ebola surface protein, which helps the virus attach to host cells, had evolved to allow the pathogen easier entry to human cells.

Judith White, a virologist at the University of Virginia School of Medicine who was not involved with the work, praised the two complementary studies’ findings as “quite credible” and said it was “surprising that so small of a change could cause that much damage.”

The Nottingham group’s lab experiments further found the mutation that helped the virus flourish among humans probably made it less effective at moving among individuals in its likely animal reservoir, fruit bats. The adaptation underscores that once the virus spilled over into humans it did not need to jump back to other species to keep the epidemic going—it was able to jump from human to human. (Similarly, the genetic change made the virus less able to gain entry to the cells of other nonprimate mammals such as rodents, cats and dogs, the UMass study found.)

Factors like the location of the latest outbreak played the largest role helping Ebola spiral out of control but genetic factors likely contributed as well, Ball says. The virus infected more than 28,000 people during the most recent epidemic, giving the pathogen an unprecedented opportunity to mutate and become more successful in a human host, he notes. (There have been more cases and deaths in this outbreak than all other Ebola events combined.) Yet exactly what this genetic mutation allows Ebola to do—say, latch onto a host cell with greater ease or better evade human cell defense systems—remains unknown.

“What we think is that the changes in the way its surface protein interacts with the surface of the host cell make it more efficient so that [infection] can happen quicker,” Ball says.

Ebola may have developed other important mutations that have not yet been uncovered, Ball notes. What they now know, he says, is that Ebola has mutated in a way that “can impact the virus’s ability to infect human cells—and we saw those changes being passed from generation to generation of viruses,” he adds. “To us, that’s a bit of a smoking gun.”

This article is reproduced with permission from Scientific American. It was first published on Nov. 3, 2016. Find the original story here.

Left: A startling discovery provides the first evidence that genetic changes likely sped up Ebola transmission during West Africa's outbreak—and may have made the terrifying disease even more deadly for humans. Photo by John Moore/via Getty Images

Dina Fine Maron is an award-winning journalist and the associate editor for health and medicine at Scientific American. She is also a contributor to the publication's podcasts and Instant Egghead video series. She is based in Washington, D.C.