Skin poaching of Asian elephants, a crisis unfolding in Myanmar, could crush the species

Over the last three to four years, poachers have begun taking the elephant’s skin and turning it into ruby red jewelry. The skin is also ground into powder and sold as medicine, according to separate investigations conducted by the Smithsonian Conservation Biology Institute and Elephant Family, a conservation watchdog in the UK.

With about 50,000 left in the wild overall, Asian elephants are 10 times more endangered than African savanna elephants and half as common as African forest elephants. Unlike their well-known African cousins on the open savanna, Asian elephants prefer the seclusion of the thick jungle. Yet this insulation appears unable to protect from a new wave in poaching that is poised to wipe out the 2,000 remaining Asian elephants living in the wilds of Myanmar.

In the past, ivory poaching has had a limited impact on Asian elephants because only adult males grow tusks, and even then it only happens 25 percent of the time. Skin poaching is much more problematic than killing elephants for their ivory because it’s indiscriminate — it targets adult males, adult females and calves. 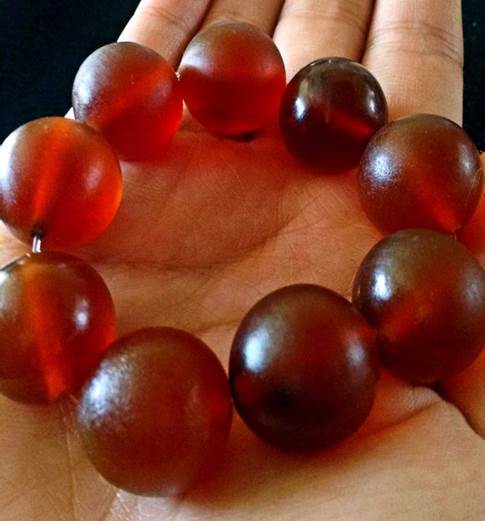 Elephant skin is transformed into red blood beads and sold as jewelry. Photo by Elephant Family

“It’s the surest way to drive the species into extinction,” said Peter Leimgruber, director of Smithsonian’s Conservation Ecology Center, whose team of ecologists stumbled on this uptick in poaching, while conducting a routine tracking study in Myanmar.

At its current pace, this skin poaching trend could wipe out Myanmar’s wild elephants in less than 60 years.

How this poaching crisis was revealed

Asia’s rapid population growth and habitat loss, caused by development and mass agriculture for crops like rice and palm oil, has spawned a pattern of human-elephant conflict — both inside and outside of Myanmar. Asian elephants are known to consume crops and, when threatened, destroy human homes. In May, a 12-year-old Rohingya refugee was killed when an Asian elephant attacked a temporary housing settlement in Bangladesh.

Their tracking system worked like the “Find my iPhone” app, except packaged into a 23-pound collar.

“We wanted to learn about the basic ecology of elephants and what brings them into conflict with people,” John McEvoy, a movement ecologist with the Conservation Ecology Center and one of the researchers in the field, told PBS NewsHour. “We really just discovered this poaching by accident.”

Leimgruber said their tracking system worked like the “Find my iPhone” app, except packaged into a 23-pound collar. Every four hours, the collar beamed text messages to a satellite with an elephant’s location, which was then relayed via email to the researcher’s smartphones or computers. Elephants at the Smithsonian National Zoo in Washington D.C. wore the collars for a year to ensure the devices didn’t cause discomfort.

“We found that for some of them, all of a sudden, their collars would stop working or stop sending signals,” Leimgruber said. “Five of them we knew were poached. We found them poached. Then there were two that disappeared, and the way their movement changed right before they disappeared indicated that they were probably poached too.” 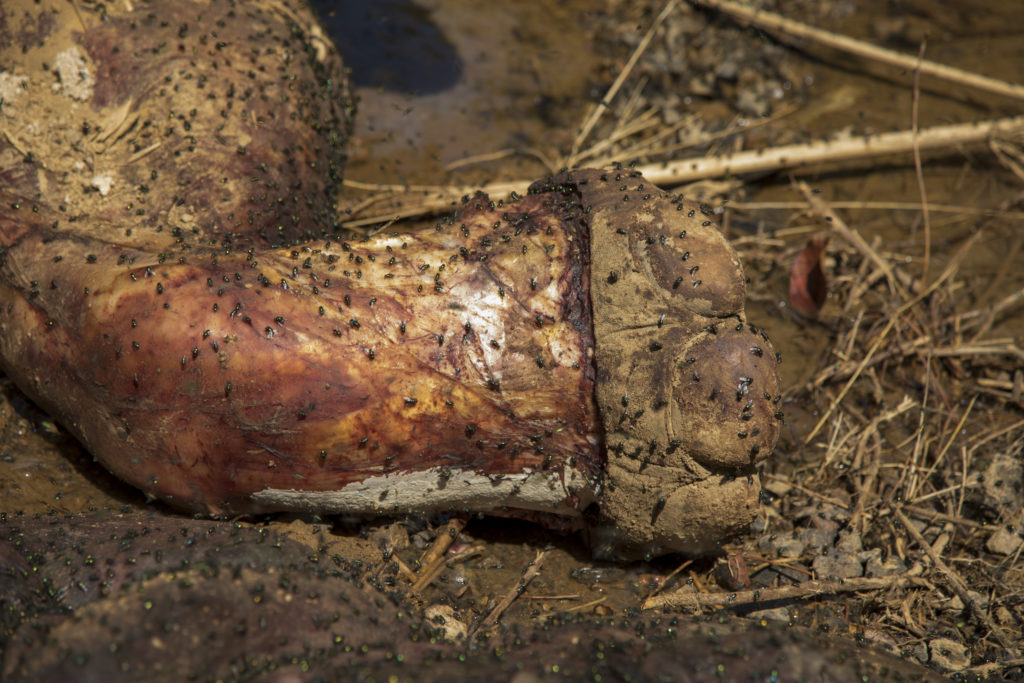 Leg of an Asian elephant, poisoned by poachers and skinned to the toes. Photo by Klaus Reisinger, Compass Films

This unexpected pillage led the Smithsonian researchers to partner with Human-elephant Peace, a Myanmar-based outreach program geared toward raising public awareness about human-elephant conflict. Together, they spread out and collected reports of poaching from villages.

In the end, they found about 45 poached elephants between March 2015 to August 2017. A separate survey by the Myanmar government reported 25 poached elephants in 2016. Combined with the Smithsonian numbers, this poaching tally over the last three years is more than double what the country witnessed from 2010 to 2014. Myanmar strictly controls the possession of firearms, so poachers rely on herbicides packed into poison darts to kill Asian elephants, according to communications between government officials and the Smithsonian.

A separate survey by the Myanmar government reported 25 poached elephants in 2016. The combined tally of 70 poached elephants over the last two years is more than double what the country witnessed from 2010 to 2014. Image by Adam Sarraf

Who is buying elephant skin jewelry?

Elephant Family, a British conservation group that specializes in Asian elephants, first heard whispers about this skin poaching in late 2012.

At the time, their group was working with government officials and building a report about the illegal trade of living animals from Myanmar to Thailand. 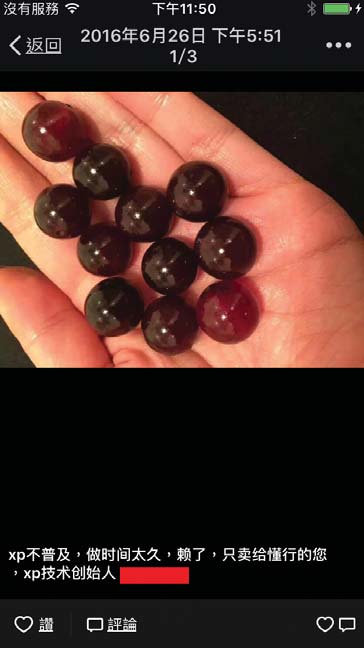 Around 15,000 Asian elephants are kept in captivity across the continent, but under international law, it’s illegal to trade Asian elephant in any form — except for rare cases such as swapping blood samples for scientific purposes or sharing animals between zoos.

“When elephants started to be found killed for their skin, there was clearly a whole new industry and a whole new trade going on,” said Belinda Stewart-Cox, director of conservation at Elephant Family.

Starting in January 2014, Elephant Family launched an investigation into the black market surrounding the skin poaching. Their team found online advertisements for beads made from Asian elephant skin and that illegal traders in China are the main customers for Myanmar’s poached elephants, which matched similar findings made by the Smithsonian.

When the skin is taken off, it’s a good inch thick. “Some of those pieces are being cut into cubes and those cubes dried and then turned into beads,” Stewart-Cox said. The beads were being sold as prayer bracelets, necklaces and other collectibles. Elephant Family tracked down online sellers on social media platforms like Baidu and WeChat. 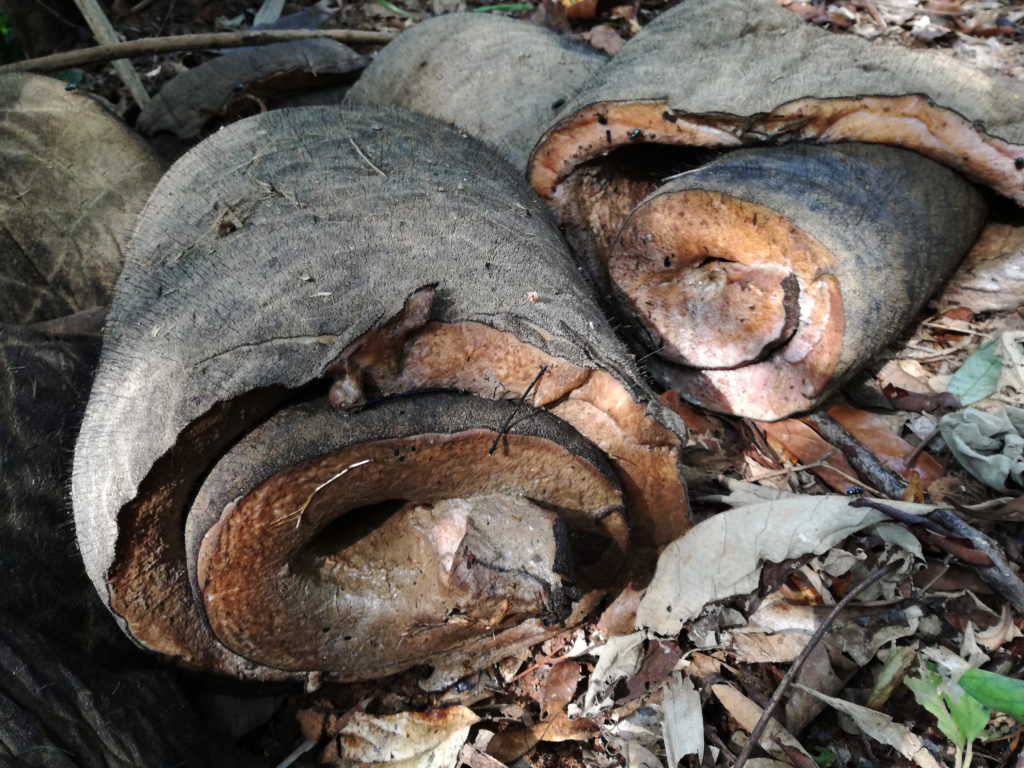 Rolls of Asian elephant skin. The poached skin can be more than an inch thick. Photo by Klaus Reisinger, Compass Films

“If you look at them, you think they look like garnets, rubies or some kind of red stone,” Stewart-Cox said. “But those subcutaneous layers [in the skin] include a lot of blood vessels, so there’s a lot of blood in that. Those beads look ruby red because they contain blood.”

The elephant skin is also ground into powder for pharmaceutical medicine. Sellers claim the skin can treat stomach conditions like ulcers, gastritis and stomach cancer.

China has a reputation for being a hub for the illegal wildlife trade, but it is hardly the sole culprit.

While tracking the illegal wildlife trade is notoriously challenging, multiple reports suggest the bulk of elephant ivory lands in China, the U.S. The commercial sale of ivory was banned in 1989 under the Convention on International Trade in Endangered Species of Wild Fauna and Flora (CITES) — though the treaty allows exception for South Africa, Zimbabwe, Namibia and Botswana to export other African elephant parts.

Moreover, China has made recent progress in its battle to reduce the nation’s demand for illegal elephant parts. In December, Chinese President Xi Jinping instituted a ban on domestic ivory trade as part of a joint arrangement made with President Barack Obama in 2015. In March, President Donald Trump partially reversed this ban, allowing elephant trophy imports.

“The ban was not an easy thing for China to do,” Stewart-Cox said. “But we need China’s help to crack down on this new trade.” 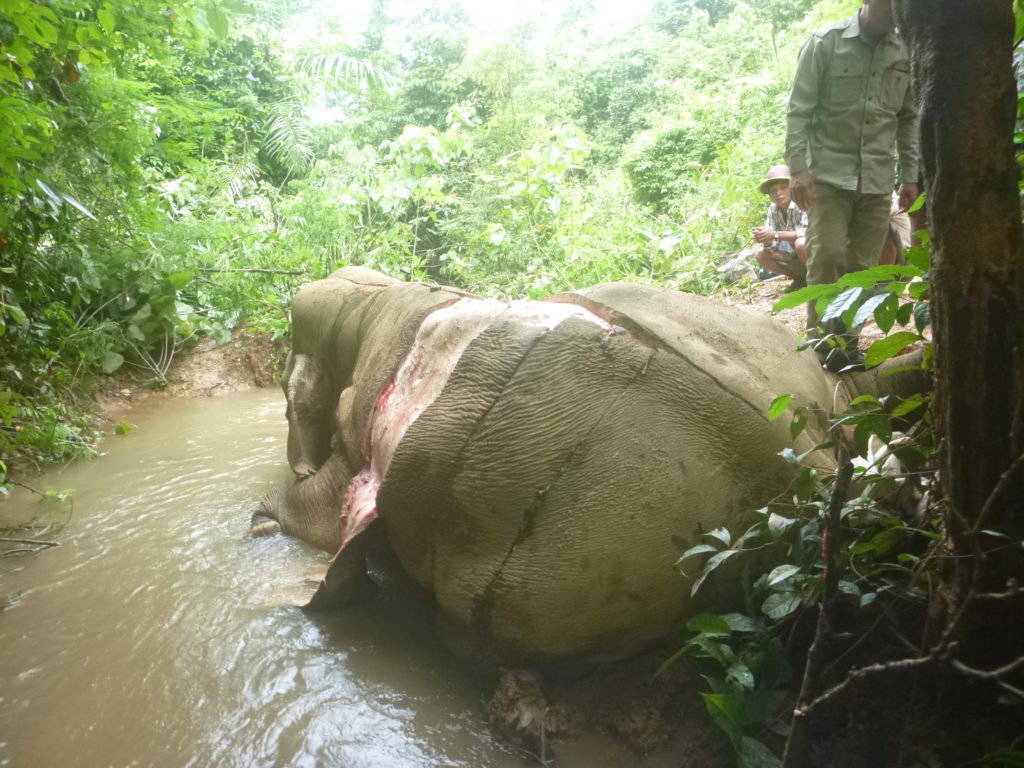 Under CITES, all trading of Asian elephant in any form is prohibited, except in rare cases such as biological samples for research purposes or the sharing of animals between zoos.

Chinese officials denied the findings of the Elephant Family’s report in April.

“The amount of elephant skin imported into China is very limited although importing elephant skin in China is not banned,” Meng Xianlin, executive director-general of China’s endangered species of wild fauna and flora import and export management office, said according to state media, in reference to their legal skin imports from Africa. “The report of the charity is cooked.”

It’s unclear if the sale of blood beads has spread to the U.S., Japan and Great Britain and other nations that rank among the most popular destinations for Asian elephant parts, according to CITES data.

To thwart potential sales of these skin products, the Smithsonian, U.S. Fish and Wildlife and Compass Films, a French production company working in Myanmar, have released public service announcements and created a community outreach program.

Leimgruber said education is the key to stopping demand for blood beads and skin powder — and by extension, putting an end to the poaching.

“Most people that purchase these products have no idea what they’re doing,” Leimgruber said. “That means we need to go to the places where the markets are and educate consumers about how damaging the impact is of what they’re doing.”

Editor’s note: This story has been updated to correct Belinda Stewart-Cox’s title. She is director of conservation at Elephant Family and was formerly the executive director of the Elephant Conservation Network..

Left: The poaching of African elephants, where they are murdered for their ivory tusks, is well-documented. But halfway around world in Myanmar, their cousins are 10 times more endangered and facing a new serious threat. Poachers are taking the skin of Asian elephants and turning it into ruby red jewelry. Produced by Nsikan Akpan