On tiny racetrack, scientists test self-driving cars of the future

In a robotics lab at the George Washington University, there’s a small-scale race track, complete with a loop-the-loop. A battery-powered car hurls itself around the room, flipping over jumps and around the vertical spiral. “They are really robust, so when a grad student destroys 10 of them, it doesn’t cost very much,” says Gabe Sibley, the lab’s director. No one is driving the fearless little machine — it navigates the course all by itself.

At the Autonomous Robotics & Perception Group at G.W., scientists teach robots and computers how to see.

“We worry about understanding the world, typically from the point of view of cameras,” explains Sibley.

The researchers at G.W. have “toys” of all shapes and sizes, from the small robotic cars to a full-sized 416 horsepower 2014 Lexus ISF sedan, which they drive around downtown Washington, D.C., testing a rig that uses lasers to detect pedestrians, obstacles and other cars. The car doesn’t drive itself yet, but it’s a critical platform for testing the technologies that could drive our vehicles in the future.

The technology in Sibley’s lab is always advancing, and the latest iteration looks like an ordinary cellphone. Equipped with the ability to make a quarter million 3-D measurements every second, the tiny sensor represents more than a decade’s worth of robotics research packed into a pocketable device. In partnership with Google, the Washington, D.C. university has been working on the phone, dubbed Project Tango, for more than a year.

The technology offers a leap for robotics engineers, specifically in the area of localization, or helping robots find their position in the world, said Nima Keivan, a postdoctoral student. Previous forms of the technology took up a closet, so a cellphone-sized device opens the door to many more possibilities. 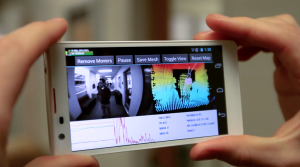 A cellphone-sized device captures 3-D information and displays it on screen.

Google introduced Project Tango in February as a technology that could augment future Android phones, help the visually impaired or map the insides of buildings. But the compact system could also become the eyes of an autonomous car or robot down the road.

Watch the video above to take a tour of the G.W. lab, and see through the eyes of a self-driving car.

Vanessa Dennis contributed to this report.