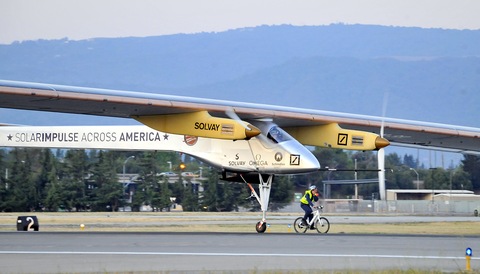 A member of the Solar Impulse crew rides an electric bike alongside the solar-powered plane as it lifts off from Moffett Field NASA Ames Research Center in Mountain View, Calif., on May 3, on the first leg of a trip across the United States. Photo by Josh Edelson/AFP/Getty Images.

Okay, it’s not that bad, but dang it takes a long time to get from place to place. The plane, a spindly, insect-looking thing called Solar Impulse HB-SIA, is cruising at 43 mph at a maximum altitude of 28,000 feet, which translates to 18 hours and 18 minutes to fly from San Francisco to Phoenix, where it landed on May 4. It’s next leg to Dallas, which could start as early as Saturday, is expected to take about 20 hours, depending on windspeed, according to Solar Impulse spokesperson Alenka Zibetto.

But here’s the very cool part: Powered only by sunlight, it will fly coast to coast without a lick of fuel. It is blanketed with nearly 12,000 silicon solar cells that drive its four electric motors and recharge four large batteries that store power. That storage allows it to fly at night when the sun is down.

The aircraft’s skeleton is made of carbon fiber tubes, and the wing spar, according to material provided by the team, “is formed of an internal honeycomb structure pressed between two layers of carbon fiber. This structure reproduces the cellular structure of honeycombs, ensuring very high resistance and maximum lightness.”

Its two pilots, Bertrand Piccard and André Borschberg, who fly one at a time, do so wearing a parachute and an oxygen mask, since the cockpit isn’t pressurized.

There are two Solar Impulse aircrafts, one of which suffered a setback in 2012 when the wing spar cracked under pressure during testing, postponing its planned around-the-world flight to at least 2015.

After Dallas, it will travel to St. Louis, then Washington D.C., ending in New York City, with the pilots switching off for each leg.

And while many are crowing about what the plane represents for the future of clean energy technology, a question still looms. At such speeds, could it ever be an efficient aircraft?

“For a solar power airplane to be commercially viable it has to be fast,” Bob van der Linden, chairman of the aeronautics division at the Smithsonian National Air and Space Museum, told the Christian Science Monitor. “That means jet power, not solar power.”

On its website, the company says that airline’s engines aren’t about to start functioning without fuel, adding that it is not attempting to revolutionize the aviation industry. In fact, it claims, “it would be stupid and pretentious to even attempt this.”

The plan instead “is to use the power of this airborne symbol to help change people’s minds about renewable energies.” Piccard added, “Our airplane is not designed to carry passengers, but to carry a message.”

What hurts more: Childbirth or getting kicked in the (male) groin? AsapSCIENCE takes on the question.

Correction: An earlier version of this post incorrectly stated that Solar Impulse HB-SIA was the first solar-powered plane to fly across the continental U.S. That record was set by the Sunseeker in 1990.