Spider-like Brain Cells May Be Active in Memory Making 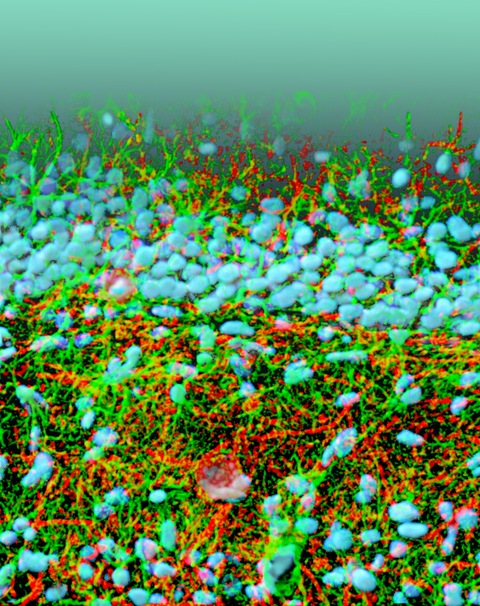 This image shows the interaction of astrocytes and neurons in the hippocampus of a rat. Astrocytes are stained green, neurons are shown in red, and cell nuclei in blue. (Mount Sinai School of Medicine)

A lesser-known brain cell may have a critical role to play in long-term memory formation, according to a new study.

Astrocytes are star-shaped glial cells with armlike extensions, and they weave among neurons in the brain. They are support cells, and act in concert with neurons in many nervous system functions. A study published Thursday in the journal Cell suggests that they are also critical to the process of making memories.

A form of glucose called glycogen is stored inside these spider-like cells. As glycogen breaks down, it releases a substance called lactate, which gets transported by special proteins into neurons. Scientists tested the importance of both the glycogen breakdown and the transport process to long-term memory function, and found that they both play a critical role in the ability to retain memories

The team of scientists studied rats, focusing specifically on the hippocampus, the brain’s memory center. When the rats approached a certain part of a box, they were met with a painful shock. Rats in the control group remembered where the shock occurred and continued to avoid the area weeks later. But rats that were treated with drugs that blocked the glycogen breakdown process developed a type of amnesia, and had little to no long-term memory of the shock.

“They avoid this context for such a short time,” said Cristina Alberini, an author of the study and professor of neuroscience at Mount Sinai School of Medicine. “They go in. They have no memory. And the effect persists if we test them at a later time point.”

But their short-term memory and learning, which is regulated in a different part of the brain, remained unchanged.

These memory impairments occurred when either lactate or the protein transporters that deliver the lactate to the nearest neuron were disrupted. Glucose, another source of energy, did not serve as an alternative to lactate.

But they did find that they could manually recover the memory function by injecting lactate into the hippocampus. “If we give lactate, then we can rescue the amnesia,” Alberini said.

In addition, molecular pathways important for long-term memory function required lactate, and when the lactate was blocked, those pathways were impaired.

That astrocytes can be a source of proteins that support neurons, and that there’s substantial crosstalk between astrocytes and neurons is not new, said Paul Aisen, a neurologist with the University of San Diego School of Medicine, who specializes in research on Alzheimer’s treatment. But the details, he said, are difficult to study and not well understood.

The Cell study, Aisen said, does suggest that targeting lactate transport might be useful for the treatment of memory disorders. “This is an elegant series of experiments that do indeed demonstrate an important metabolic link between astrocytes and neurons involved in long term memory…It is a long way from clinical application, but opens a fascinating new way of thinking about the treatment of cognitive impairment.”

Indeed, the next chapter of the research, Alberini said, will be to acquire a better understanding of what lactate does, and apply that to human pathologies. Alzheimer’s disease is a top priority, but Alberini believes that the research could also inform other memory impairment disorders, aging processes, and even diabetes.

“The more we uncover how normal memories work, the more we’ll have the knowledge to then look at diseases and hope to find where the problem is,” she said.