What squirrels can teach humans about frustration

YouTube viewers are well-acquainted with the squirrel genre: Thousands of videos that show squirrels going to great lengths to extract seeds from bird feeders, or humans trying to thwart their efforts, or the old favorite, squirrels stuffing their cheeks with nuts.

Squirrels are some of the wild animals we’re in closest proximity to, and we love either watching their antics or shooing them away. But maybe the popularity of squirrel videos also owes to the fact that we see some of ourselves in them.

This is part of what fueled Mikel Delgado’s interest in the fox squirrels she saw on the University of California, Berkeley, campus. Delgado, an animal behaviorist and doctoral student there, likes to quote from Charles Darwin’s book “The Descent of Man, and Selection in Relation to Sex,” in which the English naturalist proposed that the differences between humans and other animals aren’t as clear-cut as we might want to think.

“Nevertheless the difference in mind between man and the higher animals, great as it is,” wrote Darwin, “certainly is one of degree and not of kind.”

At the time the book was published, in 1870, Darwin’s idea didn’t catch on, said Delgado.

“It was controversial because people thought animals were machines and didn’t feel pain,” she said.

Inspired by Darwin, Delgado was intrigued by squirrels’ emotional worlds. Though fox squirrels chatter their teeth, they don’t really make any facial expressions like we do to signal our sadness, anger or surprise. The way to tell what they’re feeling, researchers have found, is to watch their tails.

When a predator like a dog is around, a fox squirrel runs up a tree. When it’s safely at the top, it whips its tail back and forth to look big and fearsome. Researchers call this s-shaped movement “flagging” and it means the squirrel feels really threatened. 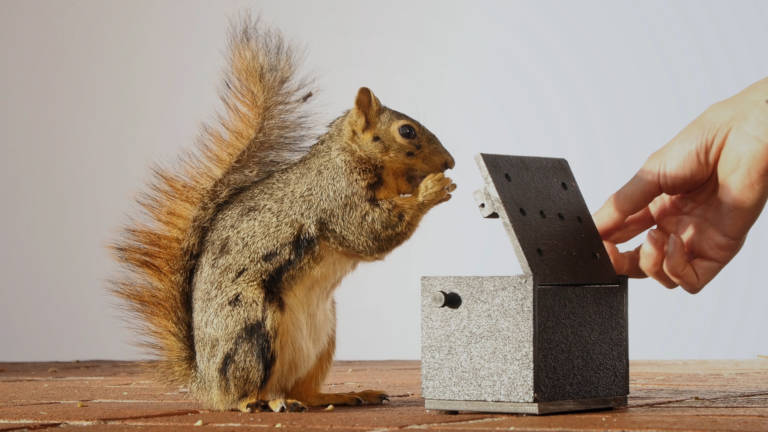 Delgado wondered what else she could learn from watching squirrels flag their tails. For instance, do they get frustrated, the way that people do?

Scientists have studied frustration in farm animals like pigs in France, hens in Scotland and trout in Norway, to see if it leads them to become aggressive, and to what degree. These studies were motivated by farmers’ desire to avoid situations in which their animals would attack each other and bring down productivity.

“He was pioneering this idea that we weren’t that different from other animals,” said Delgado. “He saw that when animals were in pain or aggressive towards other animals, their bodies were showing signals that appeared to be related to emotion.”

But Darwin’s writings were based on his observations, not on experiments.

“He didn’t have the evidence that we’d seek out today,” said Delgado. So she devised an experiment.

Fox squirrels love walnuts. So she lured some of the fox squirrels on campus down from the trees and taught them how to lift the lid of a black plastic box to find a piece of walnut inside. She coaxed the squirrels over to the box with peanuts, which are cheaper than walnuts, and encouraged them to open it.

When a squirrel lifted the lid with its snout, took the walnut out and ate it, she dropped another one into the box. By repeatedly putting walnuts in the box, Delgado trained the squirrels to expect one each time they looked inside. This training was important because frustration is usually defined as not getting what you expect.

For the third group, she locked the box. Of the three groups, these flagged their tails the most. They got aggressive, a hallmark of frustration. And they tried different ways to open the box. They bit it; they toppled it; they dragged it around.

“What we saw is that when the box was locked, they spent more time interacting with the box,” said Delgado.

That made her believe that perhaps frustration isn’t just a way of blowing off steam, but instead a way to gather up the energy to “brute-force” a new solution, kind of like kicking the vending machine when it eats your dollar. She thinks frustration might have an evolutionary purpose.

And this brings us back to squirrels and bird feeders.

“If you’re a squirrel and you’re trying to break into my bird feeder you could try to rip it open with your paws, you might start to chew,” said Delgado. “With all that energy, maybe by chance you accidentally knock the feeder. The idea is that between all these different attempts and the increased energy from being agitated, maybe that’s one way of solving the problem.”

Delgado warns that this hypothesis goes beyond the results of her experiment, which were recently published in the Journal of Comparative Psychology. But it might well be that temper tantrums are useful after all, and that pitching a fit is helpful to squirrels – and maybe to people as well.

This report was produced by KQED. You can view the original report on its website.