Hurricane Irma has hammered the Caribbean this week, devastating the islands with flooding and wreckage. As it churns north of the Dominican Republic, Haiti and Cuba, before setting its course toward the U.S., here are some numbers you should keep in mind.

25 is the percentage of bridges classified as structurally deficient in Miami-Dade county, according to the Naples Daily News.

55. The number of hours Irma has spent as a Category 5 hurricane, as of 3 pm E.T., making it the fourth longest on record. Irma will likely pass number three on the list — 2004’s Hurricane Ivan (60 hours) — by this evening. The storm started to pour over Saint-Martin, Saint-Barthélemy, Antigua and Barbuda, Anguilla and other Leeward Islands late Tuesday. At least 10 people died across the Caribbean, including a two-year-old child on Barbuda, where officials said 90 percent of structures had been destroyed.

185 miles per hour. The maximum sustained winds that directly pummeled these islands. Destruction also occurred through storm surge. Barbuda recorded eight-foot storm surges, and people on Saint Martin and Saint-Barthélemy reported massive flooding. Four people died on Saint-Martin and 60 percent of its homes are now uninhabitable. Anguilla also reported one fatality and said 90 percent of roads are out of commission.

Hurricane Jose, which upgraded to a Category 3 storm Thursday, is slated to hit the Leeward Islands Saturday. It’s the first time since 2008 that the Atlantic Ocean has developed 3 major hurricanes before Sept. 7, according to Colorado State University atmospheric scientist Philip Klotzbach.

900,000. Half the island of Puerto Rico — 900,000 people — lost electricity Wednesday night and 50,000 were without access to water, even though the eye of Hurricane Irma passed north of the U.S. territory.

Warning: This video is quite traumatic. Tortola today after #hurricaneirma. Most buildings completely destroyed. Many left homeless. Beyond tragic. My deepest wishes go to all those affected. Still no news from Virgin Gorda. #bvi #hurricaneirma #destruction #devastation #tragic #climatechange #hope

34. The next 24 hours should dictate where and if Irma makes landfall, and this final determination may rely on a forecast model created by 34 European nations. As Eric Berger reported for Ars Technica, the European model — or  European Center for Medium-Range Weather Forecasts — is riding a hot streak of consistency right now:

Often, the model produced by this intergovernmental organization of 34 nations generates the best forecasts for hurricane tracks. In some cases, during Hurricane Harvey, it even exceeded the skill of human forecasters at the National Hurricane Center.

For this reason, the European model now has an outsized influence on the forecasts for hurricanes around the world, including those in the Atlantic, and in particular Hurricane Irma, which presently threatens the Caribbean Islands as well as the southeastern United States.

The European model excels because it takes longer — once every 12 hours — to pump out a more detailed supercomputer simulation, relative to predictive models created in the U.S. The National Hurricane Center relies on both to build the cones for its hurricane warning maps, but the European model had Irma tracking toward Miami as early as Wednesday afternoon, while other models pushed the storm further east and out to sea. The latest forecast from the European model continues to project landfall in the Florida Keys, near Marathon, Berger reported.

On Thursday, the National Hurricane Center issued a hurricane watch for the southern tip of Florida. They predict the storm will create a 20-foot storm surge for the Bahamas before reaching the U.S. with 145-miles-per-hour winds.

25 is the percentage of bridges classified as structurally deficient in Miami-Dade county, according to the Naples Daily News. When Hurricane Andrew struck in 1992, much of the $25 billion in structural damage was caused by the storm’s 160-mile-per-hour winds, though nine- to 16-foot storm surges tossed boats ashore like softballs. Miami-Dade evacuation orders were expanded on Thursday.

If Irma hits south Florida as a Category 4 during high tide, the region could experience inland flooding across Florida’s southernmost 100 miles. Meanwhile, less than half of the homes in Florida’s coastal counties have flood insurance. 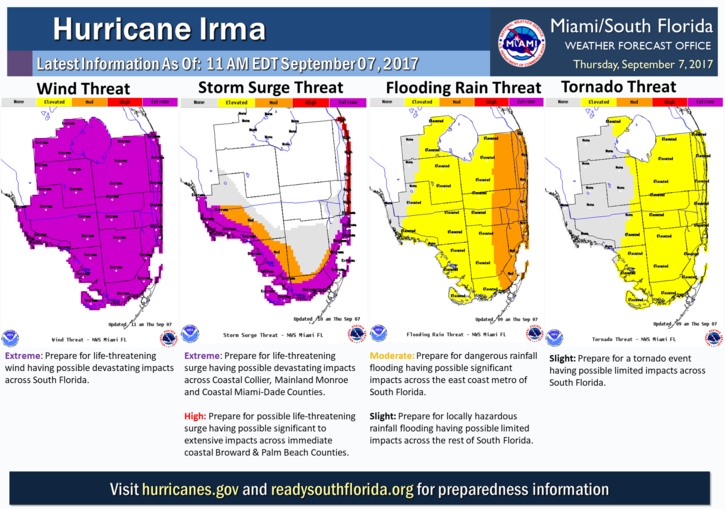 7 trillion. MIT meteorologist Kerry Emanuel told the Associated Press the amount of energy in Hurricane Irma is approximately 7 trillion watts or more than all of the bombs dropped during World War II. This dynamo led the storm to maintain winds of 185 miles per hour for 37 hours, a record for tropical cyclones in the Atlantic Ocean. Irma has been a major hurricane for nearly four days, trailing only 1995 Hurricane Luis in longevity.