Why are starfish dying off the Pacific Coast? The reporters who broke the story for NewsHour answered your questions

Along the Pacific Coast, tens of thousands of starfish are dying, and no one knows why.

In January, Earthfix reporter Katie Campbell and diver and citizen scientist Laura James reported on the story for PBS NewsHour. Since then, the video has reached nearly 1 million views on YouTube and has received countless of comments and questions about the sick starfish who are literally ripping themselves apart. 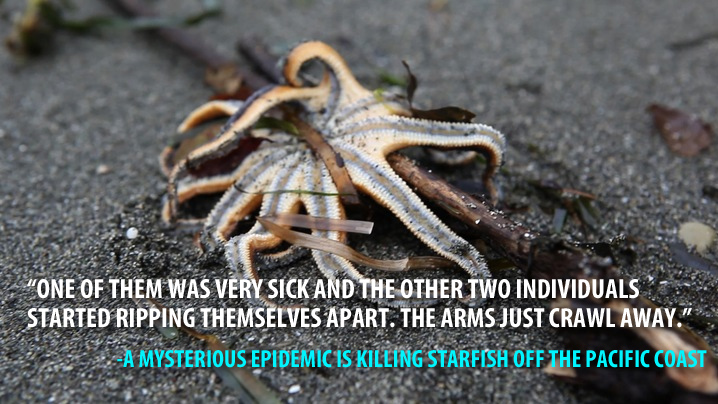 Thousands of starfish are dying off the Pacific Coast.

During a reddit AMA on Monday, Campbell and James answered questions about the mysterious epidemic. Did you miss it? Here are some highlights:

Reddit user 95688it: Is it definitely a disease or virus?

Katie Campbell: The marine epidemiologists I interviewed said it certainly looks and acts like a disease. But they’re reluctant to 100% declare it a disease until they know for sure. They’re conducting exhaustive DNA sequencing against all the known viruses, bacteria, protozoa, fungi to see try to figure out the exact fingerprint of the disease, if it is indeed a disease. That’s why scientists prefer to call it Sea Star Wasting Syndrome.

Reddit user Tgg161: Is it correct to say that each starfish leg has its own ‘brain’?

Katie Campbell: Starfish lack a centralized brain, but they do have a complex nervous system and they can feel pain. Many viewers have asked whether starfish can regenerate a new body from a leg that walks away, but in this case the starfish are dying too quickly so they don’t have a chance to re-grow body parts once they’ve ripped themselves apart.

Reddit user r_antrobus: Aside from suicidal starfish, what’s the craziest thing you guys have seen underwater?

Laura James: Other than the entertaining antics of other divers, I’ve been followed by octopus for whole dives, had assorted gear stolen by them and been adopted by a Wolf eel. I’ve dove on deep shipwrecks with fish that are 3 times as big as their shallow counterparts…. We’ve seen wolf eels hatching and thousands of baby octopus creating a constellation of life in the water column, only to be instantly consumed by a passing school of hungry herring.

Reddit user Prime_Axe: How exactly are they ripping themselves apart?

Katie Campbell: Here’s what the process looks like in the sunflower star: They seem to develop lesions on their skin and they twist their arms unnaturally into knots. It’s almost as if they’re trying to cover the lesions on their skin, like an arm Band-Aid. They start to look deflated or not as plump as normal. And then their arms start walking in different directions. The place where the arms connect to the body is stretched until it just gives way. I don’t know what starfish gonads look like exactly, but scientists tell me that their gonads spill out and they die in a matter of hours.

Reddit user Spazmodo: Do you think this is caused by a biological illness or could it be related to Fukushima?

Katie Campbell: The short answer is almost definitely no. Scientists do not see a connection between the massive die-offs of starfish along the Pacific shores of North America and Japan’s Fukushima nuclear disaster. Here are some reasons why: 1. Recent tests for radiation in seawater along the west coast have found “no detectable Fukushima cesium.” … 2. The die-offs are patchy. This doesn’t line up with a giant plume of radiation moving across the Pacific. They’re popping up in certain places like Seattle and Santa Barbara and not in others, such as coastal Oregon, where there’s only been one report. 3. Sites closer to the Pacific shorelines are being affected sooner than places farther out to sea. And there have not been reports of starfish die-offs in Hawaii or Japan. If Fukushima were the cause, it would stand to reason that starfish closer to the source would also be impacted. 4. Sea star wasting syndrome predates the Fukushima nuclear disaster. Some of the earliest accounts of sea star wasting took place in the late 1990s. The Fukushima nuclear disaster happened in March 2011.

Reddit user hoodrich0: Why should I care about this?

Katie Campbell: Sea stars are voracious predators, like lions on the seafloor. They gobble up mussels, clams, sea cucumbers, crab and even other starfish. That’s why they’re called a keystone species, meaning they have a disproportionate impact on an ecosystem, shaping the biodiversity of the seascape. When a predator species is removed, the prey species can take over and go wild and they end up overgrazing …. it can end up reducing the overall biodiversity of an area.

Laura James: From a human angle, think about the first time you were at a beach or visited the aquarium. One of the first sea creatures that our children can actually ‘touch’ and experience is a sea star (they don’t run away and inhabit the intertidal zone so easy to find). The sea star helps us build an emotional connection from terrestrial world to the sea. They help extend our world beyond the shoreline. Cousteau said “People protect what they love”, I add to that statement “but they must know it to love it”. Kids and adults alike love starfish, and that connection helps build awareness and learn to love our ocean, and hopefully see them as something worth protecting.