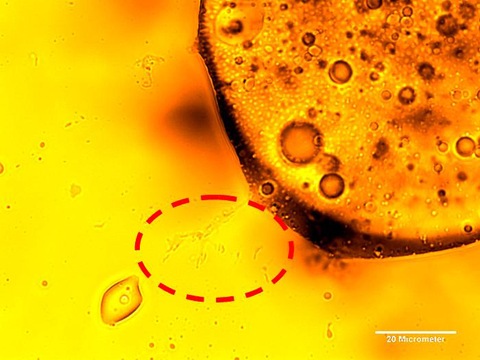 Oil-eating bacteria proliferated below the surface of the Gulf of Mexico this summer, helping to break down and clean up an underwater oil plume that stretched miles from the Deepwater Horizon wellhead, according to a study released Tuesday by the journal Science.

The study is the latest update in the ongoing debate over what has happened to the bulk of the 4.9 million barrels of oil that spilled from the well, and it suggests that the oil may be disappearing relatively quickly from the deep-sea environment.

Just last week, researchers at Woods Hole Oceanographic Institution confirmed that much of the oil from the spill ended up suspended in a deep-sea cloud near the wellhead, rather than floating to the surface of the water. They released the most precise map yet of a 1.2-mile-wide plume of microscopic oil compounds that floated 3,000 feet below the surface of the water.

But the map was based on data taken in June, before the well was capped. It didn’t address what has happened to that underwater oil since the leak stopped, and how much now remains in the ocean. Oil-eating microbes are plentiful in the Gulf of Mexico, helping to break down oil from natural seeps. But no one is sure how fast that breakdown is occurring with the unprecedented amount of oil deep underwater in the Gulf, where the cold temperatures — about 5 degrees Celsius — could slow down the process.

In Tuesday’s study, microbiologist Terry Hazen and his colleagues at Lawrence Berkeley National Laboratory looked at the amounts and types of bacteria in the oil plume at the end of May and beginning of June. They found that a type of oil-eating bacteria adapted to the cold water was twice as plentiful inside the oil plume as outside, and that these bacteria — a newly-discovered species related to the Oceanospirillales — made up 90 percent of all the bacteria in the oil plume. The researchers also found DNA and fatty acids in the water that are signs of oil breaking down.

They also found that the bacteria were breaking down the oil without depleting the oxygen level in the water as much as expected. That’s an important wrinkle, because last week’s study by the Woods Hole researchers found that the oxygen supply in the plume water remained high, avoiding the feared deoxygenated “dead zone” harmful to plants and animals. But the new study suggests that despite the fact that oxygen levels remained high in the water, the bacteria were still hard at work.

“The findings are consistent with each other — which I think is pretty neat to see,” says Richard Camilli, a researcher at Woods Hole Oceanographic Institution and the lead author of last week’s study.

The new evidence of oil-eating bacteria in the plume adds to the ongoing debate over how fast the deep-sea oil is disappearing. The federal government said earlier this month that such deepwater dispersed oil was biodegrading quickly, and that 75 percent of the spilled oil had been accounted for. Some outside researchers, however, have questioned that conclusion, arguing that the oil is biodegrading more slowly than the government scientists assume. Tuesday’s study seems to offer some support for the government’s findings.

In fact, Hazen says that he and his team have continued their monitoring throughout the summer, and that as of about three weeks ago the oil plume was no longer detectable.

“We’ve been out there continuously,” he says. “Once the oil flow stopped on July 15, within two weeks we saw most of the plume disappear.”

Ian MacDonald, an oceanographer at Florida State University, says that the new study is good news.

“It certainly shows that the microbial community can and is responding to this addition of oil to the deep water,” he says.

However, he cautions that many questions remain unanswered — such as what has happened to the methane released into the water along with the oil, what percentage of the total oil released ended up in this deep-sea plume, and the environmental effects of changing the deep-sea microbial community.