Supermassive black holes spew hot winds and turn galaxies into stellar wastelands. This malediction comes from astronomers at the Sloan Digital Sky Survey, who spotted a galaxy scorched by interstellar warming. The hot winds keep new stars from being born.

The discovery, reported Wednesday in Nature, establishes a new class of galaxies — dubbed red geysers. These geysers may cast a bleak future for our Milky Way, which harbors its own supermassive black hole at its center.

A galaxy grows by adding stars, which can happen in a few ways. Its gravity can attract another galaxy, causing a merger that tosses stars and whole solar systems into new arrangements. Or alternatively, a galaxy can mature by acquiring gas — either from the interstellar medium or by recycling it from dying, geriatric stars. These materials start hot, but then cool and condense into stellar embryos — the first stage of a star.

“Galaxies start out as star-making machines with a simple recipe: gas plus gravity equals stars,” Kevin Bundy, an astronomer at the University of Tokyo, said in a statement. Bundy is a member of the Sloan Digital Sky Survey, an international collaboration of scientists creating 3-D maps of the universe.

While scanning the cosmos, Bundy and his SDSS colleagues stumbled upon a galaxy that violated this maturing principle. It had the gas supply, but lacked new stars.

“Here we have a galaxy that has everything it needs to form new stars, but is dormant. Why is that?” Bundy said of the galaxy, which the team nicknamed Akira after a Japanese comic book character. 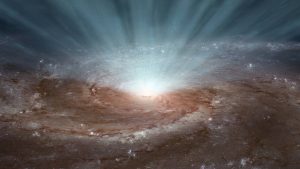 A supermassive black hole, that’s why.

Astronomers believe supermassive black holes sit at the center of most galaxies. (The one sitting at the center of our Milky Way could hold 4.1 million suns.) The tremendous gravity of a supermassive black hole sucks materials into its core like a whirlpool, pulling entire star systems into oblivion. However, this motion can also eject gases, creating massive gusts of celestial wind.

Bundy and his colleagues measured the velocity of these winds by using an SDSS observatory in New Mexico called MaNGA that captures detailed maps of whole galaxies.

“If we looked just at the center of the galaxy like we used to, we could have learned about the central black hole, but we would have missed the story of how it affects the rest of the galaxy,” Edmond Cheung, an astronomer at the University of Tokyo and study leader, said of the MaNGA observatory. “Another reason is that the wind from supermassive black holes comes and goes quickly, so catching the wind red-handed is hard.”

The researchers found the black hole winds move swiftly — at about 447,000 miles per hour. If one of these zephyrs left Earth on Monday morning, it would reach Mars by Friday afternoon. The researchers believe these fast-moving winds keep gases across the galaxy from cooling and creating new stars.

“You can think of these winds as super-heating the atmospheres of galaxies,” Cheung said. “As soon as any gas starts to cool, it gets blasted by this wind, like water droplets turning to steam.”

Artist’s rendition of the galaxies Tetsuo (left) and Akira (right). Akira’s gravity pulls Tetsuo’s gas into its central supermassive black hole, fueling winds that have the power to heat Akira’s gas. The action of the black hole winds prevents a new cycle of star formation in Akira. Illustration by Kavli Institute for the Physics and Mathematics of the Universe

Akira’s giant black hole is active, meaning it is feeding on nearby stellar material. In this case, Akira sucks matter from a galaxy — nicknamed Tetsuo — located 104,000 light-years away. This intergalactic vampirism fuels Akira’s powerful windmill.

The Milky Way’s supermassive black hole is dormant, but it could switch to being active in the distant future, according to astrophysicist Marc Sarzi of the University of Hertfordshire in England.

“Central-black-hole activity can be triggered several times,” Sarzi wrote in in a commentary. “Many galaxies that do not presently show [wind] outflows could have been stirred, or their gas expelled, by a previous episode.”

And this red geyser may not be alone. Akira is an elliptical galaxy, so unlike the spiral-shaped Milky Way, Akira’s star systems are amassed in a giant blob. Some astronomers believe these galaxies are the dominant form in the universe.

Up to 75 percent of these galaxies contain the fuel for new stars, Sarzi wrote, but “stars are observed to form in only 10–20 percent of such galaxies.”

Left: The supermassive black holes in active galaxies can produce narrow particle jets (orange) and wider streams of gas (blue-gray) known as ultra-fast outflows, which are powerful enough to regulate both star formation in the wider galaxy and the growth of the black hole. Inset: A close-up of the black hole and its accretion disk, the diffuse material orbiting around the black hole. Illustration by European Space Agency/AOES Medialab