Take a close look at the photo above — you just might be witnessing the birth of star. It’s a rare image that depicts the center of our galaxy, the Milky Way, and it was captured by the Atacama Pathfinder Experiment (APEX) telescope in Chile. This photo, along with a swath of others released today, complete a special survey of Earth’s southern skies by providing the broadest map to date of the coldest parts of our galaxy, where stars are born.

“The important part of the survey is that you get a new roadmap. With it, we can find all of the raw material for star formation in our Milky Way that was previously hidden from view,” said Friedrich Wyrowski, an astronomer and APEX scientist at the Max Planck Institute for Radio Astronomy in Bonn, Germany. “All of these measurements have been done in many external galaxies where we have a global view, but it’s much more difficult in our own galaxy.”

To chart this roadmap, APEX sits among the skies — 16,700 feet above sea level on Chile’s Chajnantor Plateau. There, its 39-foot dish peers into the universe and measures light radiation. Visible light has short wavelengths (400–700 nanometers). Radio waves are the opposite, with wavelengths stretching as far as millions of meters. For this survey, the APEX telescope wanted to capture light wavelengths somewhere in the middle — in the submillimeter range. 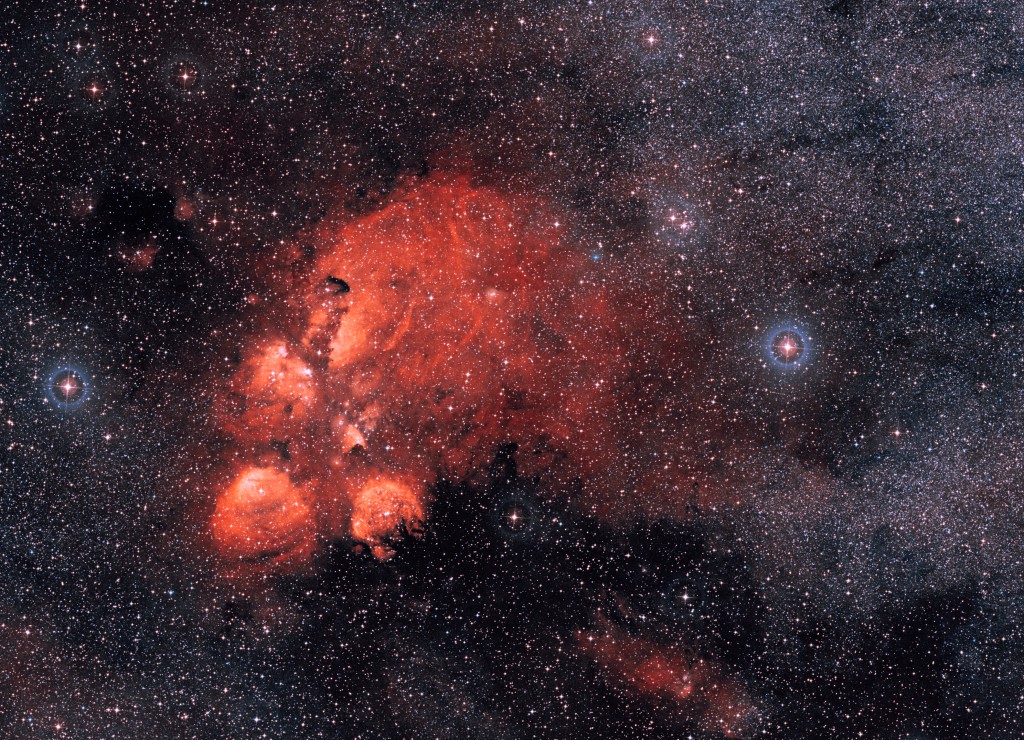 That’s because light radiation in this submillimeter range comes from the most frigid objects in universe, namely cold dust. Warm cosmic dust would be much like the dust in your room in terms of temperature. Cold dust, by contrast, is much much colder at -454 to -436 degrees Fahrenheit, which is barely warmer than absolute zero.

Cold dust often resides in the densest parts of the universe, Wyrowski said, where gas and dust molecules are packed into tight spaces because of gravity. As the pressure builds, this dense cloud of molecules becomes hotter until — BOOM! — a fusion reaction ignites and a star is born.

To spot cold dust, the APEX telescope comes equipped with a sensor called LABOCA that is itself ultracold. By cooling this sensor to less than 0.3 degrees above absolute zero, it has a high sensitivity for submillimeter radiation coming from cold dust. LABOCA also has a wide field of view that is equal to one third of the diameter of the full moon, so it can capture huge chunks of the sky. 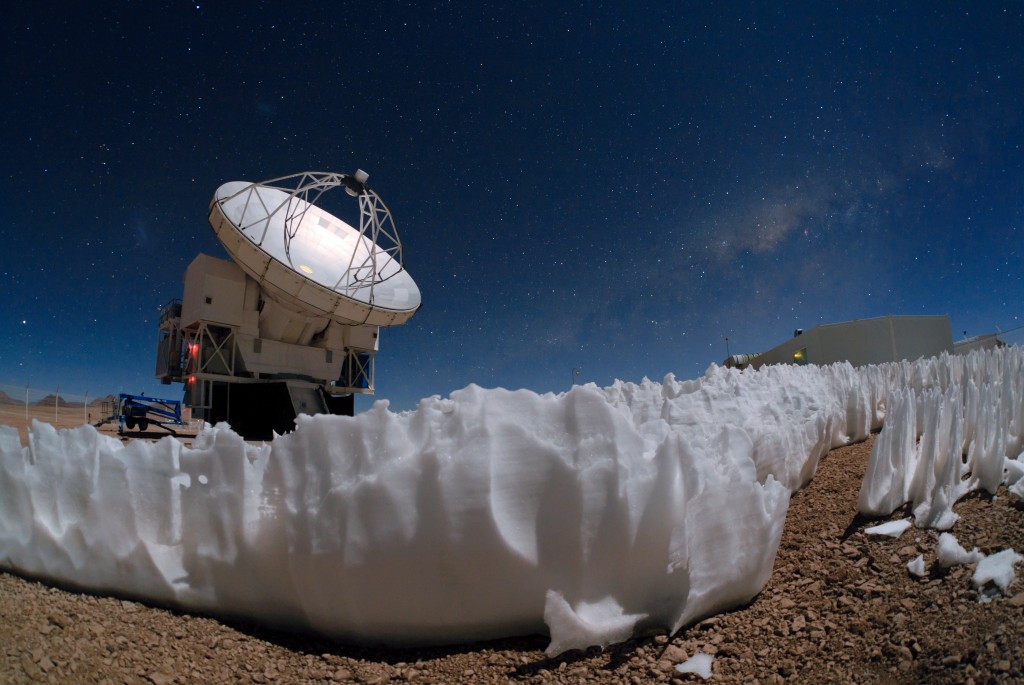 The Atacama Pathfinder Experiment (APEX) telescope is one of the tools used by European Southern Observatory to peer beyond the realm of visible light. Clusters of white penitentes — thin spikes of hardened snow or ice — can be seen in the foreground. Photo by ESO Photo Ambassador Babak Tafreshi 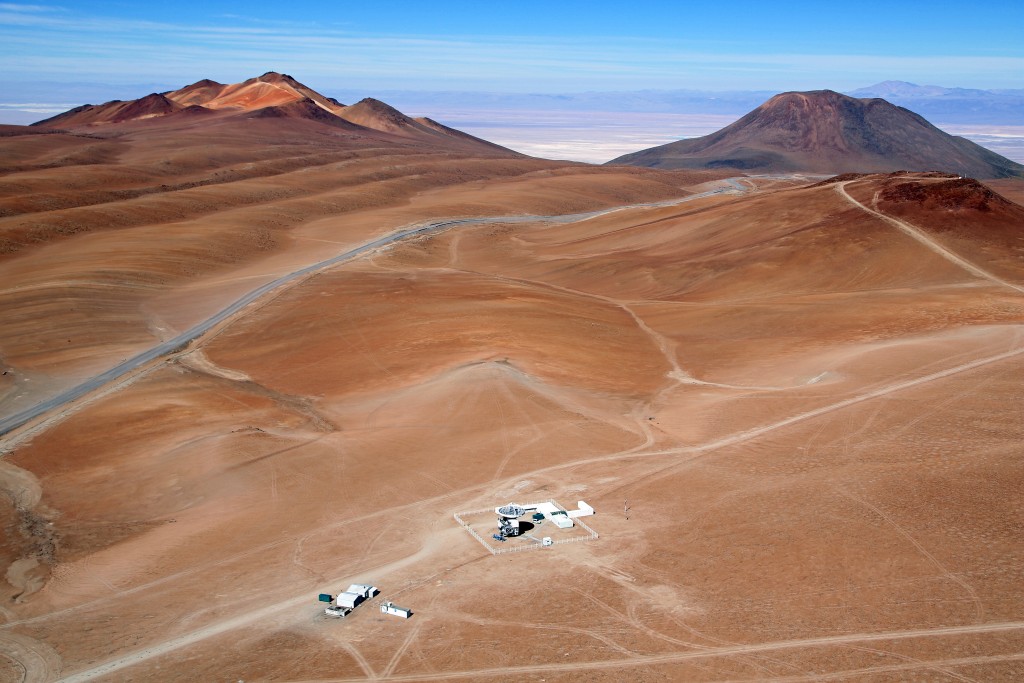 Aerial view of the APEX telescope on the Chajnantor Plateau in Chile’s Atacama region. Photo by Clémentine Bacri and Adrien Normier/ORA Wings for Science/ESO 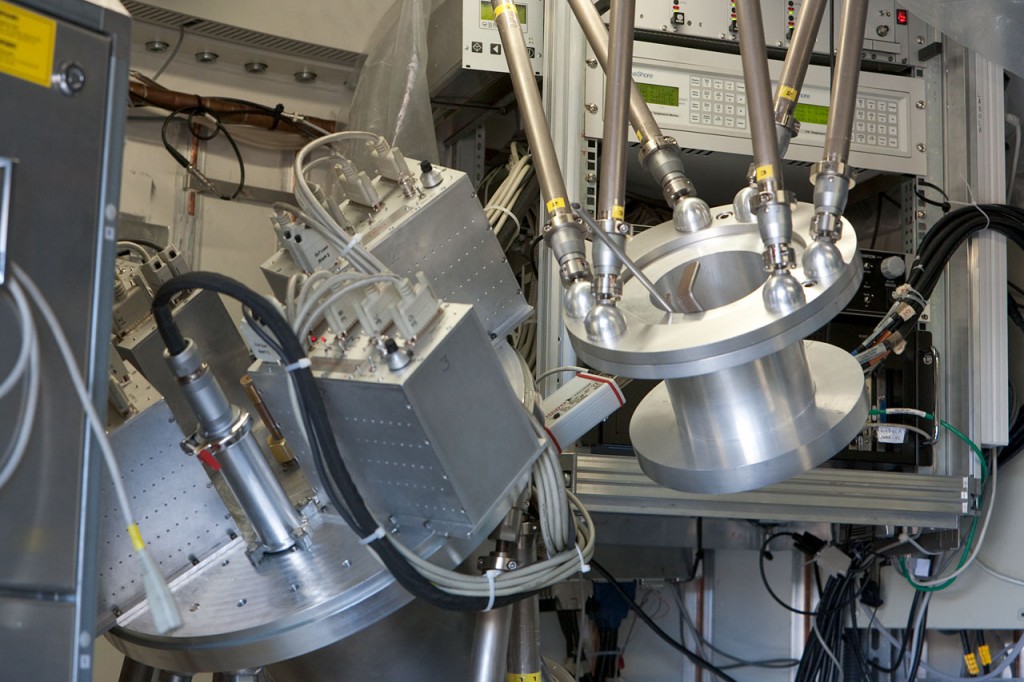 The LABOCA Camera installed on the APEX telescope. LABOCA is a ‘thermometer camera’ with 295 detectors and wide field of view to measure the cold universe. Photo by European Southern Observatory

“Water vapor in our atmosphere absorbs much of the radiation from the cold dust that we want to detect. Building a telescope at a high altitude and in one of the driest places on Earth in Chile gets rid of most of this interfering water vapor,” Wyrowski said.

Here, you see a combination of recordings of different wavelength. The red comprises measurement of cold dust from ATLASGAL and European Space Agency’s PLANCK satellite. In blue, you see infrared wavelengths or rather warm dust. In some places, you’ll see in the blue, darker filaments that look like they’re being filled with red, but what’s really happening is that cold material hides the view of the warmer dust. You may notice long filaments in red. A lot of star formation occurs in those filaments, which are very cold and dense, Wyrowski said. Those dense clumps continue to collapse, out of which stars form. You may also see bubbles. Some of the bubbles are due to stars that have already formed.

“As soon as you go to the Southern hemisphere to a location like Chile with APEX, you get access to the whole Milky Way,” Wyrowski said. “For example, the center of our Milky Way is on the southern part of the Earth’s sky. Here in the North, it isn’t very visible above the horizon.”

ATLASGAL’s map of cold dust can now be combined with infrared readings, such as as those from NASA’s Spitzer Space Telescope, to fill in the early picture of star formation. As cold dust packs tighter and warms up, it begins emitting infrared rays, before ultimately exploding into a visible star.

This video basically shows the milky way at different wavelengths. It starts with visible light — how you might see it with the naked eye or a very good camera. Then it goes to the near-infrared, where you see more features that represent parts of the universe that aren’t quite hot enough to be stars. “Here, you still see a lot of these very dark lanes, similar to the visible part. It’s not that stars are missing but it’s cold dust obscuring our view onto the star formation,” Wyrowski said. ATLASGAL has now revealed these cold obstructions.

“Only at submillimeter wavelengths are we able to penetrate through all the dust to see these coldest parts of the star-forming regions. That allows us to find the most massive clumps, which will lead to the formation of very luminous stars,” Wyrowski said.

The most luminous stars form rapidly in the coldest parts of the Milky Way, and they dictate the appearance and shape of our galaxy, because they have very strong outflows and winds that push around interstellar material. Ultimately, these stars will die as a supernova, again injecting lots of energy into the interstellar medium, forcing another batch of cold dust into a corner and sparking a star.

“To find all of these birthplaces for massive stars will help us understand how our Milky Way will evolve,” Wyrowski said.