In a control room atop a 16,500-foot mountain in Chile’s Atacama desert, Shep Doeleman and his international team of scientists are pulling the “heart” out of a $1.4 billion telescope. They are removing the atomic clock that the telescope relies on to read signals from space, and replacing it with a better one, one that won’t lose a second for the next hundred million years.

“Basically what we’ve done is perform a heart transplant for ALMA,” said Doeleman, an astronomer at MIT and the Harvard-Smithsonian Center for Astrophysics.

It’s a delicate operation. Scientists wear oxygen tanks so they don’t pass out from the altitude. Special housing protects the atomic clock from Chile’s violent earthquakes. Doeleman and his team won’t open the casing to show us the clock, especially while they’re running tests. It is too sensitive, and they don’t want to risk jarring it.

Doeleman holds a device in his hands that they are using to test the new clock. It’s a clock too, but it looks more like a bomb — which made getting through airport security from the U.S. to Chile tricky, he said.

If their operation is successful, the most powerful radio telescope in the world, the Atacama Large Millimeter/submillimeter Array, will join 11 international observatories capture the first-ever image of a black hole. PBS NewsHour recently traveled to Chile to meet some of the scientists behind this international collaboration. 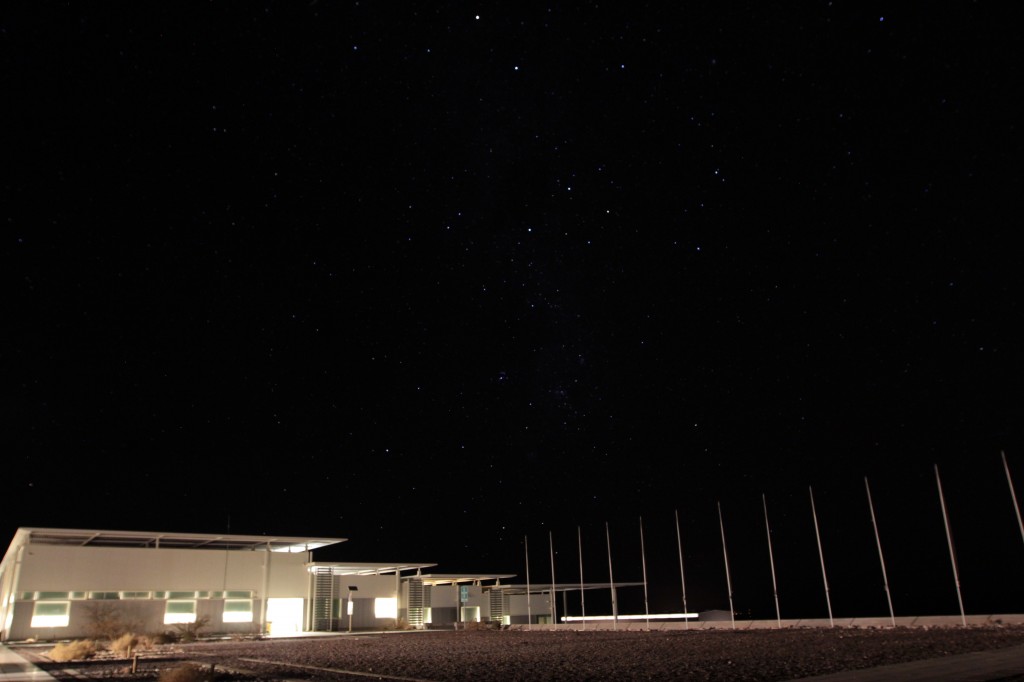 ALMA’s Operations Support Facility at night, just as most astronomers are getting to work. Photo by Joshua Barajas/PBS NewsHour

When we arrived at ALMA’s low site — at 9,500 feet above sea level — Richard Simon met us in the control room there. He was the astronomer-on-duty at ALMA that week from the National Radio Astronomy Observatory. He towers over the other scientists and engineers; at 6’10” tall, he may be the world’s tallest astronomer, he joked. At 9 a.m., the control room was fairly empty — just two people tapping away at the circle of computers. Unfinished puzzles were strewn across a table. Above, monitors showed the antennas at the high site.

In the middle of the night when ALMA takes most of its observations, this room is filled with scientists from all over the world, he said. ALMA is run by a conglomeration of radio astronomy organizations from Europe, Canada, Japan, Chile and the U.S.

Simon rubbed his eyes. He’d been awake for more than 18 hours, and just finished his overnight shift. Earlier that morning, Jupiter and Venus had passed each other in the sky. The image ALMA scientists captured looked as if Jupiter and Venus were flashing a “thumbs up”. They printed the image and tacked it up in the control room, on a white board atop shift schedules and notes.

How does it feel working 16,500 feet above sea level? Scientists at the ALMA observatory in Chile report.

It’s images like that which make dealing with high altitude sickness, long shifts, nausea and the driest desert in the world worth it, Simon said. And the prospect of seeing a black hole is key to ALMA’S existence.

“We are reaching out to the universe to study these mysteries,” Simon said. “The black hole at the center of our galaxy is something that wasn’t even imagined a few decades ago.”

Black holes are voracious eaters that swallow everything they can — dust clouds, stars, planets and other space debris — and they’re surrounded by what’s known as an event horizon, the area where the gravitational pull is so strong that nothing — not even light — can escape. 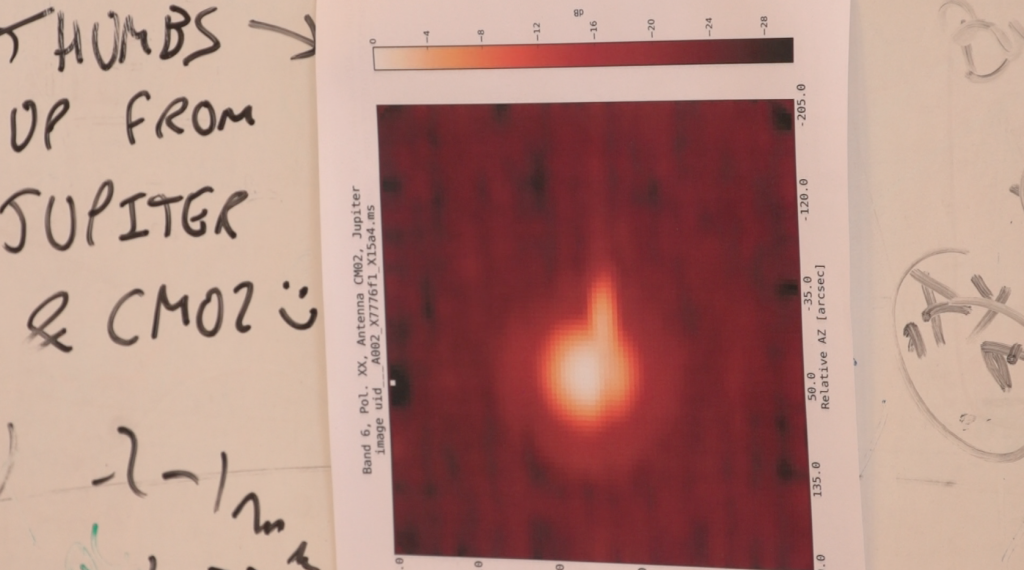 Jupiter gave ALMA scientists’ a “thumbs up” as it passed Venus on August 18th. Photo by Joshua Barajas/PBS NewsHour

“Black holes are some of the most exotic objects in the universe,” Doeleman said. “They come about when matter gravitationally collapses in on itself, when the atomic forces that normally hold, let’s say, a rock into its shape are overcome by gravity and everything becomes pulverized and crushed down into a single point.”

Einstein’s theory of general relativity predicted the existence of black holes in 1916, and to date, they’re the best explanation we have for many phenomena in our universe, Doeleman said.

But how do you see something that is, by definition, unseeable?

Other instruments have been able to observe and measure the effects of a black hole on stars, planets and light, but no one has ever actually seen a black hole, said David Rabanus, instruments manager for ALMA.

“There is no telescope available which can resolve such a small radius,” he said. “It’s a very high-mass black hole, but that mass is concentrated in a very, very small region.”

Without an image of one, no one has been able to confirm that black holes even exist, Doeleman says.

This Earth-sized telescope is science’s best hope of seeing one, Doeleman said. And it relies on a technique called very long baseline interferometry, or VLBI.

VLBI works in the same way that ALMA’s 66 antennas combine to make one telescope, only on a much larger scale, Simon said. The antennas are spread out across a wide area. As radiation from space hits the antennas, the data is sent to the correlator, ALMA’s “brain”, which pieces the information together to make an image. ALMA’s atomic clock measures exactly when the waves of radiation hit the receivers.

ALMA’s antennas are the most precise and sensitive in the world. Keeping them working means cooling the receivers to 3 or 4 degrees Kelvin, or almost absolute zero, Rabanus said. A blue drum called a cryostat nests inside each 100-ton antenna, chilling the receivers to the point where they can see the coldest objects deep in space.

“Cold clouds, cold gases, which are maybe 20 Kelvin only…We have to be colder than that in order to receive it. If we were warmer than those we would actually send out that radiation,” Rabanus said.

The receivers aren’t the only highly sensitive equipment. Each antenna’s dish needs a very specific surface texture to pick up minute radiation waves from space. The roughness of the surface needs to be accurate to within 50 microns, or the width of a human hair, Rabanus said. 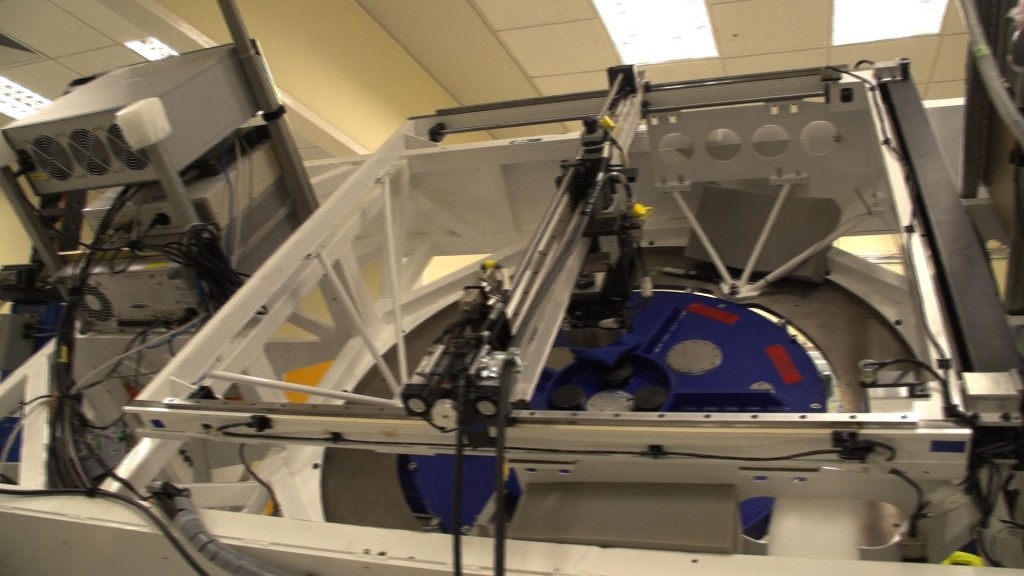 In the lab at ALMA, engineers work on testing and maintain cryostats, the big blue drums that keep the receivers at 3 or 4 degrees Kelvin — cold enough to receive faint radiation from space. Photo by Rebecca Jacobson/PBS NewsHour

Those antennas are what will boost the Event Horizon Telescope’s sensitivity by a factor of ten, Doeleman said. Still, the observatory can’t do it alone.

To get a wide enough “lens” with a high enough resolution to see a tiny black hole, the Event Horizon Telescope connects observatories around the world — from Chile, to Mexico, Hawaii, California, Spain and all the way to the South Pole. To sync all these observatories up, every telescope needs to use the same atomic clock — hence ALMA’s surgery.

Together, they will act as a single telescope, peering 152,844,259,702,773,820 miles past stars and planets, through gas clouds and dust to catch a picture of Sagittarius A*, the supermassive black hole at the center of our galaxy.

There, a cloud of space dust, simply called G2, is circling the black hole. If it falls in, the edge of that black hole — called the event horizon — will light up, the brightest it has been in 100 years. The black hole will cast a shadow against that flare.

“Einstein’s equations tell you exactly what the size and shape of that shadow should be, so if we could image a shadow we’d be able to test Einstein’s theories in the one place where they might really break down — at the edge of a black hole,” Doeleman said.

Dimitrios Psaltis, a theoretical physicist at the University of Arizona, admits he’s hoping to see something unexpected emerge from the data.

“This is the horse we’re betting on,” Psaltis said. “Most people go into fundamental research not because it’s exciting being on a computer 18 hours a day. We do it in hope that we hit gold and make a fundamental discovery that will be remembered. This project has that chance.”

If the shape of the shadow doesn’t match Einstein’s equations, it will be a transformative time for physics, Psaltis said. It will give the field a chance to move forward.

And if it matches, and Einstein’s theory of general relativity is confirmed?

“That would tell us that Einstein was on the right track, that all methods that rely on general relativity are sound,” Doeleman said. “It would be a wonderful confirmation of one of the most beautiful theories that’s ever come out of physics.”

Left: To capture the first-ever image of a black hole, a team of international scientists travel to extreme altitudes in Northern Chile’s Atacama desert, home to the world’s best view of the night sky.