It’s not easy to sever a human spine. Here’s why

Baltimore City’s State Attorney Marilyn Mosby at a press conference today said that Freddie Gray “suffered a severe and critical neck injury” as a result of being handcuffed, shackled and unsecured inside a police van.

In detailing the events, she said Gray was handcuffed against the ground, arrested and then placed on his stomach in the van. He was never buckled into a safety belt and his repeated requests for medical attention were denied, despite several stops. By the time he reached Central Booking, he was in cardiac arrest and no longer breathing.

The injuries sustained to his spine during the trip led to his death, Mosby said. The question is how. Fatally damaging a spine isn’t easy, and experts say if a cataclysmic blow did occur in the van, then it probably wasn’t done by intentionally banging his head.

“If you’re talking about somebody with a normal spine, then you’d need tremendous willpower,” says Columbia University neurosurgeon Marc Otten.

The spine consists of 33 vertebrae bones that run like tightly-stacked rungs of a ladder from the base of the skull down to the tailbone. Between each bone is thin disc of spongy cartilage that provides flexibility. The spinal column is encased in muscle for support. 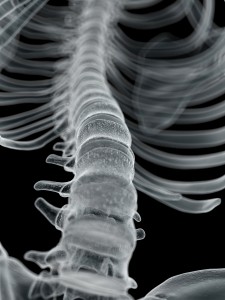 Illustration of a human spine. Image by Science Photo Library and Getty Images

“Picture that you’re playing a trust fall game at a work retreat. Before you fall backwards, your muscles instinctively tense up to protect your head and neck,” Otten said. The same thing happens when a soccer player heads a ball. Their muscles flex to protect the bones in the neck’s spine, known as the cervical vertebrae.

Only a handful of scenarios can overcome these self-supportive instincts. When a collision is unexpected, for example, and the head wrenches or hits an object with a tremendous amount of force, such as during a high-speed motor vehicle accident. To result in a severe injury, the sudden jerking would need to twist or extend the seven cervical vertebrae to a point where they misalign.

“That can cause a scissoring effect among the spinal cord,” Otten said.

For death to occur, the individual discs would need to crisscross and damage the phrenic nerve, which runs from the neck to the diaphragm — the primary muscle involved in breathing. The nerve controls the tempo of the diaphragm as it billows the lungs, meaning that its destruction can lead to respiratory failure.

Another [possible] cause of fatality is “spinal shock,” Johns Hopkins University School of Medicine neurosurgeon Ali Bydon said, wherein a spinal injury impairs the nerves that control blood pressure and heart rate. “This leads to inability to oxygenate key organs and subsequent death.”

The scissoring effect mentioned earlier could also cause compression of the two arteries that run from the heart through the neck’s spine and to the brain. Jamming those blood flows could cause a stroke, Otten said.

It is hard to quantify how much force it would take to break a human spine, Bydon said. But studies have shown, he added, that it would require a force greater than 3,000 newtons to fracture the cervical spine. That’s equal to the impact created by a 500-pound car crashing into a wall at 30 miles per hour.

“I’ve heard of spinal injuries from when people were handcuffed and thrown to the ground. The problem is they can’t brace themselves,” Otten said. In February, a 57-year-old man in Alabama was left partially paralyzed after officers slammed him into the ground during an arrest.