Telling a lie makes way for the brain to keep lying

As the U.S. presidential campaign has highlighted, the more a person lies, the easier it seems to become. But politics is not the only realm where dishonesty abounds. In 1996 Bernard Bradstreet, co-chief executive of the technology company Kurzweil Applied Intelligence was sentenced to jail for fraud. His initial transgressions were relatively minor: To boost quarterly accounts he allowed sales that had not quite been closed to go on the books. But before long customers’ signatures were being forged, documents altered and millions of dollars in fake sales reported—allowing the company to show profits when it was losing money while investors paid millions for company stocks. Similar tales emerged after the Enron scandal, one of the largest bankruptcy cases in U.S. history.

Anecdotal reports of dishonesty escalating over time are common, so a team of researchers from University College London (U.C.L.) and Duke University decided to investigate.

The team’s findings, published today in Nature Neuroscience, confirm in a laboratory setting that dishonesty grows with repetition. The researchers also used brain imaging to reveal a neural mechanism that may help explain why.

“We suspected there might be a basic biological principle of how our brain works that contributes to this phenomenon, called emotional adaptation,” Sharot said.

In the study the researchers recruited 80 adults to participate in a task that involved estimating and advising a partner about the amount of money in a glass jar of pennies, which contained between £15 and £35 (around $18 to $43). The participants saw large, high-resolution images of the jars for three seconds and were told their partner (played by an actor) would see a smaller picture of the jar for one second.

This study is the first empirical evidence that dishonest behavior escalates when it’s repeated, when all else is held constant.

The team found that dishonesty increased over 60 presentations of the jar, but only when it was self-serving. Participants still lied when only their partner benefited but this dishonesty remained constant. When both parties benefited, participants lied more, suggesting they found this kind of dishonesty more acceptable.

“People lie most when it’s good for them and the other person,” Sharot said. “When it’s only good for them but hurts someone else, they lie less.” 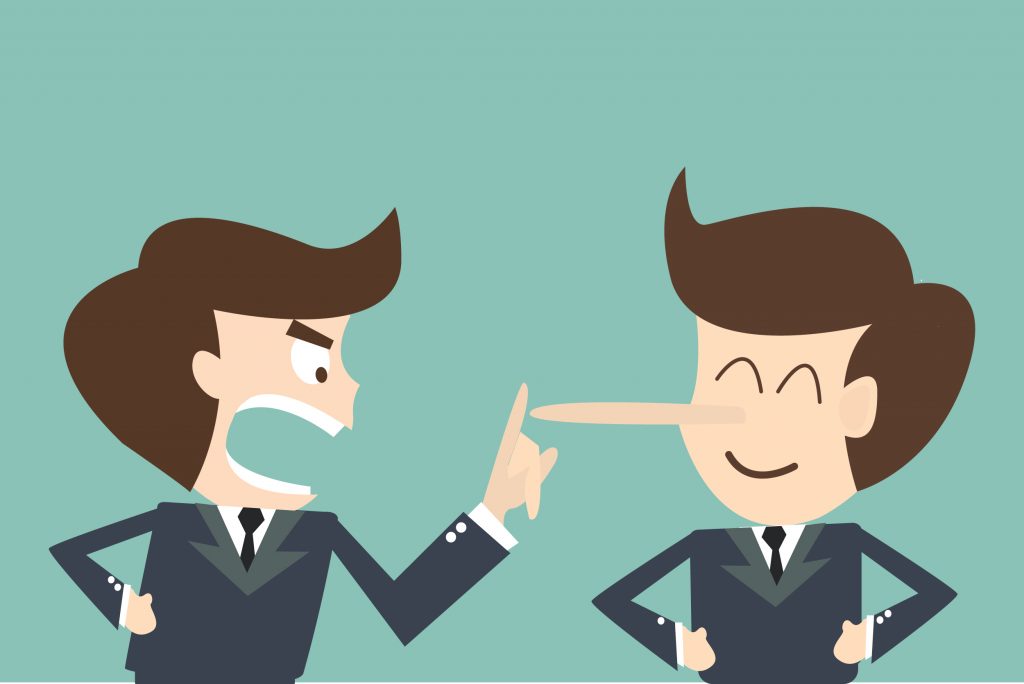 Larger reductions in activity in the amygdala, a brain region known to respond to and process emotion, predicted bigger subsequent lies. Photo by kittitee550/via Adobe

But lies only increased over time when the participant benefited, suggesting self-interest was necessary for dishonesty to escalate.

This study is the first empirical evidence that dishonest behavior escalates when it’s repeated, when all else is held constant, lead author Neil Garrett, a cognitive neuroscientist at U.C.L., told reporters.

Twenty-five of the participants conducted the task in a functional MRI scanner, allowing the researchers to measure brain activity. They focused on areas of the brain previously found to respond to emotional stimulation, identified using a large database of brain-imaging results.

This consisted primarily of the amygdala, a brain region known to respond to and process emotion. Activity in this area was initially high when participants lied, but declined over time during subsequent acts of dishonesty.

Importantly, larger reductions in activity predicted bigger subsequent lies. This suggests a biological mechanism that might underlie escalating dishonesty. A phenomenon called adaptation causes neural responses to repeated stimuli to decline. For instance, in the case of emotion amygdala activation in response to unpleasant images declines with repetition. A similar process may be operating here.

“The first time you cheat, say on your taxes, you feel bad about it. But that’s good, it curbs your dishonesty,” Sharot explained. “Next time you cheat, you’ve already adapted. There’s less of a negative reaction to hold you back—and you might lie more.”

Some researchers say the neural findings need to be confirmed by other studies, however.

“It’s an intriguing possibility that adaptation of amygdala response might underlie escalation in self-serving dishonesty,” says neuroscientist Tom Johnstone of the University of Reading, who was not involved in the research, “though the results need to be replicated in a larger sample of participants, in order to examine the involvement of the many other brain regions previously shown to play a role in generating and regulating emotional responses.”

Sharot’s team speculates the findings might be relevant for other kinds of behavior. “This same mechanism may well underlie other sorts of escalations, such as escalation of risk-taking or violent behavior,” Garret said, adding that the study “highlights the potential dangers of engaging in small acts of dishonesty on a regular basis.”

This article is reproduced with permission from Scientific American. It was first published on Oct. 24, 2016. Find the original story here.

Left: Anecdotal reports of dishonesty escalating over time are common, so a team of researchers from University College London and Duke University decided to investigate. Photo by Bits and Splits/via Adobe