Thar she grows! How whales got so big

Why are whales so gargantuan? Their modern-day massive size could be a direct result of climate change, evolutionary biologists suggest in a new study this week.

Researchers behind the study, published Tuesday in Proceedings of the Royal Society, studied whale size over time by sifting through the Smithsonian’s collection of 10,000 marine mammal fossils. Focusing on the baleen whale, the researchers built computer simulations that determined their size, comparing 63 fossilized skulls from ancient times — each one corresponding to a different species — to 13 modern varieties of whale. Using this data, the scientists created a family tree that spanned more than 30 million years.

The fossil samples showed that before 3 million years ago, whales very rarely grew over 30 feet in length. As the millenia went on, smaller baleen whales became very rare, until eventually, there weren’t any left. Today, only the giants among them exist.

University of Chicago biologist Graham Slater, who co-authored the study, said the fossils indicate the whale’s humongous size was a direct result of climate change — namely a cooling trend in oceans that began approximately 4.5 million years ago around the start of the Pleistocene era.

“We might imagine that whales just gradually got bigger over time, as if by chance, and perhaps that could explain how these whales became so massive,” Slater said in a statement. “But our analyses show that this idea doesn’t hold up—the only way that you can explain baleen whales becoming the giants they are today is if something changed in the recent past.” 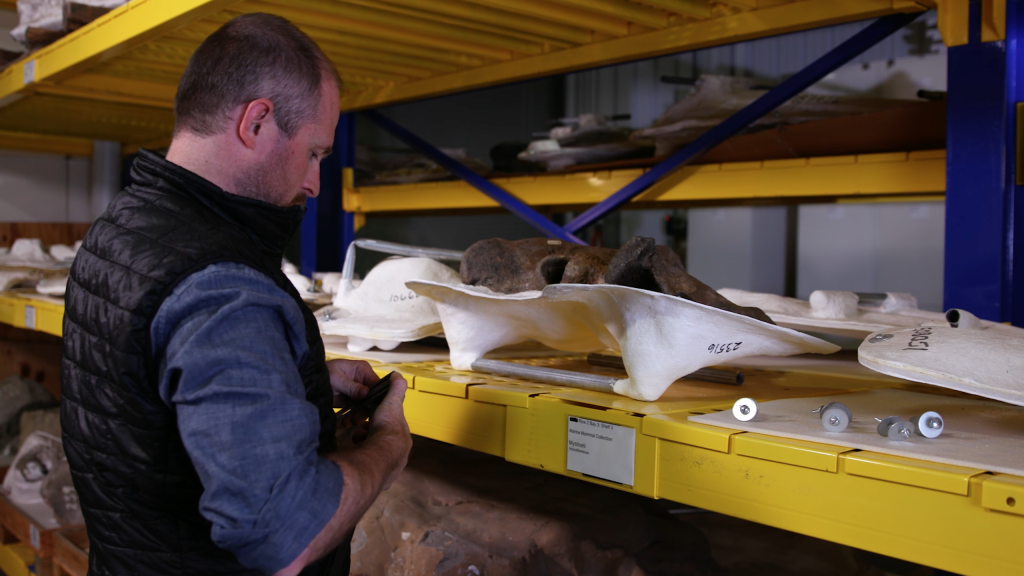 “We live in a time of giants,” said Jeremy Goldbogen, a co-author and marine biologist from Stanford University said in a statement. “Baleen whales have never been this big, ever.”

The dropping ocean temperatures changed the baleen whale’s ecosystem during the first ice age — approximately 4.5 million years ago, Slater and his co-authors say in the study. Baleen whales are filter feeders, with long hairs on the roof of their mouths that allow in food but keep out water. Before the ice age, the small crustaceans and microscopic plankton eaten by baleen whales swam throughout all the Earth’s oceans. The researchers theorize that after temperatures dropped and sheets of ice stretched over the oceans, the whale’s tiny prey became isolated and grouped together. The theory goes that by becoming bigger, the whales could gather up more food in single sittings.

The findings link two schools of thought about ancient whale growth and food availability, said Richard Norris, an oceanographer at the Scripps Institution in San Diego who was not involved in the study. One states that whales grew in size so they can travel farther between meals. The other hypothesis ties whales’ large body size to the increased appearance of dense patches of food, meaning the whales could chow on larger meals at once and eat more efficiently. 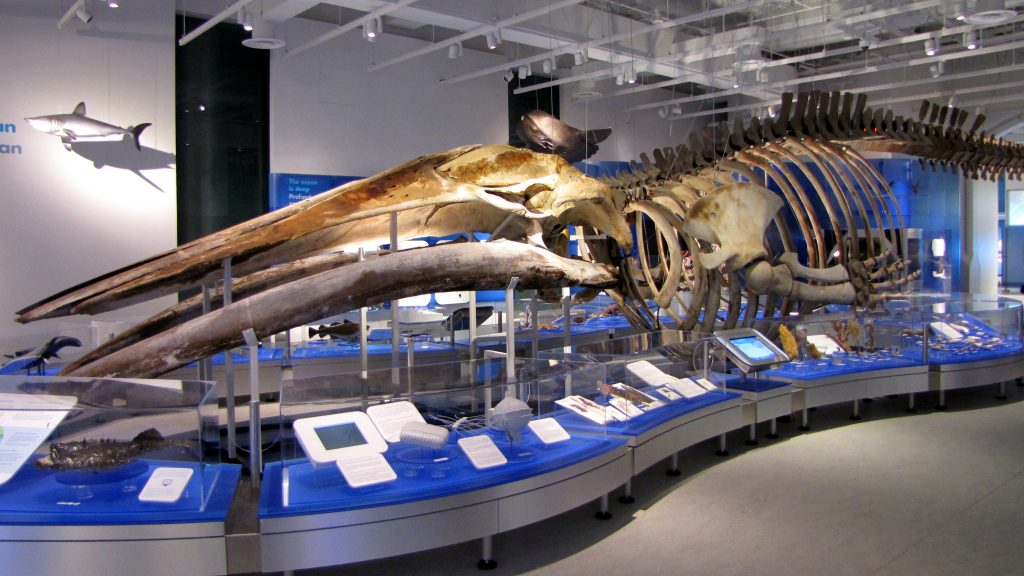 A full skeleton of a blue whale at the Canadian Museum of Nature. Photo by D. Gordon E Robinson

The study is a springboard for more whale research, Norris said. “One thing that I’d like to see in the future is some more detail, but for a lot of modern whales, we don’t have a lot of fossils. There’s almost no fossil record of orcas.”

As climate change continues to affect both local and global ecosystems, marine biologists are curious as to what these shifts might mean for colossal mammals.

As oceans continue to warm, Slater isn’t optimistic about large whales’ odds of survival. He indicated that when a species evolves to be as massive as baleen whales, it leaves them incredibly vulnerable to the slightest changes in their environment. Whales evolved to fit an ecology that is rapidly disappearing, and if they don’t adapt, they may disappear along with it, he said.

“We’re reducing the amount of cold water in the oceans, and that will reduce the abundance of prey that large baleen whales feed on,” Slater said. “The best case for baleen whales is to evolve to smaller sizes, but we know from studying other lineages in the fossil record that tends not to happen.”

Left: A blue whale,the largest vertebrate animal ever in the history of life, engulfs krill off the coast of California. Photo By Silverback Films/BBC/via Smithsonian