Color scientists already have a word for it: Dressgate. No surprise to those of us whose minds were collectively blown by the dress that’s blue and black to some, and white and gold to others (though frankly kind of ugly in any color.)

More surprising is the power it holds. It raises, on the one hand, some fascinating scientific questions: What is this thing called color? And how in the world can two people see one color so differently? (We’ll get back to that.)

But there’s a third, more philosophical, question at play here: Why are people so fascinated by this dress? And what caused it to spin so virally out of control?

Beau Lotto, professor of neuroscience at University College London, thinks he knows the answer. We inherently think we see the world objectively, as it really is, he said. The photo of this dress reveals the fallacy of that kind of thinking. It makes us question how we see, not just the dress, but everything.

He calls it “seeing yourself see.” Say you see the dress as white and gold — like me — but you know that somebody else, Taylor Swift, for example, perceives it as blue and black.

At that moment, the brain is doing something remarkable, Lotto said. “It’s entertaining two realities that are mutually exclusive. It’s seeing one reality, but knowing there’s another reality. So you’re becoming an observer of yourself. You’re having tremendous insight into what it is to be human. And that’s the basis of imagination.”

But back to color.

Color is, quite literally, a figment of your imagination, Lotto said. It only exists in your head. Bevil Conway, a neuroscientist who studies color and vision at Wellesley College, explained it this way: “Color is this computation that our brains make that enables us to extract meaning from the world.”

Of course, if you want to get technical about it, there are receptors called cones in our eyes that act like little color channel sensors. One cone processes blue, another processes red, another green. An elaborate network of sophisticated cells in the brain compares the activity of these cones, and then signals from our brain produce the impression of colors. This system is working furiously, all the time.

“For me, the amazing thing about it is, we have all this circuitry that does all this stuff, and we’re not aware of any of it,” Conway said.

But there’s something else. How we see an object has everything to do with how that object is illuminated. Our brains have adapted to see white as white whether it’s under harsh fluorescent light or soft daylight, blue light or yellow light. That’s called color constancy, said Anya Hurlbert, professor of visual neuroscience at Newcastle University. It’s something that Monet played with all the time, painting the color of haystack shadows blue, for example, to compensate for the light that was illuminating them.

“Most don’t see that blue,” Conway said. “They discount it.” Most people perceive it as black.

Then, as we look at an object, our brain automatically gets rid of the blue and orange to make room for the new color, Conway said.

Normally, our brains are adept at compensating for this changing light.

But enter the dress.

It’s difficult to tell what color is illuminating the dress, which may be what’s making our systems go haywire when we look at it. 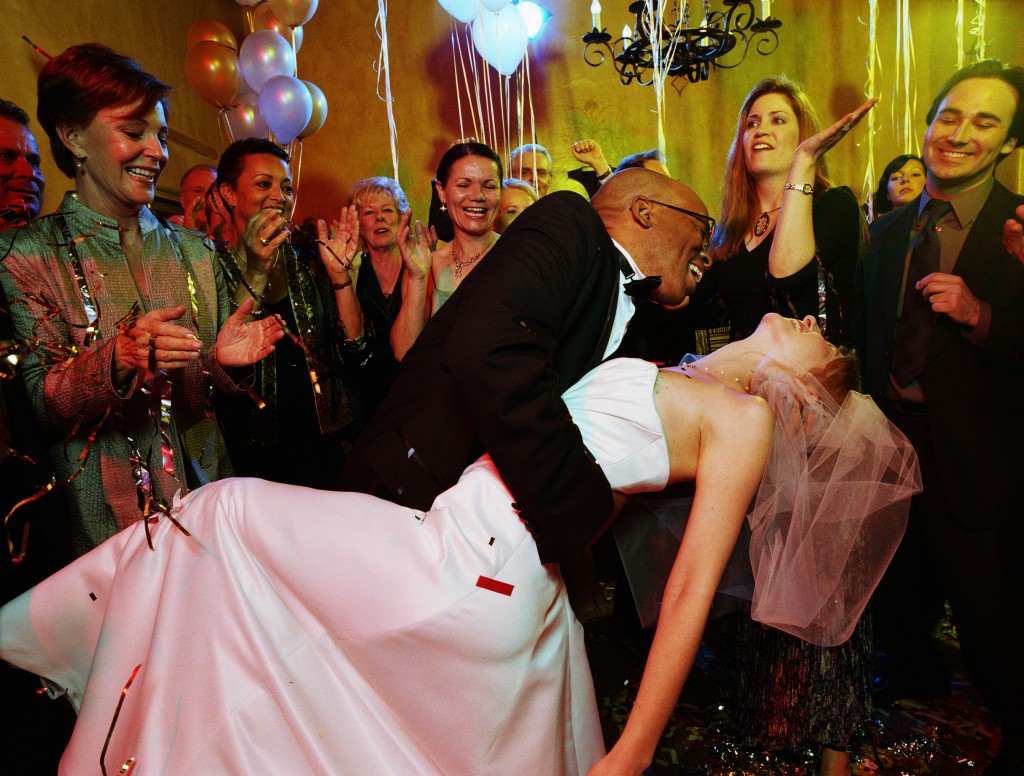 Our brain tells us the dress is white even though it actually appears pink. But because we can see that the entire room is shaded by hues of pink light, our brains are adept at compensating for this changing light. Photo by Getty Images

The room, Hurlbert said, is under one light, a yellow light, but the dress is in a shadow. Since the dress is not being illuminated by that yellow light, it appears blue-ish. Some brains compensate for the changes in light — other brains don’t.

This dress, Lotto said, “seems to be sitting at a stage where it’s bistable. It is, by definition, ambiguous. It could be spinning one way, but it’s almost, just as likely, spinning the other way as well.”

If you turn your computer monitor down, you might see it more as a dark grey and blue, if you turn your monitor up, it looks more gold and white. If you tilt your phone, you’ll again see it differently, because you’re changing the amount of contrast.

Color is perception, and this picture drives that home. It makes us consider something altogether nonintuitive: that there’s no such thing as white or gold or blue or black.

Left: Scottish musician Caitlin McNeill and her band have been arguing over the color of this dress: is it blue and black or white and gold? Image courtesy Tumblr/swiked