Americans gave up 74 million hours of Thanksgiving in 2016 due to partisan strife. That’s according to a study published Thursday in Science Magazine that tracked the movements of 10 million smartphone owners.

The study found that when Americans spent Thanksgiving at the homes of people who support an opposing political party, they cut short their visits by 30 to 50 minutes. Thanksgiving-goers departed even faster if they had been exposed to a high volume of political ads in 2016.

These trends apply to both Democrats and Republicans and parallel the growing partisanship seen among Americans in recent years.

But social psychologists looking into this behavior — known as selective exposure — said this study and other emerging work in this field offer clues on how to mend the divides and save your holidays.

How to find people’s homes from anonymized data

If you’re wondering how the scientists discovered where millions of people live, where they spent Thanksgiving and their political affiliations, then you should look no further than SafeGraph, a tech company based in San Francisco.

Our smartphones keep tabs on our locations and, when we grant permission, share this data with the device’s applications, such as weather apps or driving apps.

“Verizon has always known where you are. Google knows where you are if you use an Android phone,” said Keith Chen, an economist at the UCLA Anderson School of Management who co-led the study. “What SafeGraph does is they work with application partners who have asked permission to know your location, even when the app is backgrounded.”

SafeGraph has siphoned the location data provided to third party apps for more than 10 million smartphones in the U.S. This database details a smartphone’s location at any given moment in time, though it doesn’t identify the owner, at least in theory.

By downloading where these smartphones were located between the hours of 1 a.m. to 4 a.m., Chen and his research partner — Ryne Rohla of Washington State University — could infer where people in this database lived. To be safe, they tracked these locations over the three weeks leading up to Thanksgiving and made sure the readings were consistent.

Doing so identified 6.3 million probable homes. Repeating this computational trick for the hours of 1 p.m. to 5 p.m. on Thanksgiving revealed the places where people most likely spent their festivities. 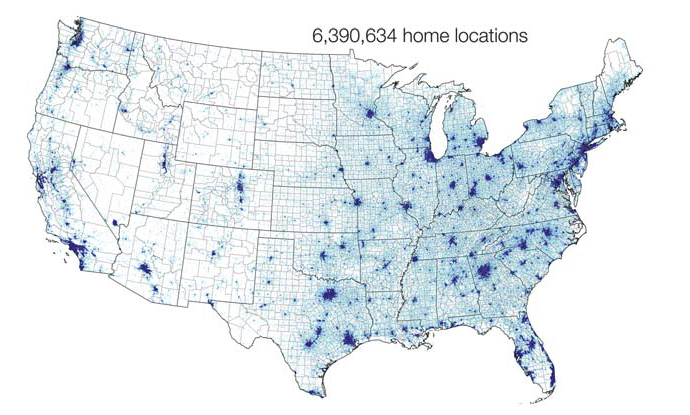 The study identified more than 6.3 million probable homes, representing 77 percent of all the smartphones in the U.S. Map by Chen and Rohla, Science Magazine, 2018

To derive political leanings of individual households, the team linked these home locations to precinct voting records, then made a big assumption.

Because precincts are extremely polarized, even more so than counties, we have a pretty good guess of whom these homes and families voted for, Chen said. This assumption rang true when the team compared their guesses on how homes voted against actual vote shares in 2016 for each state and Washington, D.C.

Their predictions surpassed their expectations, matching the actual distribution of American electorate to within 1 percentage point in 33 states and within 5 percentage points in all states.

Political ads made it worse

With these political leanings in hand, the team looked at how people from Democratic-leaning homes behaved when they visited a Republican household for Thanksgiving and vice versa. Chen and Rohla conducted this analysis for Thanksgiving in 2015 and 2016 to see how behaviors differed before and after the election.

Thanksgiving dinners are shortened by around 2.6 min on average for every 1,000 political advertisements aired in the traveler’s home media market.

This selective exposure — the tendency to avoid people who have different views — increased dramatically if folks hailed from a voting precinct exposed to tons of political ads.

“Most of us don’t experience this, but if you live in a media market in a swing state like Florida, then you saw more than 20,000 political ads over the course of the 2016 election campaign,” Chen said

Humans like to avoid contrary opinions because this information “just feels yucky,” said Jeremy Frimer, a social psychologist at the University of Winnipeg in Canada.

Last year, Frimer co-led a study on 2,400 liberals and conservatives to gauge their level of interest in hearing opposing views. The investigation found 60 to 65 percent of participants would pay money to avoid reading opposing opinions on gay marriage, and they carried similar aversions on gun rights, legalizing marijuana, climate change and abortions. 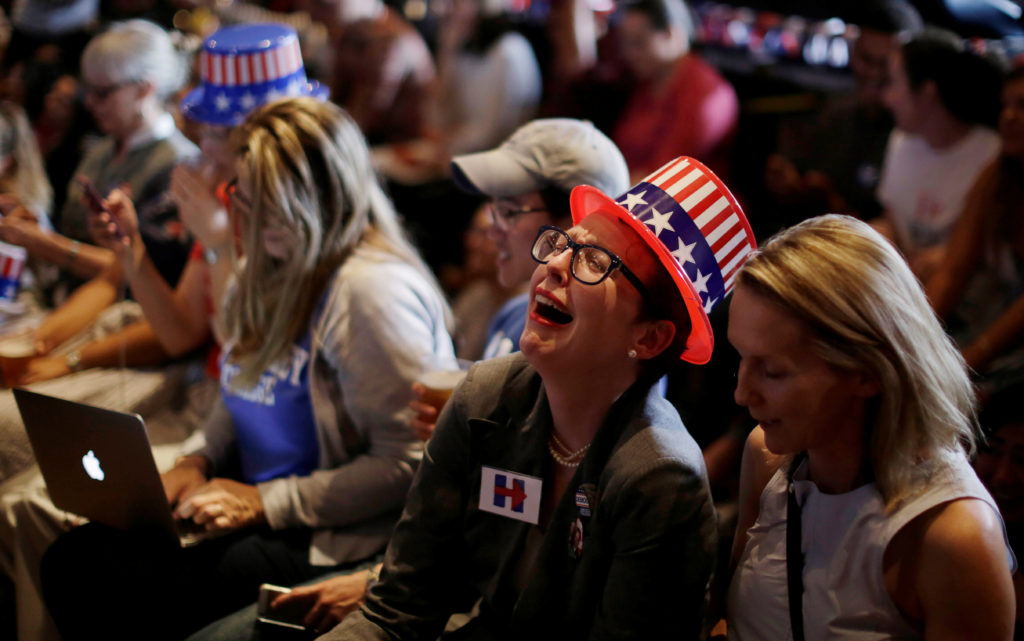 “Some previous studies found that conservatives tended to be more fearful of liberal ideas. But when we looked at those studies, we found their methods to be inconclusive,” Frimer said. “Our results suggest liberals and conservatives both strongly do not want to hear from the other side, and equally so. We find no difference between their motivation.”

The reason why people despise hearing from the other side is hard to pinpoint, but Frimer said one psychological theory posits that, akin to hunger and sleep, humans may have a biological need to share their reality with others. Our morals, especially political ones, form a core part of these realities.

“We like the sense that we belong in a kind of a moral community with others who share our views,” Frimer said. “Part of satisfying that need is communicating. You can’t just hold the same beliefs. You have to actually talk about them.”

These moral divisions can breed measurable feelings of anxiety, said Melanie Green, a social psychologist and communication researcher at the University of Buffalo in New York.

“With people you don’t know well, these conflicts can feel threatening because it’s unclear when you’ll step on a landmine,” Green said. But it’s also stressful with your friends because we want our loved ones to share the same positions as us. Humans want to be tribal.

She said the 2016 election season may have stood out because both campaigns focused so much on the individual characters of the candidates.

While both Frimer and Green were impressed by Chen’s study, they raised the question of whether such data scooping methods represented a violation of people’s personal privacy. Chen argues SafeGraph democratizes this data, which otherwise would be owned solely by private companies.

“There’s a broader question, that ties into Cambridge Analytica, about how much commercialization of personal data people feel comfortable with,” Frimer said. “Personally, I feel uncomfortable about that level of surveillance. I think it’s up to the public to decide whether they are OK with the knowledge that their cell phones are being monitored and the data from that is being sold.”

To save Thanksgiving, Green and Frimer recommend that everyone should step back and see the opponent as a whole person rather than fixating on single opinions.

Both approaches will increase your likelihood of making it to the pumpkin pie.

Left: Americans gave up 74 million hours of Thanksgiving in 2016 due to partisan strife, according to a study published Thursday in Science Magazine. Photo by Louish Pixel/via Flickr/via CC BY-NC-ND 2.0