The Arctic is experiencing its ‘most unprecedented transition in history.’ Here’s why

Washington D.C. — Few places will feel the plight of climate change as hard as the Arctic. Our upper pole is warming faster than any other region on Earth, a trend that may be tied to erratic weather patterns across the northern hemisphere.

Those are two takeaways from the 2018 Arctic Report Card, which was released Tuesday at the American Geophysical Union conference in Washington, D.C. The 13th year of this peer-reviewed report card features 14 essays by 81 scientists from 12 countries.

For first time, the report card includes a warning about red tide and harmful algal blooms, which are expanding due to a lack of ice and warming ocean temperatures. Toxins from these microorganisms are threatening marine wildlife and coastal fisheries, imperilling communities that depend on these species.

This year will also enter the record books as the second warmest for the Arctic since 1900.

This year will also enter the record books as the second warmest for the Arctic since 1900, said Emily Osborne of the NOAA Arctic Research Program.

“The only warmer year occured in 2016,” Obsorne said, adding that Arctic air temperatures for the past five years have exceeded all records since the beginning of 20th century. “The Arctic is experiencing the most unprecedented transition in history.”

Here are four things you need to know about the Arctic Report Card.

When you hear about harmful algal blooms, the mind typically wanders to Florida, where thick scums of blue-green algae and clouds of red tide have floated in the state’s warm waters for more than a year.

Due to a warming Arctic Ocean, at least five families of these harmful microorganisms are now present in other northern waters, like Chukchi Sea and Bering Sea.

“The vast majority of the Arctic ocean has experienced clear long term trends of warming,” said Karen E. Frey, a geographer and biogeochemist at Clark University in Worcester, Massachusetts. Microscopic creatures are thriving in these waters. Near St. Lawrence Island, for instance, west of the Alaska mainland, aquatic biomass in 2018 increased between 275 and 500 percent relative to the average over the last 14 years.

These harmful algal blooms produce a range of toxins, which can poison other plankton, fish, shellfish, birds and humans. One study of stranded marine mammals — like whales and seals — found the algal toxin domoic acid in all species tested.

This explosion in tiny creatures has been paralleled by the rapid rise of microplastics in the Arctic Ocean. The Arctic Basin contains more microplastic than all other ocean basins in the world, according to a study published in June and cited in the report card, with the highest concentrations stuck in the Beaufort Sea. 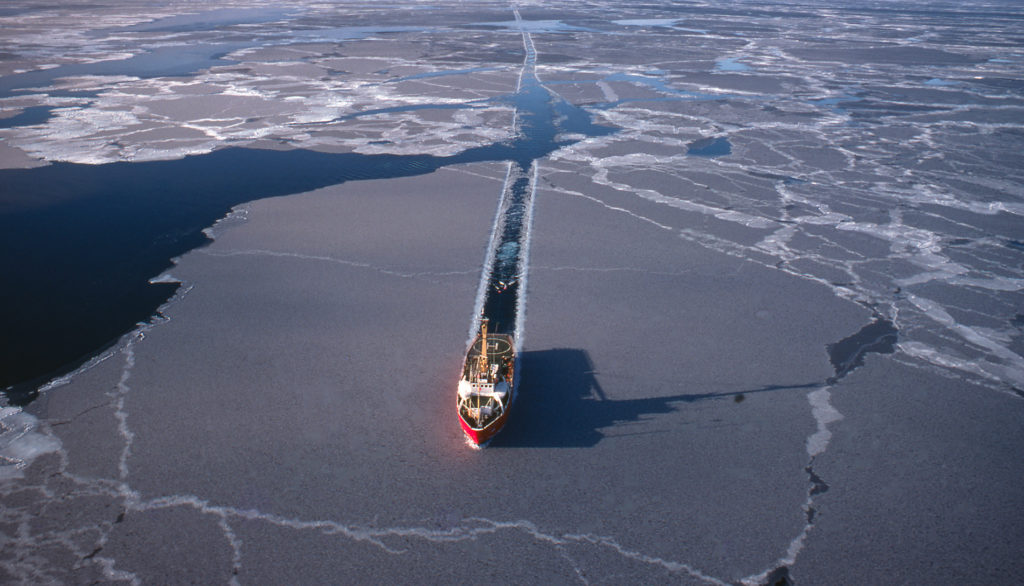 Arctic shipping may be contributing to a rapid increase in microplastics. Photo by westphalia/via Getty Images

These microplastics have made multiple intrusions into the food web, being found in everything from polar cod and seafloor-hugging invertebrates to Arctic birds. The plastic waste has also been found buried in sea ice, which scientists are using to study its abundance.

The major sources of these microplastics remain unclear. They could be floating to the Arctic from other oceans, but some contribution is due to waste — fishing nets and other gear — from shipping activities, which have increased substantially since 2009.

The greening of the Arctic continues to gradually grow. Vegetation has expanded overall in the Arctic for the last 36 years, according to the new report card. As shrubs and grasses expand, some species of birds and mammals are thriving. Caribou and wild reindeer, both herbivores, are not part of this lucky class.

Arctic caribou in North America and Greenland and reindeer in Russia and Norway have declined 56 percent over the last two decades, with their populations dropping from 4.7 million to 2.1 million. Why? 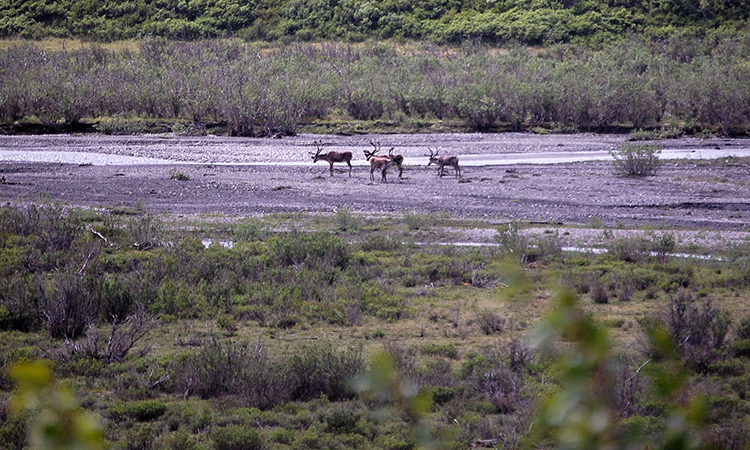 Arctic caribou and wild reindeer populations dropped sharply from 4.7 million to 2.1 million grazing animals in two decades, with the largest declines in Alaska and Canada. Scientists attribute the declines to Arctic warming, which is increasing the frequency of drought, affecting the quality of forage. Longer, warmer summers also increase flies, parasites and disease outbreaks in the herds. Photo and caption by Rick Thoman/Univ. of Alaska-Fairbanks/NOAA

Increased drought and longer spans of hotter weather are causing outbreaks of infectious bacteria and parasites, said Howard Epstein, an ecologist at the University of Virginia. The caribou and reindeer populations are also declining to a boon in predators and because extreme weather events are occasionally triggering droughts

Wacky weather and the eviction of older ice

The Arctic pattern most pertinent to our daily lives, here in North America, revolves around warmth.

Warm air temperatures, which are increasing at twice the rate of the remaining world, continue to disrupt the polar jet stream, making it sluggish and unusually wavy. A surge of warm Arctic weather in 2017 coincided with severe winter storms in the eastern United States at the beginning of 2018 and a cold snap in Europe in March. Osborne said the jury is still out on the strength of the connection between Arctic warming and wacky weather in the mid-latitudes, but at the moment, the correlation is solid.

This atmospheric warming also drove declines in Arctic snow cover and caused melting of the Greenland ice sheet. But the biggest loser, in terms of frozen water, is Arctic sea ice. Older packs of Arctic sea ice, which used to be impervious to the annual melting cycle, are thinner and covering less area than it has in the past. The oldest ice has declined by 95 percent in the last 33 years.

“During two weeks in February, which is typically the height of ice growth, the Bering Sea lost a piece of ice the size of Idaho,” said Donald Perovich, a sea ice geophysicist at Dartmouth College in New Hampshire. March witnessed the second lowest sea ice extent in 39 years.

Perovich said this loss is being felt hardest by coastal communities, which used to be buffered by the sea ice. The loss is also exposing communities to massive storm surge and disappearing shorelines. It is also depriving coastal residents of a safe route for hunting and travel.

“In 2018, the effects of persistent Arctic warming continue to mount … pushing the Arctic into unchartered territory,” Obsorne added.

Left: The 2018 Arctic Report Card found the Arctic region had the second-lowest overall sea-ice coverage on record. The map shows the age of sea ice in the Arctic ice pack in March 1985 (left) and March 2018 (right). Ice that is less than a year old is darkest blue. Ice that has survived at least 4 full years is white. Maps and caption by NOAA Climate.gov/Mark Tschudi./University of Colorado/CCAR