The largest volcano on earth discovered beneath the Pacific Ocean 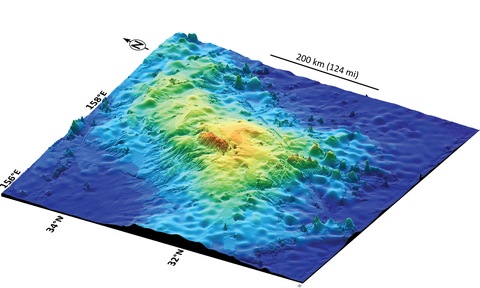 Covering an area the size of New Mexico, the underwater brobdingnagian Tamu Massif is by far the largest single volcano on earth — and rivals some of the giant volcanoes in our solar system.

Roughly 1,000 miles off the eastern coast of Japan, the Pacific Northwest is home to the giant Tamu Massif. Previously thought to be an area with lots of eruption points rather than just one, core samples and other evidence have confirmed that Tamu Massif erupted from a single, central source.

“We knew it was big, but we had no idea it was one large volcano,” wrote Will Sager of the University of Houston in the journal Nature Geoscience, outlining the discovery. “Its shape is different from any other submarine volcano found on Earth, and it’s very possible it can give us some clues about how massive volcanoes can form.”

Sager named it the volcano Tamu after the initials of Texas A&M University, where he previously taught. Massif is French for “massive” and refers to a section of the Earth’s crust that is demarcated by faults and flexures.

The largest active volcano on Earth is Hawaii’s Mauna Loa. But at 2,000 square miles, it’s just a comparative speck — less than 2 percent the size of Tamu Massif.

A more worthy fellow volcano is Olympus Mons, the Mars goliath that backyard astronomers can see on a clear night. Mars’ largest volcano, Olympus Mons is only about 25 percent larger by volume than Tamu Massif.

Tamu Massif is believed to be about 145 million years old, and became inactive a few million years after it was formed according to Sci-News.com.