The not-so-hidden physics of your favorite Olympic event

No matter how high an Olympian jumps, how fast they run, how hard they kick a ball, their amazing feats are always governed by the laws of physics. Pushing the physical limitations of a sport, as the world’s best athletes do, isn’t about breaking those laws but knowing just how far to bend them to their competitive advantage.

“When I’m watching a sporting event, I can’t help but look at it through the lens as a physicist — I’m watching the way the arms are moving, the twists and the turns,” said University of Lynchburg physicist Eric Goff.

But you don’t need a PhD to wrap your head around the basic rules that dictate sports, and well, everything. All you really need is a refresher on some of the basic principles you may have learned back in grade school science class.

Here’s a crash course on how to see those key laws in action.

How physics rules the Games 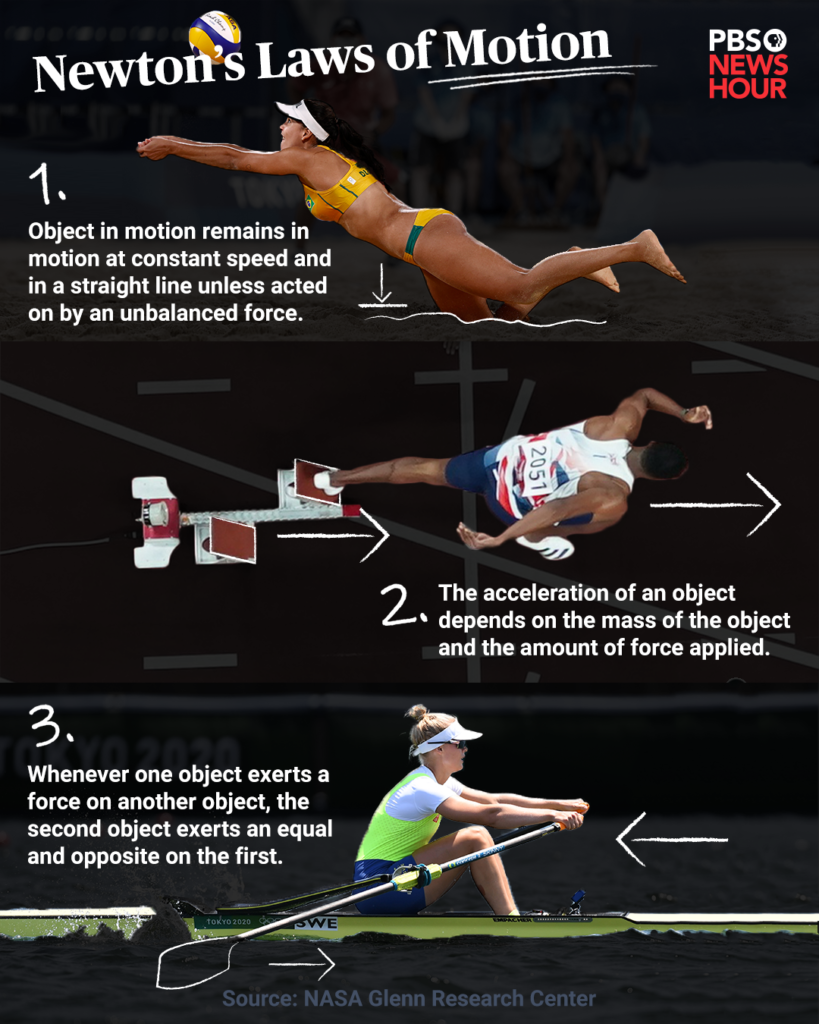 In the world of sports, there are plenty of examples that illustrate Newton’s first law — an object will stay either in motion or at rest until a force acts upon that object to change it. Jahred Adelman, associate professor of physics at Northern Illinois University, said. When a volleyball player dives for a ball, for instance, that player won’t stop moving until something else applies a force to stop them — in this case, the hard surface of the court.

When it comes to Newton’s second law, captured by the equation “force equals mass times acceleration,” look no further than the track. We know from his first law that in order for an object — like a person — to start moving, a net force must get it going. Net refers to the sum of all forces acting on an object, Adelman explained.

Sprinters at rest need a force to kick off their acceleration. They find that force not just with their own bodies but by pushing against starting blocks.

That’s why sprinters push off as hard as they can against the blocks, Adelman added, in an example of Newton’s third law — the greater that force is, the greater the opposite force enacted by the starting block will push them forward.

Newton’s third law turns up in rowing to illustrate how exactly boats travel forward. Rowers use as much force as possible through their oars to push the water. That water, in turn, pushes back on the boat with equal force, propelling the vessel forward.

With those basics in mind, let’s dive a little deeper into some signature moves. 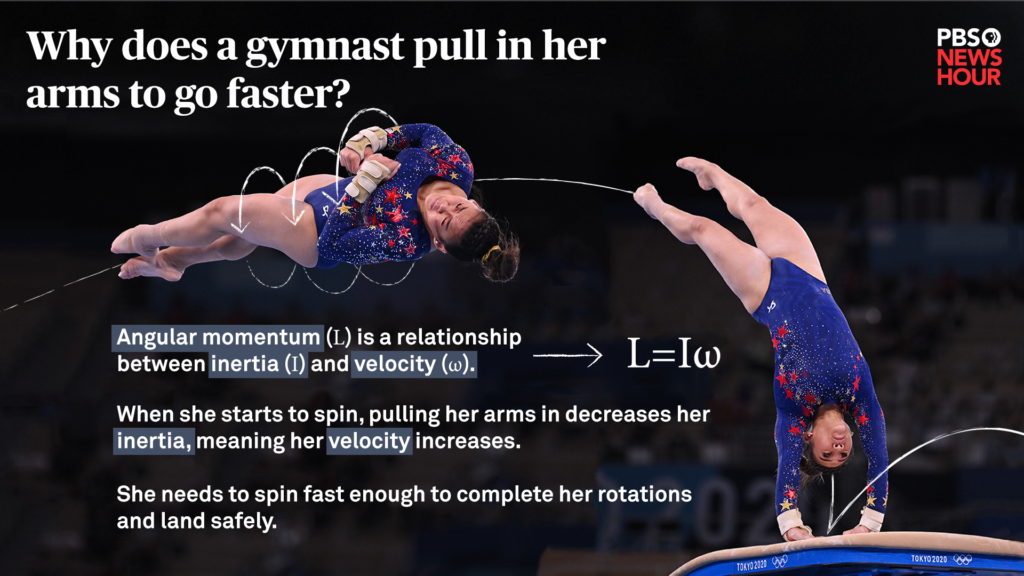 When you’re watching the world’s top gymnasts compete, keep an eye on their arms for an example of the law of conservation of angular momentum. The laws of physics stay the same even when an object changes angles, Adelman said.

When an athlete launches themselves into the air, their angular momentum will remain constant, or conserved. But if they move their bodies to change how their mass is distributed, they can manipulate the speed of their rotation.

“That’s why you will see [gymnasts] shift their arms in different directions — they put their arms out or put their arms close to their body — because that changes how their mass is distributed,” Adelman explained. “And then to conserve angular momentum, their body then has to rotate differently.”

Simply put: The farther a gymnast’s arms are from their body, the slower they’ll rotate. But when they bring their arms close to their core, they’ll rotate faster.

A faster spin allows gymnasts to pull off the complex series of twists involved in their routine in time to land safely on the ground. At the end of their performance, you’ll see their arms spread out. 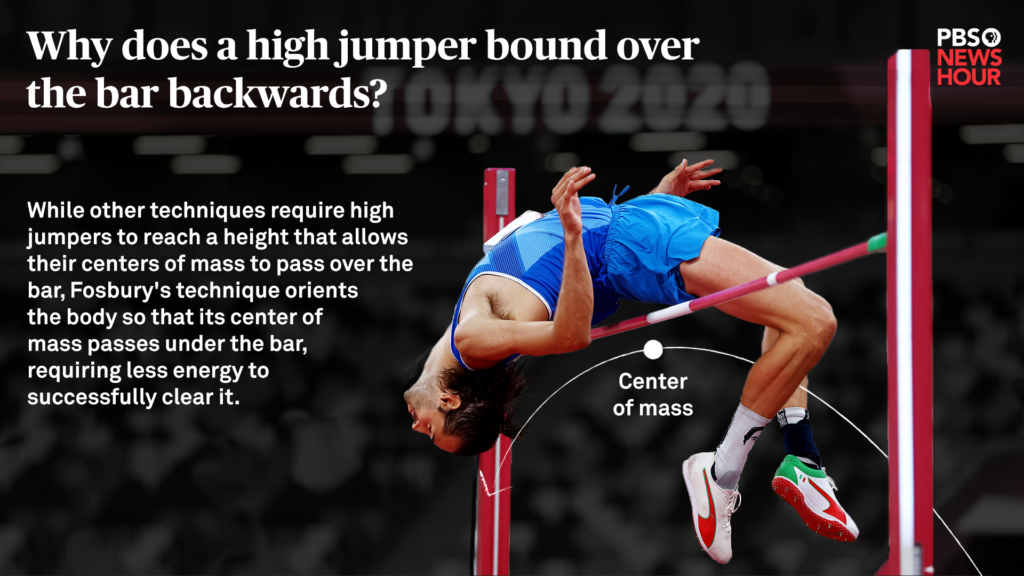 Rarely does an athlete debut an innovative move that completely changes how future generations approach the sport. But during the 1968 Summer Olympics, that’s exactly what high jumper Dick Fosbury did with his gold-winning “Fosbury Flop,” which helped him leap 7 feet and 4.25 inches and set an Olympic record.

In the high jump, the goal for athletes is to reach the highest height possible while jumping over a pole without knocking it over. 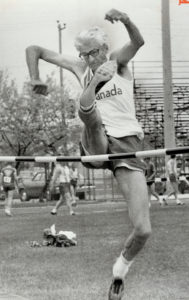 Prior to Fosbury, high jumpers would use techniques like the “scissor kick” that force their center of mass, or the average position of their body, to pass over the bar, which they faced head-on. They threw themselves over in something closer to an upright position.

Regardless of technique, the maximum height that a high jumper’s center of mass can reach is established as soon as they leap off the ground, Goff explained.

The tricky thing about that average position of an object is that it doesn’t have to be located on an object itself. The center of mass of a donut, for example, is the empty hole in the middle, Goff said. The pastry is wrapped around its center of mass.

The Fosbury Flop is sort of like bending your body into a donut shape in order to manipulate your own center of mass. By jumping head first and arching his body upward, Fosbury moved his center of mass under the bar and made his jump more efficient.

“The Fosbury Flop allows a jumper to clear a bar height that’s greater than the maximum height of the jumper’s center of mass, which was not possible with the scissor technique,” Goff said. 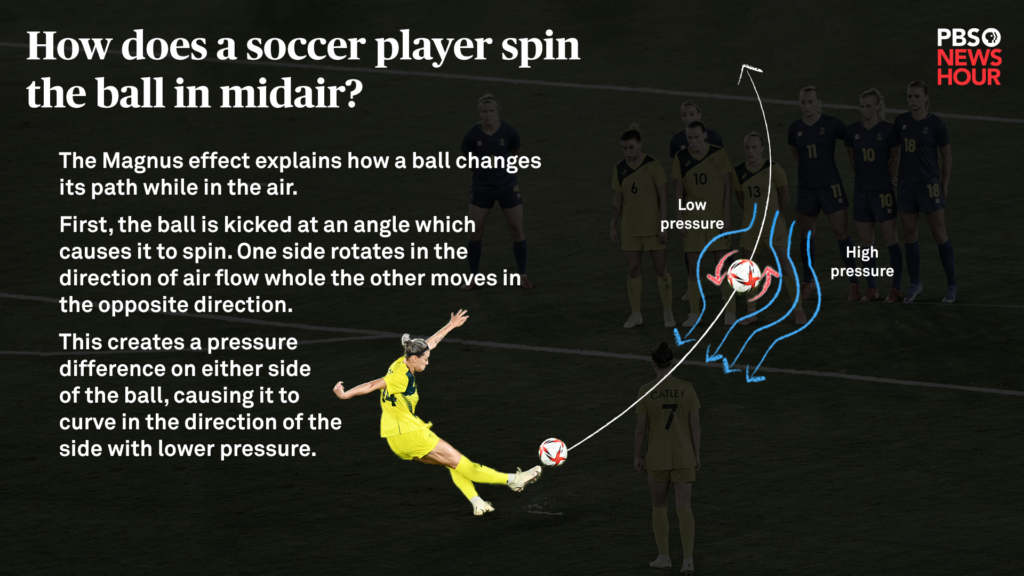 Have you ever watched a soccer player kick a ball that seems to magically change direction in the air, scoring a seemingly impossible goal?

That’s not magic — it’s the Magnus effect. Kicking the ball at a certain angle allows it to spin, which is crucial for setting up its trajectory to change as it’s moving in the air.

What is relative velocity?

“If you were a tiny, miniscule gnat sitting on one spot on a ball that isn’t spinning, it would appear that the ball is at rest and it is the air that is moving,” he added. “This is why when you are sitting in a car cruising down the highway it seems like you are at rest and the outside world is moving, and from outside the car the opposite is true.”

As that spinning soccer ball is traveling in one direction, some air is traveling in the same direction of the spin, and appears to have a velocity equal to the ball’s speed plus its spin speed, Adelman explained. On the other side, air is moving in the opposite direction, and its velocity appears to be equal to the ball’s speed minus its spin. The relative air speed, therefore, is larger on the side that’s spinning with the ball. Those differing speeds act as two different forces on each side of the ball.

Why does that difference matter? There’s a drag force between the ball and the air that depends on the relative air speed, Adelman said. The faster that speed, the more drag force there is. Newton’s second law indicates that when there is a non-zero force, the ball must accelerate in the direction of that force.

Goff offered the example of a right-footed kicker approaching a ball for a corner kick. If that player aims their foot to the right of the ball’s center, their kick can exert torque that creates “a counterclockwise rotation on the ball.”

As the ball flies through space, air whips off its back. In an example of Newton’s third law — which involves actions and equal and opposite reactions, if the ball pushes air to the right, that air must push it back to the left.

“In addition to a normal drag force on the ball, which acts opposite the ball’s velocity, the ball experiences a sideways force to the left [from the player’s perspective,]” Goff said. “That sideways force causes the ball to be deflected to the kicking player’s left.”

So the next time you see a soccer player make a ball swerve at the perfect moment, remember this phenomenon and all the ways the laws of physics can play to your advantage.

Left: Damian Warner of Canada in action on his way to winning gold. Photo by Aleksandra Szmigiel/Reuters