Beyond Suburbia: The Other Side of Vultures 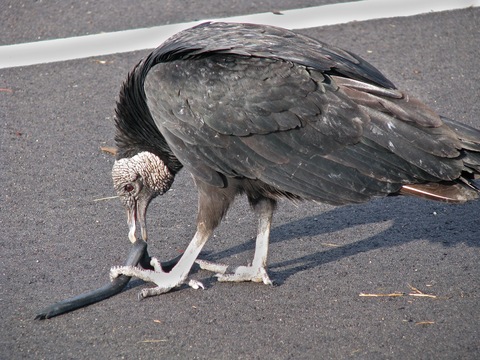 A black vulture chews on a rubber seal from a vehicle in Everglades National Park, Florida. Photo by Curtis Morgan/Miami Herald/MCT via Getty Images.

On Friday, I wrote about a colony of vultures that has occupied a suburban neighborhood in Virginia’s Loudon County, frustrating area homeowners. It’s no wonder residents want them out. They are noisy, they smell bad, they peck at roof sealant and windshield wipers, and their corrosive waste contaminates soil and kills trees.

As birds go, vultures fare poorly in popularity contests. The song “Fly Like a Vulture” never made it onto anybody’s mix tape. Charles Darwin in 1832 called them “disgusting birds with bald scarlet heads formed to revel in putridity.” And if you look up the word “vulture” in the Merriam-Webster dictionary, you’ll find a second definition: “a rapacious or predatory person.”

But there’s another side to the story. Vultures have keen eyesight, a powerful sense of smell and a magnificent wingspan. They glide over large swaths of land propelled by upward airstreams. And they have low pH levels in their gut, which allows them to destroy microscopic organisms and feed on bacteria-laden carcasses. It’s these qualities that make them such efficient food hunters and scavengers. In fact, it’s been estimated that vultures in the Serengeti eat more meat than all the other mammalian carnivores combined, according to this paper, which was published in the Annals of the New York Academy of Sciences in 2011.

Vultures are also the unsung heroes of disease prevention. Munir Virani, director of the Peregrine Fund’s Africa Programs and one of the paper’s authors, calls them natural garbage collectors.

“They clean up carcasses right to the bone,” he explains in the YouTube video below. “They help clean up all the bacteria. They help absorb anthrax that would otherwise spread and cause huge livestock losses.” And in areas with no vultures, he adds, carcasses take three times as long to decompose.

Vultures in India and Nepal have declined dramatically in the last decade, and 14 of the 23 vulture species worldwide are threatened with extinction. The main culprit is a veterinary drug called diclofenac found in the carcasses of livestock. The birds ingest the drug while scavenging carcasses, and it eats away at their kidneys, causing death or infertility.

In 2006, the governments of India, Pakistan and Nepal banned diclofenac, in response to the vulture decline. Since then, vulture numbers have started to stabilize somewhat, according to a report published in the journal PLOS One.

But in India, the vulture decline has had disturbing consequences, such as feral dogs feeding on carcasses. “And when you have feral dogs, you have a huge time bomb of rabies,” Virani says in the video, adding that the number of rabies cases in India has indeed increased dramatically.

The problem is detailed in the Annals of the New York Academy of Sciences paper, “Dropping dead: causes and consequences of vulture population declines worldwide.” Here’s an excerpt:

“Both feral dogs and rats are well-known disease reservoirs, and their increase at carcasses in the absence of vultures may increase rates of infectious disease transmission to other species. Diseases such as rabies and bubonic plague, for which dogs and rats respectively are the primary reservoirs, may increase as a consequence of vulture declines. Wildlife and livestock could also be at increased risk from dog- and rat-borne pathogens, including canine distemper virus, canine parvovirus, and Leptospira spp. bacteria. In India, rising cases of human anthrax due to handling infected carcasses or consuming poorly cooked meat of infected livestock are believed to be linked to the precipitous decline of vultures.”

Interestingly, Charles Darwin ultimately changed his mind about vultures, Virani said, after watching them “fly effortlessly without energy in the skies.”

If you thought Jaws was scary … imagine a piranha with the teeth of a T-rex. This ancient piranha relative had teeth with a force so fierce, they could sheer through tissue, pierce thick shells and crack armoring and bones, according to a new study published in the journal Scientific Reports.

This National Geographic video shows the sheer force of a piranha bite.