Are We All Martians? The Curious Hunt for Life on Mars 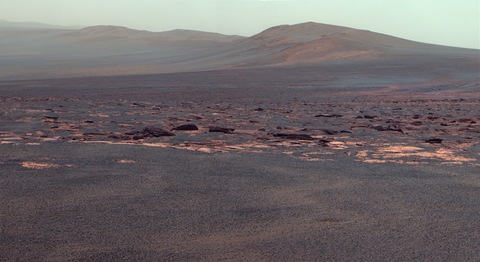 The prospect that Mars was once a cushy berth for life has waxed and waned as our abilities to study the planet have evolved.

In the 1870’s an Italian astronomer with the great, lyrical name of Giovanni Schiaparelli first spotted the signs there was water here — he called them canali — Italian for channels. But something got lost in the translation and a Boston Brahmin and amateur astronomer named Percival Lowell took that to mean canals — implying someone did some digging up there.

A prolific writer, by the turn of the century, Lowell had most everyone convinced drought stricken little green men built the canals for irrigation. The rest is science fiction history.

But in the ’60s and ’70s, we learned just how much fiction it was. The Mariner missions to Mars found no Martian infrastructure — or Martians for that matter.

And then in 1976, the Viking Landers successfully reached the surface of Mars, carrying mini science labs designed to test for signs of microscopic life. They found nothing but lifeless dirt.

In the mid-’90s, the Mars Life saga took yet another odd turn. The wildly successful Pathfinder mission got people’s Mars gears turning, and then came the rock that rocked the world of astrobiology. Well, actually it helped create it.

Allan Hills 84001 is one of the oldest Martian meteorites ever found on Earth. It is about 4.5 billion years old — the age of our solar system. They don’t get older than that.

In 1996, scientists at NASA’s Johnson Space Center in Houston stunned the world by suggesting that Allan Hills 84001 bears a tiny fossil — proof of ancient life on Mars. The media extravaganza was, well, out of this world.

You may wonder how they know a rock sitting on the ice is from Mars? Good question. Well, they compare gases trapped inside to Martian atmosphere samples measured by Viking.

Ralph Harvey is a professor of planetary minerals at Case University. He spends a lot of time looking for Mars meteors in Antarctica. He has not yet seen anything that says “life” to him:

“When we argue about signs of possible life on Mars it’s always the most subtle thing you can imagine,” he told me a few years ago. “Something at the very edge of measurability, and life did not proceed that way on earth. Life is in your face. Life is something we have to scrape off the rocks to get to the story of the rocks. And I don’t see that on Mars. I don’t have that sense about Mars. So life on Mars is going to have to get in my face for me to believe it.”

“Life is very tenacious stuff,” says Squyres, “and if life ever developed on Mars, it’s not a stretch at all to say that it could still be there. But it’s probably not going to be easy to find.”

The Mars Science Lab — Curiosity — is not designed to be a life detector. But if it arrives alive on Mars — and stumbles onto a fossil, we have a lot to consider about our place in the universe.

While the laws of physics make it a lot more likely for Mars meteors to land here on Earth, the two neighboring planets have been swapping rocks for billions of years. Could life have begun on Mars first and been transported here on a rock?

Maybe we are all Martians.

Miles O’Brien reports on Curiosity’s mission and upcoming landing on the NewsHour Friday.