The Science of Snowflakes, and Why No Two Are Alike

Peer through a magnifying glass at a snowflake, and you’ll see an ice creation more elaborate than anything Martha Stewart could cut from folded paper. So what’s behind the snowflake’s unique and elaborate shape?

The snowflakes that settle upon our sleeves and scarves during a snowstorm have more variations in shape than you might think. There’s the classic snowflake: a flat plate with branchlike, dendritic arms. Some look like hexagonal prisms; others like hollow pencil-shaped columns or tiny needles.

We tracked down two ice experts to help answer the question: Kenneth Libbrecht, a physics professor at the California Institute of Technology and avid snowflake photographer, and John Hallett, director of the Ice Physics Laboratory at the Desert Research Institute in Reno, Nev.

Scientists use the term “snow crystal” more than snowflake. According to Libbrecht’s website, snowcrystals.com: “A snow crystal, as the name implies, is a single crystal of ice. A snowflake is a more general term; it can mean an individual snow crystal, or a few snow crystals stuck together, or large agglomerations of snow crystals that form ‘puff-balls’ that float down from the clouds.”

A few facts about snow crystals: They are formed from water vapor that condenses directly into ice inside of clouds. They take shape as water vapor molecules from cloud droplets condense and freeze on the surface of a seed crystal, and patterns emerge as these crystals grow. The seed crystal itself forms on a tiny particle, like a speck of dust in the air, which serves as a base for ice growth.

“You can actually see these ice nuclei in all snowflakes,” Hallett said. “Not with the naked eye or a regular microscope, but put it in an electromagnetic microscope and you will see it.”

Note: Snowflakes are not created from frozen raindrops. Liquid water that freezes in the atmosphere as it falls to the ground is actually sleet. And hail, Libbrecht said, is just a large piece of sleet that collects water and grows as it travels from the atmosphere to the ground.

Water molecules — made of one oxygen and two hydrogen atoms each — are ultimately responsible for the familiar six-sided shape we associate with snowflakes.

“Atoms and molecules can hook up in different ways and, in the case of water, they like to hook up into a hexagonal lattice,” said Libbrecht, who studies the physics of crystal growth. “That underlying structure is how the crystal gets its sixfold symmetry.”

“[A snowflake’s] final shape is a history lesson of how the thing grew,” Hallett said. “The outside edge of the crystal is where it grew last, and as you go inward you can tell [the conditions of] where it was before.”

And temperature also plays a major role in the forming of flakes. This diagram shows how shapes vary according to temperature: 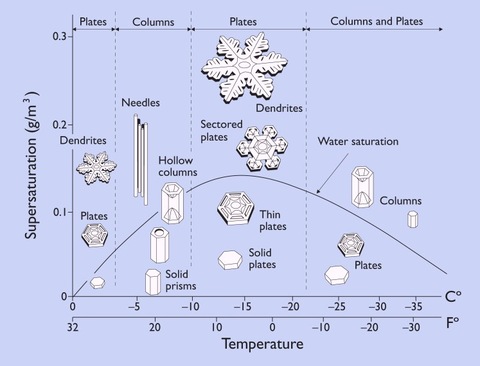 We see that thin plates and stars grow around -2 C (28 F), while columns and slender needles appear near -5 C (23 F). Plates and stars again form near -15 C (5 F), and a combination of plates and columns are made around -30 C (-22 F).
Furthermore, we see from the diagram that snow crystals tend to form simpler shapes when the humidity (supersaturation) is low, while more complex shapes at higher humidities. The most extreme shapes — long needles around -5C and large, thin plates around -15C — form when the humidity is especially high.

But the physics is far from exact, Libbrecht said.

“It’s a mystery as to why [snowflake shapes] go from plates to columns to plates to columns as the temperature lowers,” he said. “That’s one of the things I’ve been trying to understand. It has been a mystery for about 75 years, and it’s still unsolved.”

And though it may appear otherwise, the arms of a snowflake are not perfectly symmetrical.

“If you look at the dendritic arms of a snowflake carefully, they usually are a bit different,” Hallett said. “The atmosphere is a turbulent place, and crystals tend to oscillate as they are blown around, so even different corners see slightly different environments.”

So is it really true that no two snowflakes are alike?

“It’s like shuffling a deck and getting the exact same shuffle for 52 cards,” Libbrecht said. “You could shuffle every second for the entire life of the universe, and you wouldn’t come close to getting two of the same.”