The secret to turtle hibernation: Butt-breathing

To breathe or not to breathe, that is the question.

What would happen if you were submerged in a pond where the water temperature hovered just above freezing and the surface was capped by a lid of ice for 100 days?

And that’s because you’re not as cool as a turtle. And by cool I don’t just mean amazing, I mean literally cool, as in cold. Plus, you can’t breathe through your butt.

But turtles can, which is just one of the many reasons that turtles are truly awesome.

As an ectotherm — an animal that relies on an external source of heat — a turtle’s body temperature tracks that of its environment. If the pond water is 1℃, so is the turtle’s body.

But turtles have lungs and they breathe air. So, how is it possible for them to survive in a frigid pond with a lid of ice that prevents them from coming up for air? The answer lies in the relationship between body temperature and metabolism.

A cold turtle in cold water has a slow metabolism. The colder it gets, the slower its metabolism, which translates into lower energy and oxygen demands.

When turtles hibernate, they rely on stored energy and uptake oxygen from the pond water by moving it across body surfaces that are flush with blood vessels. In this way, they can get enough oxygen to support their minimal needs without using their lungs. Turtles have one area that is especially well vascularized — their butts.

See, I wasn’t kidding, turtles really can breathe through their butts. (The technical term is cloacal respiration.) 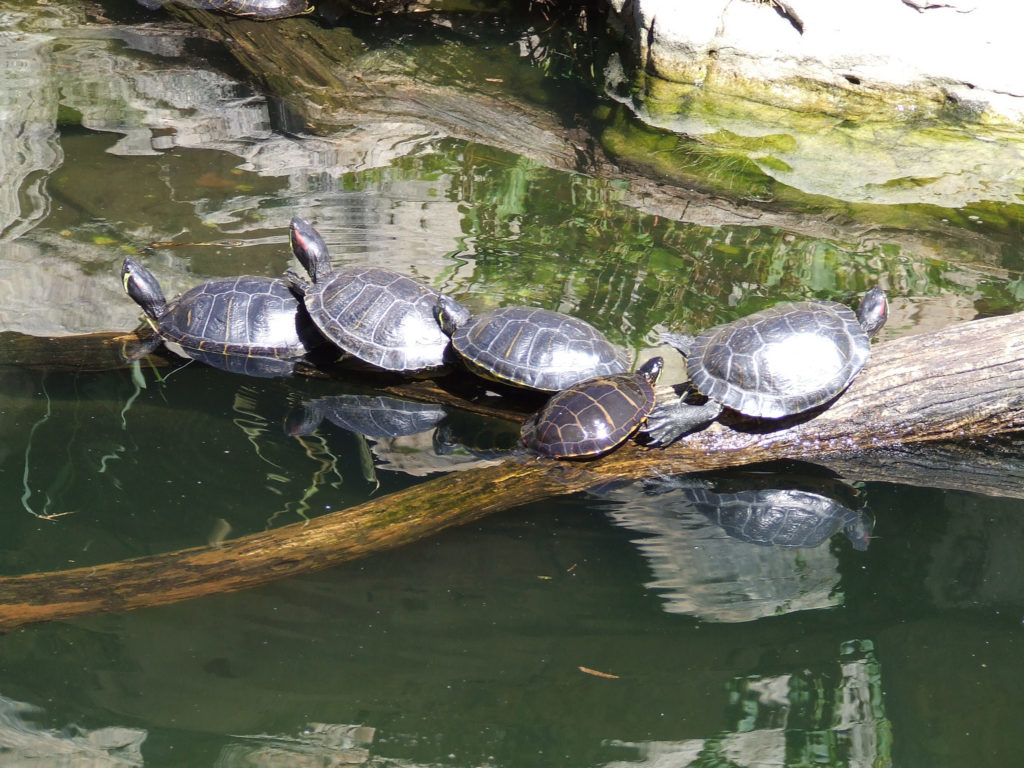 We are not turtles. We are endotherms — expensive metabolic heat furnaces — that need to constantly fuel our bodies with food to generate body heat and maintain a constant temperature to stay alive and well.

When it’s cold out, we pile on clothes to trap metabolic heat and stay warm. We could never pick up enough oxygen across our vascularized surfaces, other than our lungs, to supply the high demand of our metabolic furnaces.

For humans, a change in body temperature is a sign of illness, that something is wrong. When a turtle’s body temperature changes, it’s simply because the environment has become warmer or colder.

But even ectotherms have their limits. With very few exceptions (e.g., box turtles), adult turtles cannot survive freezing temperatures; they cannot survive having ice crystals in their bodies. This is why freshwater turtles hibernate in water, where their body temperatures remain relatively stable and will not go below freezing.

An ice-covered pond presents two problems for turtles: they can’t surface to take a breath, and little new oxygen gets into the water. On top of that, there are other critters in the pond consuming the oxygen that was produced by aquatic plants during the summer.

Over the winter, as the oxygen is used up, the pond becomes hypoxic (low oxygen content) or anoxic (depleted of oxygen). Some turtles can handle water with low oxygen content — others cannot.

Snapping turtles and painted turtles tolerate this stressful situation by switching their metabolism to one that doesn’t require oxygen. This ability is amazing, but can be dangerous, even lethal, if it goes on for too long, because acids build up in their tissues as a result of this metabolic switch.

But how long is “too long”? Both snapping turtles and painted turtles can survive forced submergence at cold water temperatures in the lab for well over 100 days. Painted turtles are the kings of anoxia-tolerance. They mobilize calcium from their shells to neutralize the acid, in much the same way we take calcium-containing antacids for heartburn.

In the spring, when anaerobic turtles emerge from hibernation, they are basically one big muscle cramp. It’s like when you go for a hard run — your body switches to anaerobic metabolism, lactic acid builds up and you get a cramp. The turtles are desperate to bask in the sun to increase their body temperature, to fire up their metabolism and eliminate these acidic by-products.

And it’s hard to move when they’re that crampy, making them vulnerable to predators and other hazards. Spring emergence can be a dangerous time for these lethargic turtles.

Field biologists tend to do their research during the spring and summer, when animals are most active. But in Ontario, where the winters are long, many turtle species are inactive for half of their lives.

Understanding what they do and need during winter is essential to their conservation and habitat protection, especially given that two-thirds of turtle species are at risk of extinction.

My research group has monitored several species of freshwater turtles during their hibernation. We attach tiny devices to the turtles’ shells that measure temperature and allow us to follow them under the ice.

We’ve found that all species choose to hibernate in wetland locations that hover just above freezing, that they move around under the ice, hibernate in groups and return to the same places winter after winter.

Despite all this work, we still know so little about this part of turtles’ lives.

So, I do what any committed biologist would do: I send my students out to do field research at -25℃. We are not restricted to fair-weather biology here.

Besides, there is unparalleled beauty in a Canadian winter landscape, especially when you envision all of those awesome turtles beneath the ice, breathing through their butts.

Jacqueline Litzgus is a professor in the Department of Biology at Laurentian University. This article was originally published in The Conversation on Nov. 21, 2017. Read the original article.