There’s a giant spot on the sun, and it’s acting weird

By the time the giant spot on the sun rotated into view on October 18, it was already 80,000 miles wide, big enough to fit all of Jupiter, big enough to lay 10 Earths, side by side, across. It is the largest spot the sun has harbored in 24 years.

But while most erupting sunspots lob chunks of plasma outward in events called coronal mass ejections, this one’s keeping its plasma close to the surface. 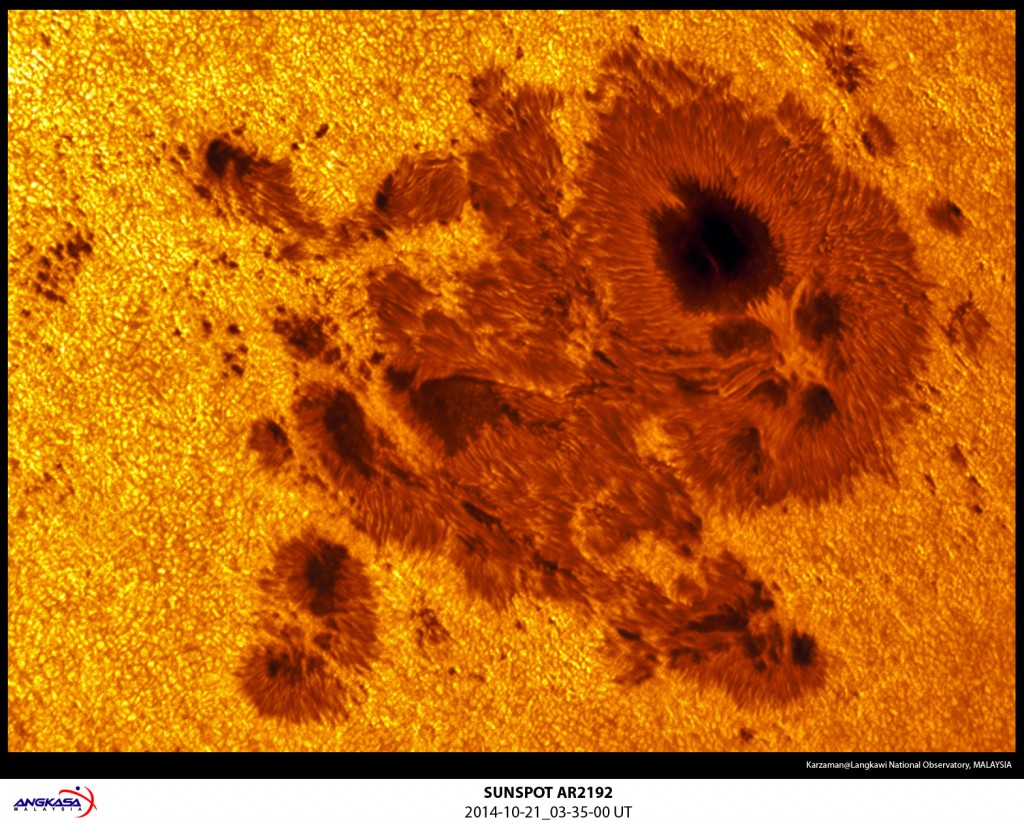 A close-up of AR12192 taken on Oct. 21, 2014, from Langkawi Nagtional Observatory, Malaysia. Image by Karzaman Ahmad and shared at spaceweather.com

The sun is not a solid body. It’s a ball of hot, hot ionized gas called plasma that’s threaded with magnetic field, created by charged particles moving around. The sun spins faster at its equator, and the result is that some of that magnetic field drags, getting twisted and knotted up in the process. As this happens, these knots of magnetic field gain energy, pressure and buoyancy, and some of them float to the surface, and penetrate it, popping out.

“It’s kind of like having a rubber band that you twist and twist, and it starts to knot up,” said C. Alex Young, associate director for science at NASA Goddard’s Heliophysics Science Division. “The same sort of thing is happening with magnetic fields. They become more twisted, they get more concentrated, and eventually you have to get rid of that energy.”

The result: a spewing forth of ionized gas.

Releasing this pent-up energy typically takes two forms: a solar flare or a coronal mass ejection, and this is key to what makes the behavior here unusual. A coronal mass ejection is made up of balls of gas ejected from the sun’s outer atmosphere, consisting of charged particles and magnetic field. The fastest CME’s travel up to 93 million miles a day, or millions of miles per hour. A solar flare is a burst of x-rays and energy, typically smaller and shorter-lasting than a CME, and rather than being launched out into space, it is caused by material accelerated back into the sun. 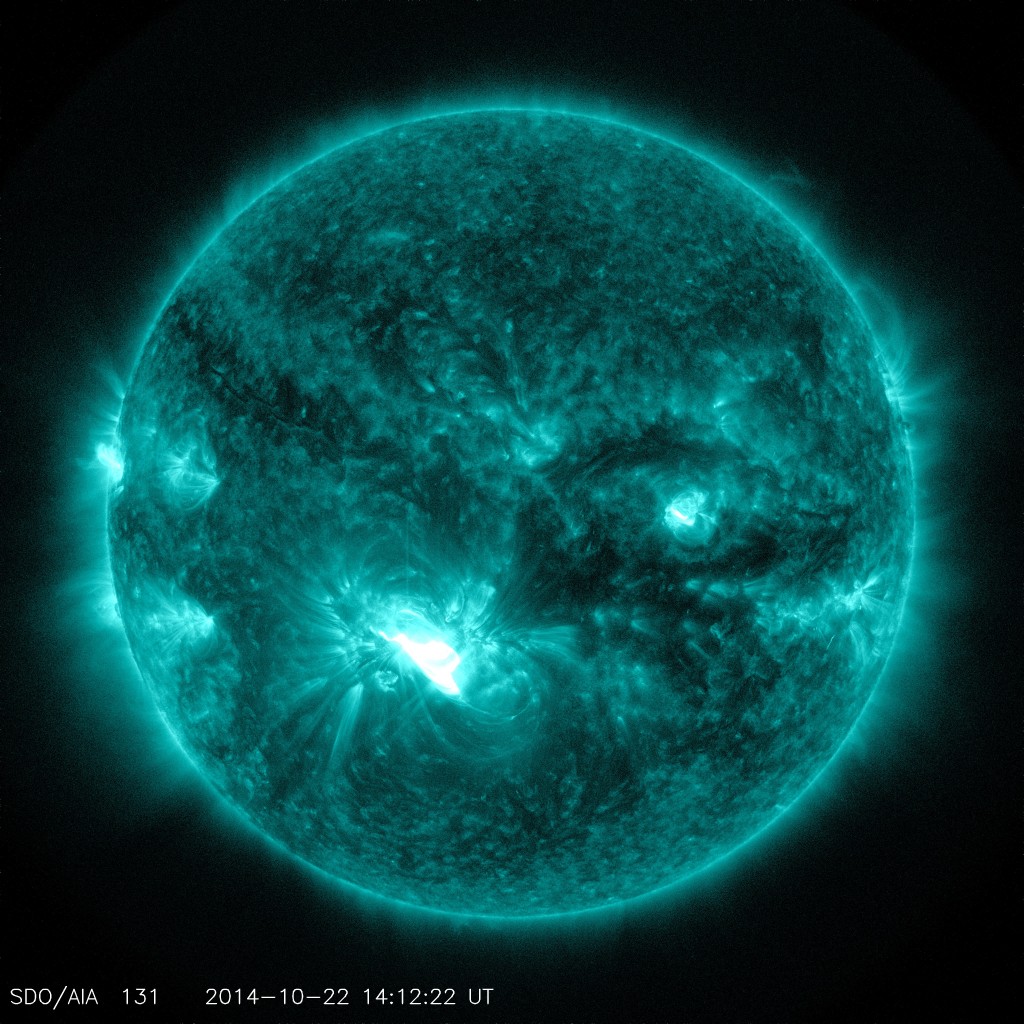 This latest sunspot is producing lots of flares — really, really, big ones — but hardly any coronal mass ejections. (Though it did produce one single CME before it rotated into our field of view.)

“I can’t remember ever seeing a sunspot producing so many solar flares and so few CME’s,” said Michael Hesse, director of NASA Goddard’s Heliophysics Science Division, the team that stares at the sun 24 hours a day. “It wants to get rid of this energy, but we don’t understand why it does it through a flare and not a CME.”

But it’s produced 10 major solar flares, Hesse said. Six of these were rated X-class, which is equivalent to 100,000 times the amount of energy produced by humans in one year. Also, a billion Hiroshima-sized nuclear weapons.

About 20 percent of all of the X-class flares produced so far in this 11-year solar cycle have come from this sunspot, said Dean Pesnell, a project scientist with NASA’s Solar Dynamics Observatory, which takes about 100,000 pictures of the sun every day.

When a solar flare erupts, it lights up the side of the Earth that’s facing the flare, and heats up the Earth’s upper atmosphere, or ionosphere, which can temporarily change its properties. Solar flares pose less danger than CME’s, but they can affect short-wave radio communication used by pilots and ships, since the radio waves are bounced off the upper atmosphere.

On the NewsHour Oct 30, Miles O’Brien reports on the lava flowing from the volcano on Mount Kilauea in Hawaii and the Jupiter-sized sunspot, which just rotated out of view.

Sunspots, first seen through a telescope by Galileo, are classified by how complex they are. Similar to a mole, a clean, round sunspot is of less interest to sun watchers.

“Imagine the doctor says you’ve got a nice little round mole,” Young said. “But when it starts to break up into pieces and change color and get jagged and complicated, that’s when you start to become concerned.”

Likewise, a more complicated structure means a sunspot contains more potential energy. And as this sunspot goes, it’s a funky one, large and complex, slightly surpassing in size the two spots that existed in fall 2003.

That was a time of extreme solar activity, known as the Halloween Storms. And those 2003 spots produced the biggest flares we’ve seen in modern times, Young said.

But this spot has its own mystery, and Hesse expects it to feature prominently at upcoming science conferences.

“The fact that this sunspot has been nicely in front of the sun where we can watch it gives us an unprecedented opportunity to study this question: How can we have flares and no CMEs,” Hesse said. “We don’t know that at all. We can look at the sunspot and see that there’s energy stored in it. We can see the complexity and know if it’s more likely to produce eruptions. But we don’t know when the eruptions will occur, and we don’t know what they will look like. And we have no clue as to whether it will produce a flare or a CME. We simply don’t understand this.”

Left: The bright light in the lower right region of the sun shows an X-class solar flare on Oct. 26, 2014, as captured by NASA's SDO. This was the third X-class flare in 48 hour. Image by NASA/SDO