This week, millions of Americans will travel by airplane to spend Thanksgiving with their loved ones, and those flights come with a major consequence: air pollution. Global passenger air travel accounts for 2.5 percent of fuel combustion-related carbon dioxide emissions. If that percentage seems like a drop in the bucket, it’s not. It’s equal to the emissions created by Germany each year.

Plus, as rapidly developing countries expand their airlines and fleets, the rate of carbon dioxide emissions from passenger flights is growing twice as fast as that of total carbon emissions.

A new study published in the journal Nature Climate Change outlines 14 ways that U.S. passenger airlines could cut carbon dioxide emissions at little to no cost to airlines and consumers. Some of the solutions could also relieve holiday headaches by reducing the time spent sitting at the gates or flying in the air. If all 14 policies are instituted, they could reduce passenger airline emissions by a whopping 50 percent by 2050 when compared to 2012 levels, the study claims.

“We suspect that the industry folks knew about this before, but perhaps for competitive reasons they weren’t interested in providing the numbers,” said Andreas Schäfer, professor of energy and transport at the University College London Energy Institute, who co-led the study. “The vast majority of the options that we looked at pay for themselves.”

The team accounted for a wide range of measures that can alter the CO2 intensity of aircraft, including technology innovations, air traffic control measures, airline operational measures and the introduction of synthetic fuels made from biomass. The team used data derived from industry sources, academic literature and independent analysis to create predictions for future fleets. They concentrated on narrow-body aircraft — 100 to 189 seats — which generate 80 percent of airline revenue and burn nearly 75 percent of commercial passenger jet fuels.

Given the cost of fuel is sure to fluctuate over the next 30 years, future oil prices in their calculations ranged from $50 to $100 per barrel. Even at $100 per barrel, which is more than double today’s oil price, approximately $40 per barrel.

So without further ado, here are 14 ways that passenger airlines can slash emissions without feeling an economic burn. For simplicity, we’ve compressed the ideas under seven themes.

1. Keep you off the tarmac 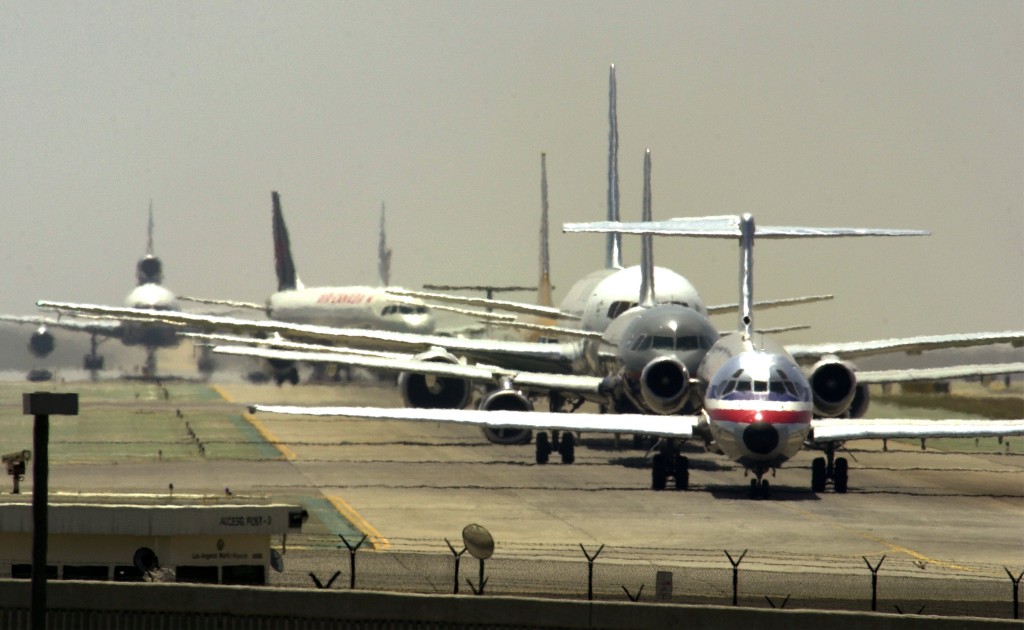 Odds are you have lived through the following: You board a plane. The plane pulls away from the gate. You prepare for takeoff. And then you just sit there.

Akin to sitting in morning highway traffic, idling on the airport tarmac wastes fuel. In 2010, passengers wasted more than 48 million minutes — that’s 91 years — due to departure taxi delays at the top 35 airports in the United States. The result was 200 million gallons of excess fuel burn.

“The idea would be to hold back the aircraft at the gate to avoid excessive congestion and only release a flight when it can proceed to the runway relatively quickly,” Schäfer said. By doing so, airplanes would lose 0.8 percent of their current emissions, and this mitigation would save $310 per ton of carbon dioxide.

2. An electric wheel, a single engine and a bit of scrubbing 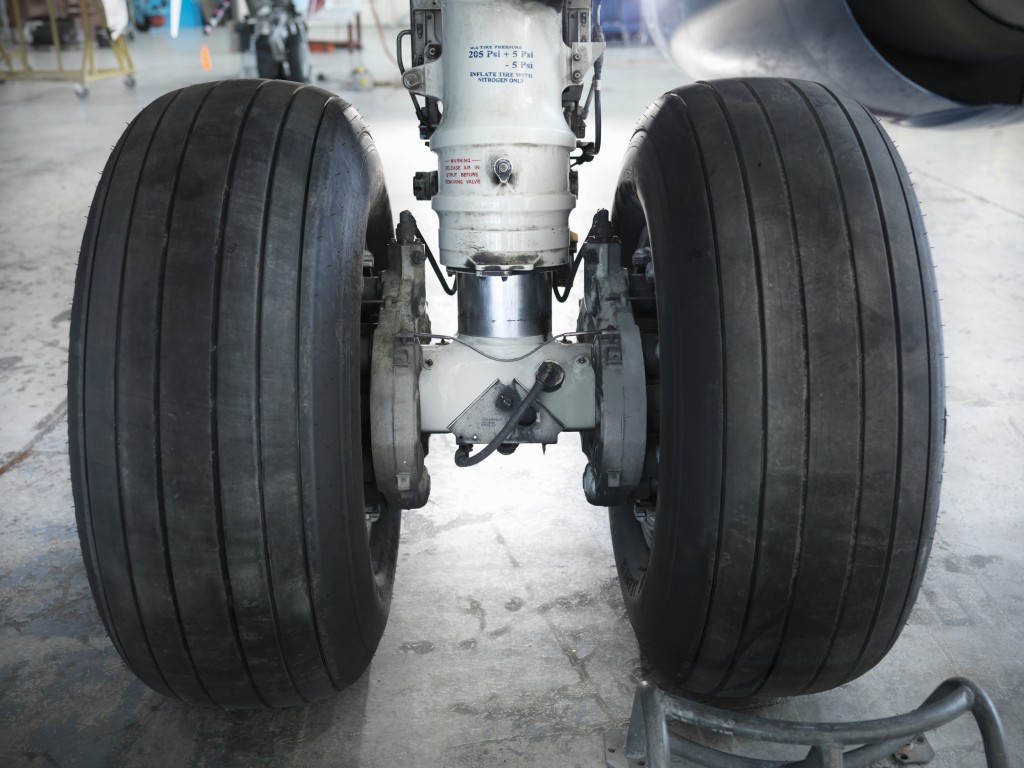 Close up of airplane wheels in hangar. Photo by Monty Rakusen

As the last example suggests, some of the best opportunities for fuel reduction come from the plane spending so much time on the ground.

“If you look at the time allocation of an aircraft with respect to its mission, then it spends only 85 percent of time in the air,” Schäfer said. “The remaining 15 percent of the time, it’s on the ground.”

Rather than use jet fuel to drive planes on the ground, taxiing could be propelled by an electric motor in the landing gear, Schäfer said. Commercial planes don’t currently feature these electric motors, he said, but aircraft suppliers are testing different configurations. Electric taxiing could cleave 2.8 percent of carbon emissions per flight and save 77,000 gallons of fuel per aircraft per year.

Grounded planes could also reduce their carbon footprint by using a single engine rather than multiple engines to taxi on the tarmac. Single engine taxiing cuts fuel burns by 37 percent when a plane rolls over the tarmac.

Finally, airplane engines tend to collect dust and dirt, which hurts their efficiency, so they’re washed when off-duty. Doubling the number of engine washes would yield a marginal reduction in fuel use — 0.025 percent — but would save $22,000 per aircraft per year.

You’re probably saying, “Wait, isn’t contingency fuel the stuff that keeps a plane afloat when there’s an emergency and it can’t land?”

Yes, that’s true, but pilots and dispatchers often load more contingency fuel than is needed, Schäfer said. Topping off the tank means a heavier plane. A heavier plane burns more fuel and spews more emissions. The study estimates that a 661-pound reduction in contingency fuel would save 11,000 gallons of burned fuel per flight and $32,800 for an airplane each year based on 2012 gas prices. 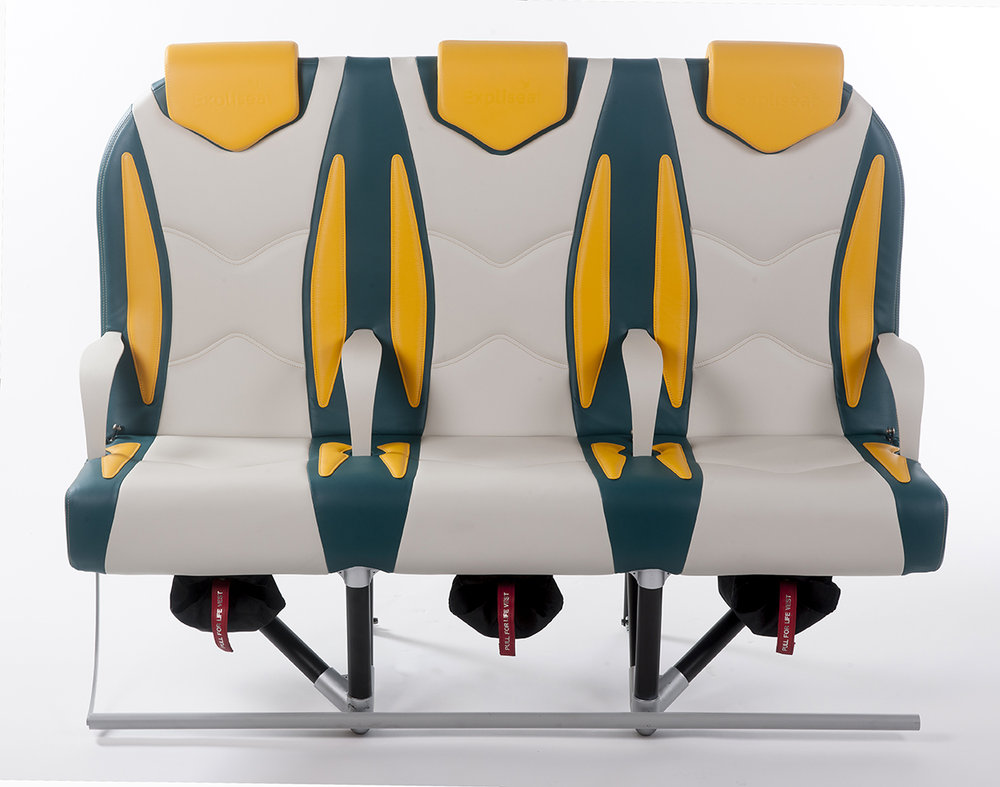 Mild cabin weight reduction, where flights carry one-third of their current load, would cut carbon dioxide emissions by 1.2 percent. This plan would save 34,000 gallons of fuel annually and $110 in operational costs per flight. The easiest way to trim the poundage would involve the installation of lightweight seats. These seats are made from materials like titanium and carbon fiber, which can weigh half as much as current chairs. Also, they tend to be slimmer, meaning wider aisles and more room to stretch your legs.

However, Schäfer also proposes a scenario where that extra room would be used to install more rows, so airplanes could carry more passengers, saving even more fuel by hosting fewer flights.

5. More passengers, forced retirement and planes with an engine on top 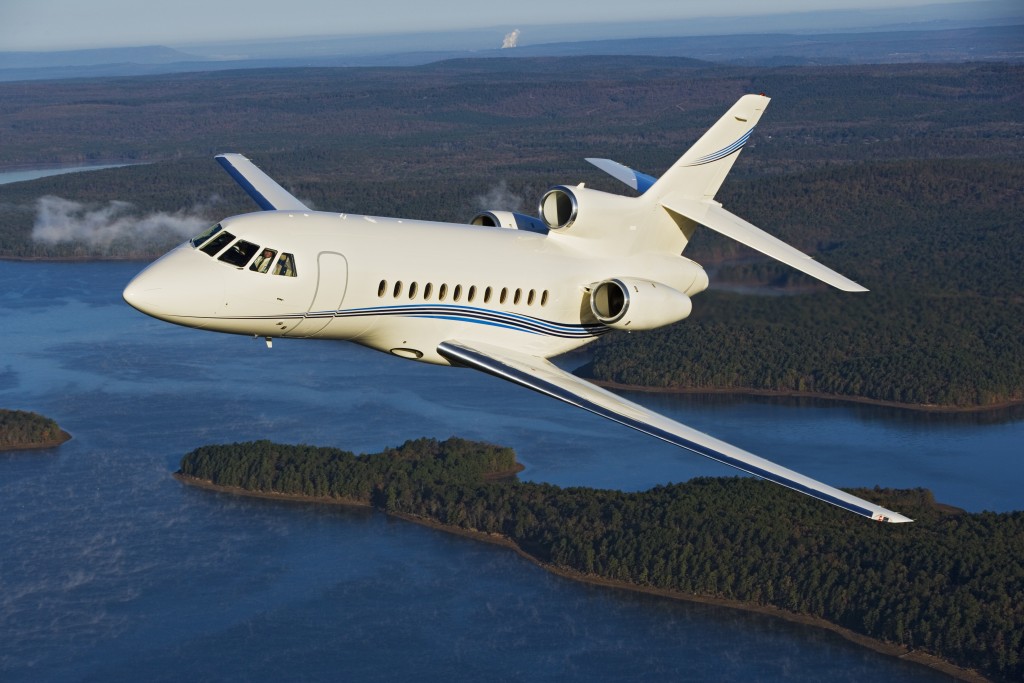 If U.S. airlines increased the number of passengers on every flight by 2 percent, they would save $280 million in operating costs and cut emissions by 0.3 percent per flight. Air travelers may object because who likes a more crowded flight?

But the process, in some ways, has already happened. Between 2000 and 2012, The number of major U.S. airlines shrank from 10 to five over the last 15 years, removing the occurrence of many competing flights between destinations. As a result, flights carry more people.

“Airplanes operate at about 84 percent capacity; we think another 2 percent on average should be possible,” Schäfer said. Flight discounts have also increased passenger loads over time.

Much like the human body, an airplane burns fuel less efficiently as it ages. An airplane burns about 0.2 percent more fuel per year. Schäfer and his colleagues envision a future where airlines retire planes that are more than 25 years old — the oldest 2 percent — by 2020. By losing these inefficient millennials, U.S. fleets could reduce energy use by nearly 10 percent.

Concurrently, the study proposes the broad adoption of new planes. The study highlights Intermediate-generation aircraft, a class of planes due for release in 2016.

“That’s not a new generation…these are modifications of existing aircraft. The main difference will be a new engine, but also some improvements in terms of aerodynamics,” Schäfer said. “These aircraft will result in fuel burn reductions of 15 percent.”

Further down the road, Schäfer predicts next-generation planes made from lighter materials — like carbon fiber — and other designs that reduce fuel burns by 40 percent.

“If you look at the history of aircraft design, the percentage of carbon fiber composites has continuously increased. The 787 is an aircraft that is already made to a large extent from carbon fiber materials,” Schäfer said.

Another new design involves an open-rotor engine, where a propeller’s metal casing is removed and you can see the blades twirl. But there’s a problem. Open-rotor engines are noisy, so to reduce the discomfort to passengers, the new propellers may sit on top of planes rather than under the wings. 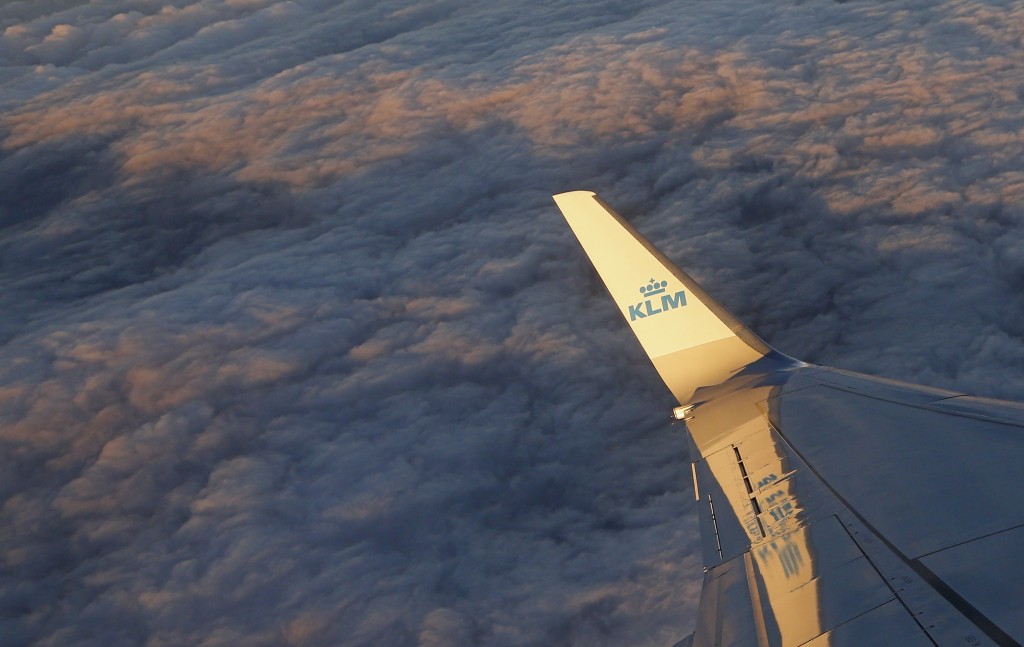 A blended winglet is seen on the left wing of a Boeing 737 airplane of Dutch airline company KLM near Vienna. The wing tip extensions are used to reduce induced drag, provide extra lift and save fuel. Photo by ALEXANDER KLEIN/AFP/via Getty Images)

New brakes made from carbon rather than steel could reduce the weight of individual of flights by 700 pounds and save 10,000 gallons of fuel per plane per year. The new brakes would cost $30,000 each, but overall airlines would pocket $1,000 per plane through fuel savings.

Blended winglets are those pointy, upturned structures that you see on the ends of some airplane wings. The winglets reduce drag, so an airplane can smoothly cut through the air. Planes with winglets could annually save 83,000 gallons per aircraft and $247,000 in operational costs. Most Boeing 737s are already retrofitted with winglets, while Air Bus A320s aren’t, so future savings will come from updating the latter, Schäfer said.

7. Arrive on time, fly straight and avoid the bumpy air

Wind drag during ascent and descent can decrease fuel efficiency.

Jets spend the majority of their time in flight, which consequently is where the biggest inefficiencies surface. Restricted airspace can keep planes from taking the straightest path from departure to destination. As a result, a plane might lose time and often arrive at a time when others are trying to land. This creates congestion and leads aircraft to circle in holding patterns.

“Pilots should be allowed to adjust the speed of their aircraft in order to arrive at the exact point in time when landing would be possible,” Schäfer said.

While in flight, airplanes tend to cruise at a single altitude, which can be wasteful too. That’s because wind drag can vary by altitude, so planes could save fuel by cruising in less choppy air. The same rules could apply to the descent and climbing stages of a flight. Taking the path of least resistance in these scenarios would cut 7.8 percent of airplane emissions.

So your flight would be smoother, and you would arrive on time. It’s a win-win, though pilots and crews would need to be retrained to execute these new maneuvers. Also, planes would require new guidance and navigation software to make the adjustments. Those cost money, but overall, the airline industry would save up to $800 for every ton of carbon dioxide that they’re not pumping into the air.

Overall, Schäfer won’t be surprised if the U.S. airline industry adopts all of these measures, given that most save money. His major worries revolve around the growing fleets in developing countries, which have a habit of buying retired, fuel-inefficient planes from western carriers.

He also spotlights an opportunity to reduce CO2 emissions by switching from petroleum-based fuels to synthetic ones made from biomass. Yet despite recent advances such as jet fuel made from sugarcane, biogas cannot currently be made at a commercial-scale for airplanes.

The attraction of synthetic fuels is that you can design them to have very similar characteristics to petroleum-derived fuels, Schäfer said, “So you wouldn’t need drastic changes to current engines.”

Using synthetic fuels could cut airplane-based CO2 emissions by a quarter in the future.