These plastic-munching bacteria could degrade soda bottles in weeks

In 2014, humans produced 311 million metric tons of plastic — that equals about 3,500 of the world’s largest aircraft carriers. In the environment, this plastic can take decades to break down, and some have wondered if nature would be forced to adapt. A new study argues yes, and on one of the smallest levels possible.

A plastic-eating species of bacteria has been uncovered by researchers in Japan. This microbe munches on one type of plastic, polyethylene terephthalate, or PET. PET is one of the most abundant forms of plastic on Earth and typically takes five to 10 years to naturally degrade. This bacteria could break it down six weeks. This discovery, scientists say, could play a key role in how we rid the world of this insidious plastic.

“I was very surprised to find microorganisms that degrade PET, because so far, it has been said that PET is a nonbiodegradable plastic,” said microbiologist Kohei Oda of the Kyoto Institute of Technology in Japan who co-authored the study published today in the journal Science.

PET is everywhere. You’re probably most acquainted with its presence in water and soda bottles. But it is also woven into carpet and clothing fibers like fleece. Salad containers, plastic peanut butter jars, potato-chip bags, oven-ready meal trays and other food storage containers use PET too. Thanks in part to its ubiquity, this plastichas the highest recycling rate in the world. (Though, despite leading the pack, nearly half of the world’s PET still isn’t recycled.)

Oda and his colleagues didn’t accidentally stumble on this plastic-gobbling bacteria, which the researchers named Ideonella sakaiensis. Microorganisms often live on the frontlines of the biodegradation battlefield. Germs in nature are renowned for secreting enzymes that break down complex materials into simple compounds.

The surprise is that this bacterium can penetrate the surface of this plastic, which is notoriously resistant to attacks by bacteria, and break apart its chemical bonds, said biochemist Uwe Bornscheuer of the University of Greiswald in Germany, who wasn’t involved in this study. That’s why this new species is so unique. 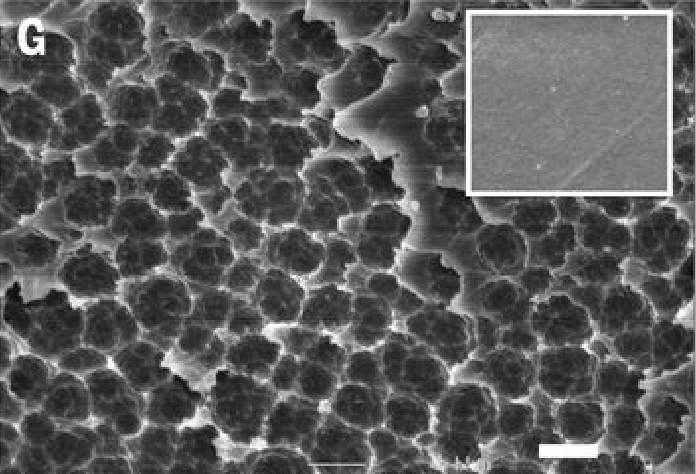 Scanning electron microscopy image of the degraded surface of a piece of PET after 60 hours with Ideonella sakaiensis. The inset shows the original smooth surface of the PET plastic. Scale bar, 1 μm. Photo courtesy of Yoshida et al., Science, (2016).

To find Ideonella sakaiensis, the researchers collected 250 samples of plastic debris from sediment, soil, wastewater and sludge from a plastic bottle recycling site in Osaka, Japan. One soil sample contained a distinct microbial community that could survive on PET as its sole food source. Ideonella sakaiensis was the survivor.

Genetic and biochemical analysis revealed that the microbe produces two enzymes — PETase and MHETase — that fully break down the plastic. The chemicals made by this bacterial bioreactor are consumed as food, though one of the byproducts is a compound called terephthalic acid. Bornscheuer wrote in an commentary about the study that if terephthalic acid could be isolated from these bacteria and reused, then it could produce huge savings in terms of the amount of oil needed to make the plastic in the first place.

Both Oda and Bornscheuer hope the bacterium or its two enzymes might one day be used as a sustainable method of destroying plastic at recycling facilities like the one where the discovery was made.

“The bacterium was found at a recycling site. Why not use it there?” Bornscheuer said, but added the strain may need genetic modification to make the consumption process more efficient.

Another question is where and when did Ideonella sakaiensis spring into existence and develop this appetite for plastic. PET plastic has only existed for 70 years, a relatively short time window for evolution. Prior to this study, the ability to biodegrade PET had been limited to a couple species of soil fungus. The enzymes that allow Ideonella sakaiensis to penetrate PET’s surface in the first place remain unknown.

In principle, the bacteria could also work on microplastics in water, Bornscheuer said. One recent estimate says the world’s oceans contain 15 to 51 trillion micro-sized particles of plastic. However, Bornscheuer said that future studies must determine if the bacteria can survive in the salty seas of the ocean, which can also fluctuate dramatically in temperature.

“For sure, many scientists will have a close look into these options now that the paper is published,” Bornscheuer said.

Left: Microbiologist skimmed through waste and soil samples at a plastic recycling facility and found a plastic-eating species of bacteria. Here it is after noshing on plastic for 60 hours. Photo courtesy of Kohei Oda