During the holiday season, El Niño stunned and terrorized much of the nation. In New York City, people ice skated in shorts and T-shirts. Meanwhile, unseasonably warm storms fueled deadly tornadoes in Texas and doused the Midwest with floods, claiming more than 50 lives.

These storms are a sobering prelude for 2016, and if history has its way, El Niño could spawn a slate of topsy-turvy happenings in the new year, influencing everything from the price of crops to the flight patterns of migratory birds to the abundance of infectious diseases, like West Nile virus. This is the first of a two-part story on those possible changes.

First, some background. The El Niño Southern Oscillation (ENSO) is a patch of warmer-than-normal water in the eastern and central Pacific Ocean that develops around the equator. Picture it as a spoon stirring a cup of coffee, said Brad Rippey, a meteorologist with the U.S. Department of Agriculture.

The heat acts like the spoon bowl, pushing huge currents around the Pacific. But then some of this warmth seeps upward from the moving water, like an invisible spoon handle, and begins stirring the air.

“Eventually everything is moving in tandem,” Rippey said, and that’s when things get weird for the planet’s weather.

The U.S. started seeing major weather disruptions as early as last spring, Rippey said, when storms and floods ripped through Oklahoma and Texas. But recent events have surpassed temperature expectations and grown into what’s called a super El Niño. Though ENSOs happen every two to seven years, this current El Niño is only the third supersized version since 1950 and the first since 1998.

Super El Niños: past and present. The maps above show a comparison of sea surface temperature (SST) anomalies in the Pacific Ocean as observed during the 1997 and 2015 El Niño events. NASA suggests that 2015’s El Niño is as big as if not bigger in heat content than the 1997 El Niño. Image by National Center for Atmospheric Research VisLab

“We had a bit of a lull as we often do with El Niño during the summer months, but then the effects came roaring back as we moved back into the cold season,” Rippey said. “You can’t blame individual storms on an El Niño, but the pattern is conducive to the formation of these very strong, energetic storms that we’ve been seeing rolling across the United States, one after the other, creating all kinds of problems like heavy rain, blizzard condition and flooding.”

Farmers are sometimes victims and sometimes beneficiaries, during and after an El Niño. The dramatic weather patterns cleave the country in half. Southern regions become wetter and colder than usual, while the north becomes dryer and warmer.

In a general sense, El Niño “rain makes grain,” Rippey said, but this year may have one exception: red winter wheat. Winter wheat is planted in late autumn and allowed to briefly mature before snows hit. The snow insulates the seeds, and its moisture favors the plants during their cold dormant months. Winter wheat accounts for 70 to 80 percent of total U.S. wheat production, according to the USDA, but this year’s batch is being threatened by El Niño.

Winter wheat has three major production areas in the U.S.: The Great Plains, the Pacific Northwest, the mid-South/lower Midwest. This last region, which stretches from the Mississippi Delta into the Midwest, is known as the “soft red winter wheat belt.” And it’s too wet right now, Rippey said.

If these fields remain underwater, the quality of the crop will be compromised. A temperature drop in the region could also freeze the soil and cause heaving, wherein the roots are compromised. Wheat in the Midwest and mid-South accounts for nearly a quarter of U.S. supply.

Red winter wheat supports the supply of flour, so time will tell if these weather trends hurt the price of cookies, pastries, flat bread, crackers and other snack foods. The Great Plains have received a favorable dusting of snow this winter, Rippey said, and precipitation in the Northwest has been robust so far, though it’s expected to taper. Earlier this year, El Niño-driven rain in the American Midwest put “upward pressure on wheat prices,” according to Nasdaq. But Rippey believes the extra precipitation should be a boon for crops planted in the spring, such as corn and soybeans.

El Niño: A boost and bane for weed cultivation

For an example of what El Nino is doing to spring crops in the Pacific Northwest and California, consider marijuana. In Washington, growers are hoping the warmer-than-normal conditions expected in spring 2016 can repair damage caused by surprise snowstorms that hit the region this past November.

“It caused a bunch of our crops to freeze before we could harvest. We lost about half our crop. Economic damages were probably half a million dollars,” said Grant Guelich of American Farms in Entiat, Washington. “There’s so much extra snow this year. Usually you have ample time to winterize your farms, but we didn’t really have time this year.”

Guelich expects November’s freeze to hurt the supply of recreational cannabis in Washington, raising its price, but he wonders if the snow might hurt product quality overall.

Further south in California, extra rainfall from El Niño is welcome relief for drought-stricken land — and the environmental strain caused by cannabis farms. Marijuana fields boomed in Northern California around the same time the state’s four-year drought began, said Scott Bauer, a senior environmental scientist with the California Department of Fish and Wildlife.

Around 2010, he and his colleagues started noticing a substantial increase in marijuana cultivation in the hills of Humboldt, Trinity and Mendocino County, a region already nicknamed the Emerald Triangle because of its reputation for cannabis production. This team ultimately discovered that these extra farms were straining the region’s streams. Using satellite imagery, low-altitude aircraft flights and field surveys, they found three out of four watersheds in the Emerald Triangle were almost sapped dry by marijuana cultivation. They published the findings in March.

Bauer says the precipitation brought by El Niño might not rectify the situation. Storms are currently fortifying snowpacks in the Sierra Nevada mountains, but this major water source for California “isn’t a big influencing factor for streamflow in the Emerald Triangle,” Bauer said. He is also worried that heavy rain will wash away dirt roads constructed by farm owners.

“We’re talking about weed being grown on hills that are very steep. It’s highly erosive soils, and you see a lot of amateur construction activities,” Bauer said “Some roads fail and then all that sediment washes into the stream and harms the habitat.”

If precipitation from El Niño plows into late spring, as expected, it may relieve some of the burden caused when cannabis planters start their growing season in April, but there’s a catch. The last two super El Niños were immediately followed by its counterpart, La Niña, which tends to trigger drought in California.

“Two is a small sample size, but it wouldn’t be surprising to see a rapid development of La Niña, which comes with the enhanced risk of hot, dry summers in some part of the U.S.,” Rippey said. “This could bring a risk of perhaps expanding droughts in various areas as we move on through next winter and into 2017.”

But for now, Rippey is enthusiastic about El Niño and the prospects for agriculture in the coming year.

“From a positive standpoint, we have our lowest level of U.S. drought in about five years — since the tail end of the previous El Niño in 2009 to 2010. We entered a period of elevated drought starting in 2011, and we’re finally easing away from that,” Rippey said. “Less drought is always good for agriculture.”

Finally, a floral fireworks display has begun across much of the East Coast due to the warm, wet conditions. Here’s what’s happening at the U.S. Botanic Garden in D.C.

Japanese apricots (Prunus mume) are in full bloom right now at the U.S. Botanic Garden Conservatory, according to their supervisor of gardens and grounds John Walsh. 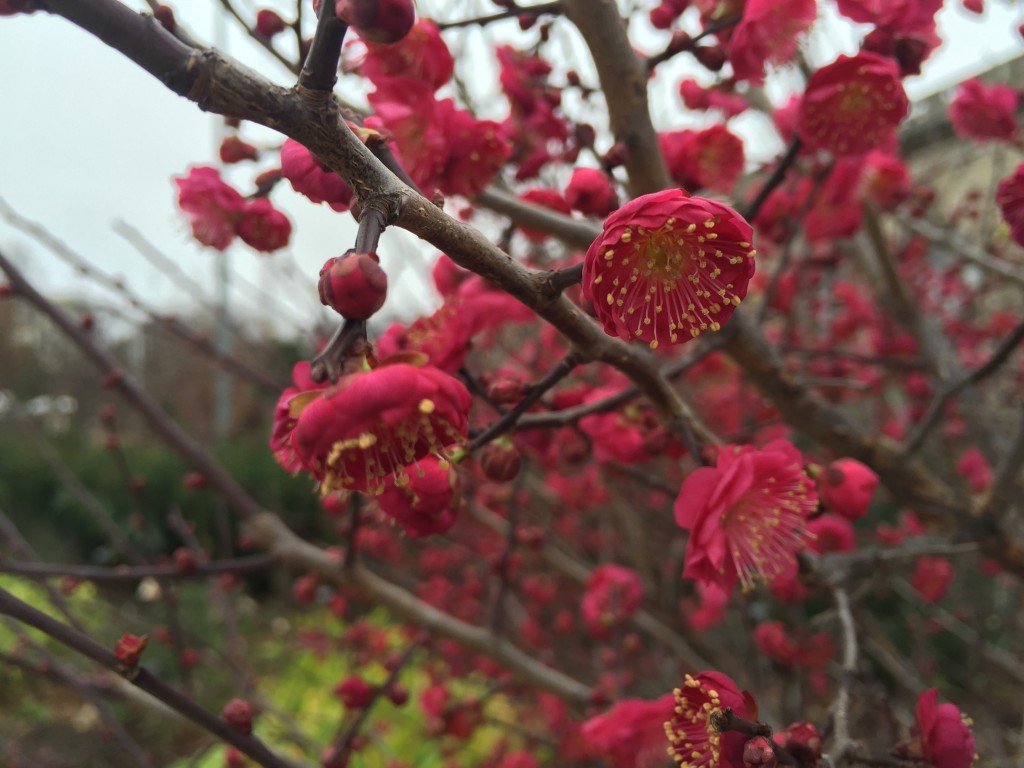 Daffodils, Lenten roses and snowdrops have bloomed early too, Walsh said. The same may occur with Washington D.C.’s famous cherry blossoms. Last year, the nation’s capitol had a very mild November and December, which was followed by a very cold spring, Walsh said. As a result, the cherry blossoms bloomed very late.

“It was probably the latest that they had bloomed for several decades,” Walsh said. “I think that it’s too early to tell what might happen this year, because it depends on what happens over the next few months. If it’s warmer than normal, then they would bloom early, but if it gets cold, like during 2015, then it’ll be delayed.”

Blooming ahead of schedule doesn’t harm the plants, Walsh said, but you should enjoy these early arrivals while you can. Most perennial flowers only bloom once a year. 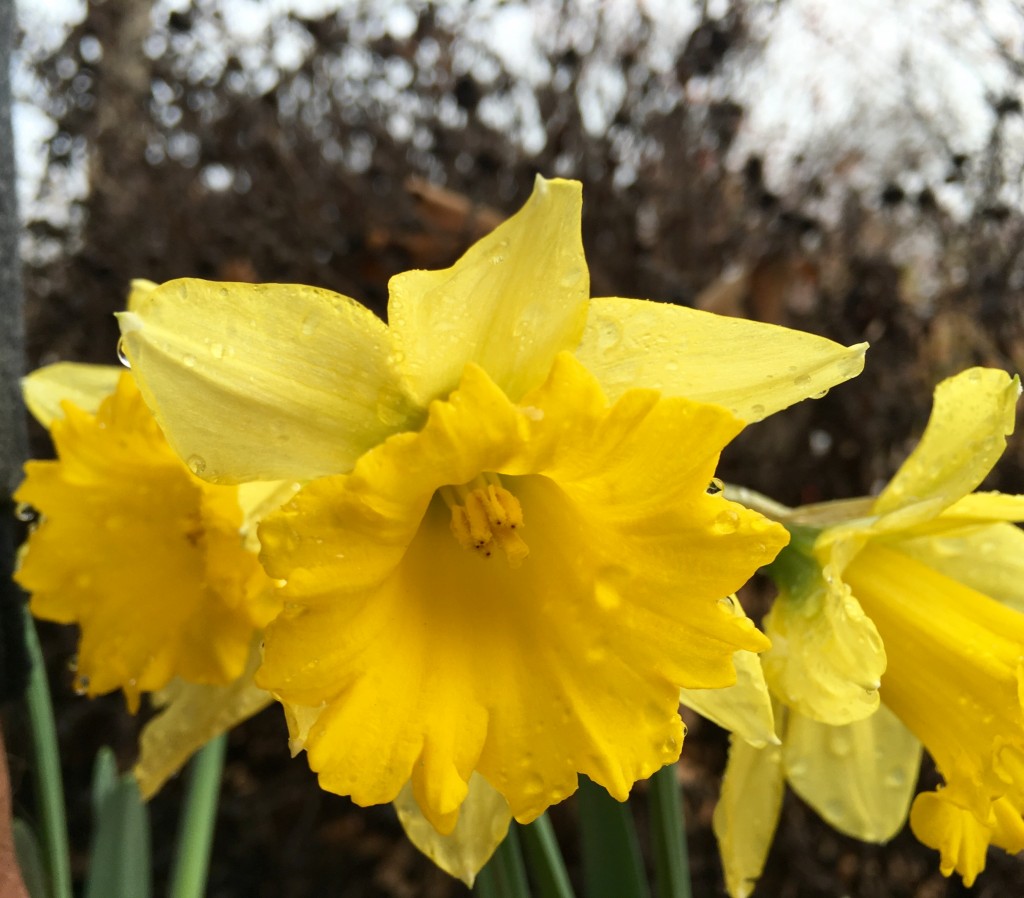 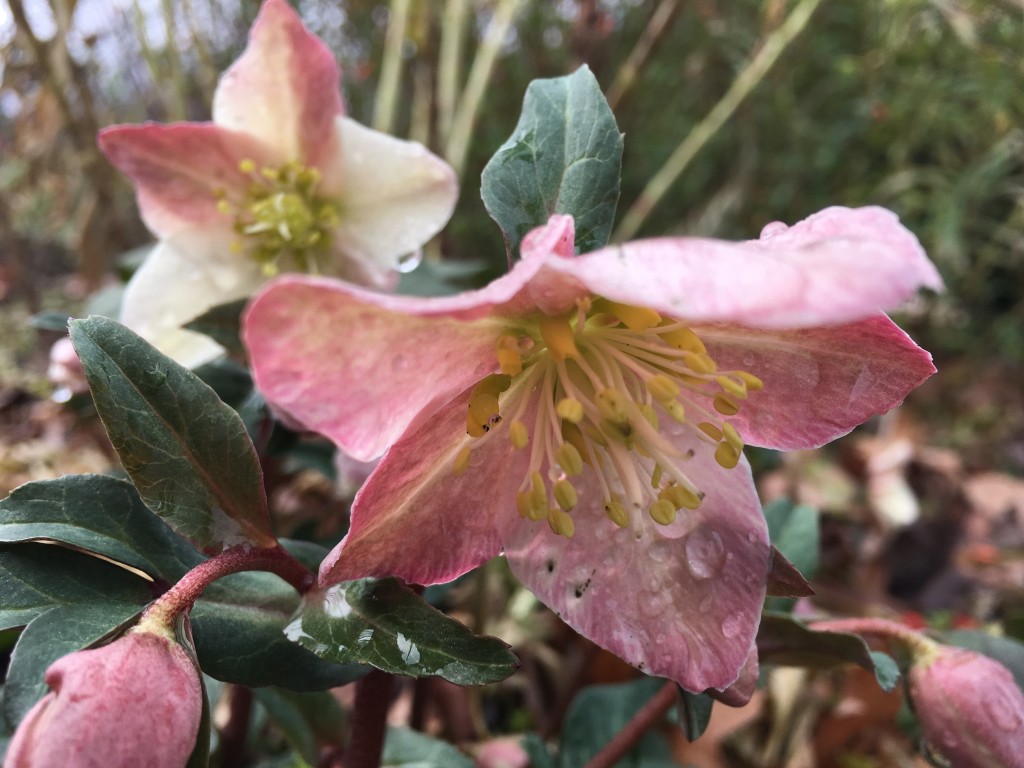 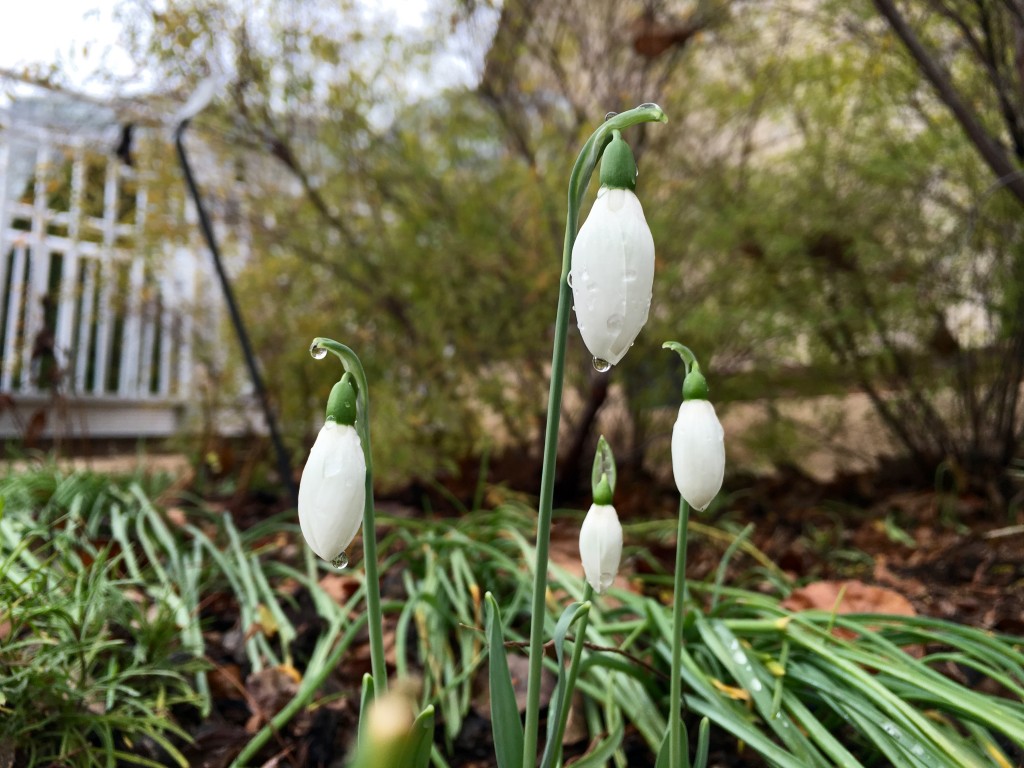 Left: ARNOLD, MO - JANUARY 2: A flooded out football field is seen at the Jefferson County Youth Association on January 2, 2016 in Arnold, Missouri. After the record crest of the Meremac River after days of rainfall, the community looks to start the cleanup efforts and relief for victims of area flooding. (Photo by Michael B. Thomas/Getty Images)