Miami. Boston. New York City. Many American coastal metropolises will face more severe flooding in coming years thanks to global warming and sea level rise. But while these cities are making plans to counter rising waters, there aren’t definitive projections of exactly how much the coastlines will change . At the moment, scientists predict the sea level will rise anywhere from less than a foot to more than six feet by the end of the century.

That’s why the International Thwaites Glacier Collaboration — a new $25 million mission of a breadth and depth rarely seen in climate science research — wants to nail down a much better estimate of global sea level rise. The group announced Monday at the headquarters of the British Antarctic Survey in Cambridge, UK, that it will fund eight massive five-year studies of the Thwaites Glacier in Antarctica.

The Thwaites Glacier acts like a giant cork that stops tons of ice on Western Antarctica from entering the ocean. So significant melting of Thwaites would allow ground-based ice to tumble into the ocean and quickly add to sea level rise. The collaboration will give scientists better estimates on how quickly this is happening.

The eight U.S.-UK science projects are featured in the ITGC program will collect bedrock core samples, launch autonomous underwater vehicles under the ice, and scan the area with radar.

This endeavor, sponsored by U.S. National Science Foundation and the UK’s Natural Environment Resource Council, is the largest joint venture in Antarctica by the two countries since the late 1940s. Another $25 million or more will be provided for the logistical challenge of traveling onto and off of the precarious Thwaites Glacier, where there is no permanent base. (Full disclosure: Part of the funding will go to NewsHour science correspondent Miles O’Brien, as his team will embed with the researchers and document this historic mission.)

Why focus on the Thwaites Glacier?

Melting glaciers are considered the largest contributors to sea level rise. If all of Earth’s ice melted, sea levels would rise by more than 200 feet.

That’s not likely to happen anytime soon, but the fact remains: Almost 90 percent of the world’s ice exists in Antarctica, which also happens to be the continent people understand the least.

In this land of enigmas, one particular spot has piqued the interest of the scientific world: the Thwaites Glacier. 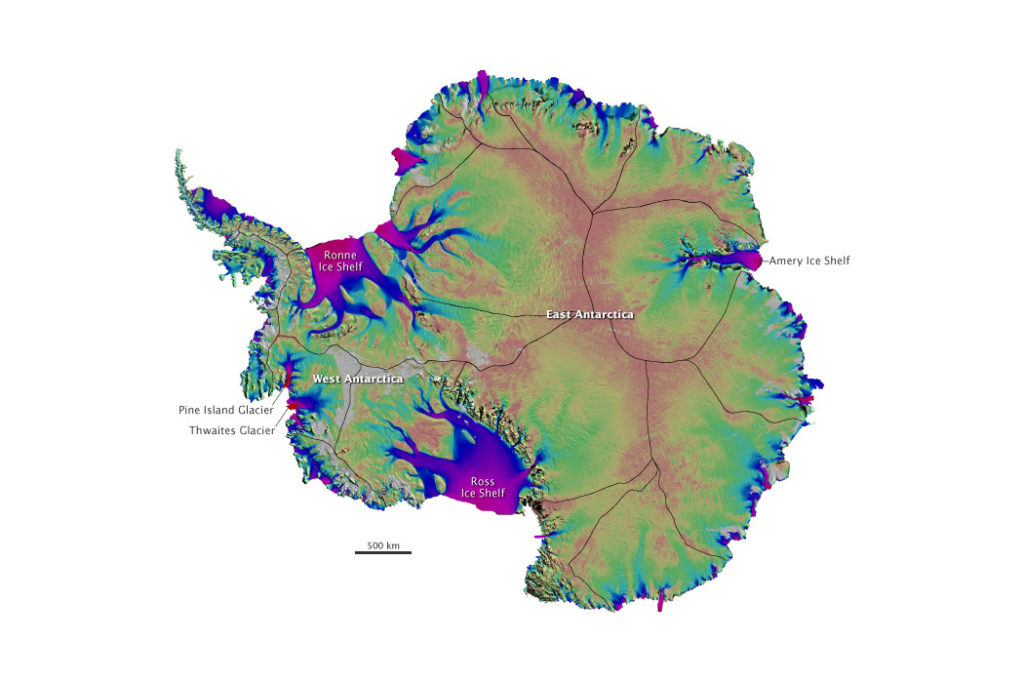 Map of fastest moving ice in Antarctica, based on radar images collected by satellites from Canada, Japan, and the European Space Agency between 1996 and 2009. The fastest moving areas are glaciers and ice shelves along the edge of the ice. The Pine Island and Thwaites Glaciers (left) are moving most. Image courtesy Eric Rignot, NASA Jet Propulsion Laboratory and University of California Irvine.

The Thwaites Glacier seem puny, taking up a little more than 1 percent of Antarctica’s total area, but it is a major reason why ice is moving from West Antarctica out into the ocean. The rate it’s shedding ice has doubled since the 1990s, and two key factors could augur an impending collapse.

The first is the Antarctic Circumpolar Current — the warm Southern Ocean equivalent of the Gulf Stream — has shifted recently and is now brushing up against Thwaites.The warmer current is melting the seafloor-anchored glacier, essentially thinning the Thwaites from below.

“Thwaites is where the rubber hits the road, or not,” said New York University mathematician David Holland, who studies climate system dynamics, including the relationship between ice and the ocean. “It’s cold around Antarctica, except it’s warm right here, which is really weird.”

Warm by Antarctic standards is just a smidge above freezing. Holland isn’t exactly packing his swimwear, but this warming, even if slight, is crucial. “Even a change of one degree at the freezing point is a game-changer,” Holland said. 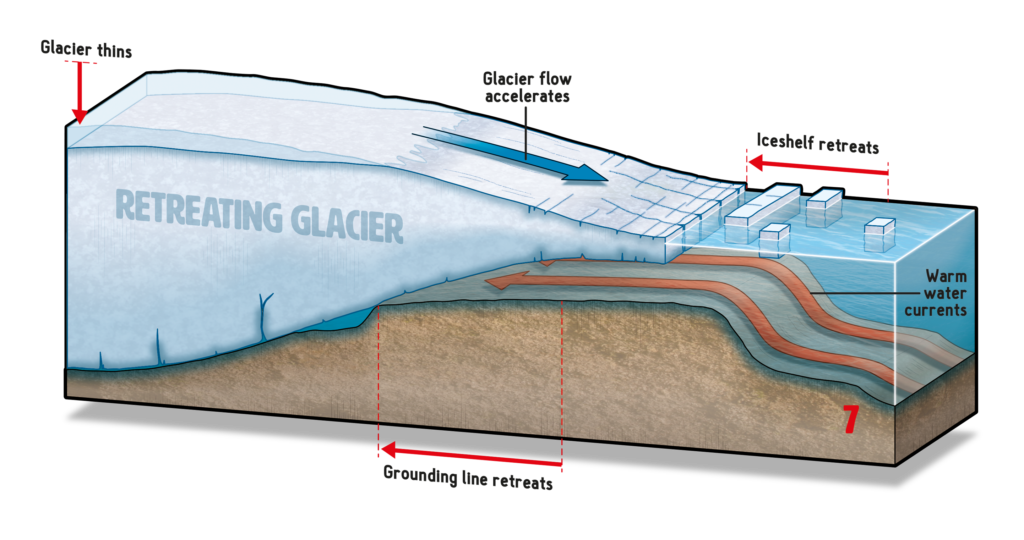 Diagram of how the Thwaites Glacier is destabilizing. Photo by NERC, Ben Gilliland

The second key factor is known as the Marine Ice Sheet Instability, and it could lead to the catastrophic and quick collapse of the entire West Antarctic Ice Sheet. If that were to happen, sea level would rise by almost 10 feet.

Glacierslike the Thwaites that sit on the ocean floor are anchored by rugged features of the seafloor — undersea hills, ridges, and mountains. But at this point, the Thwaites Glacier is, figuratively speaking, hanging on by a thread — scientists aren’t sure how it is kept in place, or how much stabilizing seafloor it has left. That’s part of what Holland and his team hope to discover.

“It’s stabilized there,” Holland said, “but it looks like it’s coming off that bump and then it’s all downhill to the South Pole.”

This means warmer water could easily seep deeper and further underneath the glacier, thinning it and drastically destabilizing the ice above.

Holland and his colleague Keith Nicholls are behind one of the eight ITGC projects. Their experiment, called MELT, will involve drilling down to where the Thwaites meets the ocean and exploring it with state-of-the-art tools. Their project aims to understand how a warming ocean creeping in under the glacier is affecting its melting.

In 2013, producer Kate Tobin and Miles O’Brien joined Holland and his team in Greenland to see how they do their work. Check out the story for the National Science Foundation’s Science Nation series:

The Thwaites’ dramatic changes are recent, and Holland concedes that it is unclear whether the Antarctic Circumpolar Current shifted due to a natural variation or because of human-caused climate change.

Still, whether the shift was natural or not, a focus on fragile glaciers like Thwaites is crucial to our understanding of the future of this planet’s melting ice.

“Scientists just don’t know how likely or unlikely it is that these glaciers are unstable and can rapidly discharge their ice,” said Dr. Waleed Abdalati, director of University of Colorado’s Cooperative Institute for Research in Environmental Sciences, who is not involved in the ITGC partnership. “The answers are locked up in how the ocean and ice interact with one another.”

The first ITGC projects will start at the end of this year, and Holland is already looking forward to going back to Antarctica. Beyond the science, Holland can’t wait to get back to the “serenity and beauty” of one of the most striking and mysterious places on Earth.

We hope you’ll follow along! What do you want to know about the project or Thwaites? Let us know in the comments.

Left: The Thwaites Glacier acts like a giant cork that stops tons of ice on Western Antarctica from entering the ocean. Photo by VCG Wilson/Corbis via Getty Images