To feed the world and then some, farms and pastures take up a lot of space — 40 percent of all land globally is used for agriculture — and inevitably take a significant toll on the environment.

Agricultural practices generated 10 percent of total greenhouse gas emissions in the United States in 2019. Excess nitrogen and phosphorus — standard soil nutrients found in manure or chemical fertilizers — can leak from croplands into nearby waterways and eat up the oxygen in aquatic ecosystems, sometimes killing the creatures that call them home, and even making humans sick.

Meanwhile, as the costs of fertilizer, equipment and land itself rise, “farmers have to farm more and more acres” to make ends meet, said landscape ecologist Lisa Schulte Moore. As it becomes increasingly difficult for farm operations to be profitable enough to sustain people’s livelihoods, there are fewer and fewer active farms, according to the USDA’s Census of Agriculture, conducted every five years.

“I bring people together across disciplines to understand agriculture and potential solutions to these issues in a multidimensional way.”

Schulte Moore thinks that, with the right approach, agriculture “has the potential to be a solution” to its own problems. “My whole focus is really on how we design an agricultural system that not only helps us derive what we need as people — food, fiber and fuel — as the human population continues to expand, but [in a way that has] a much lighter footprint on the planet,” she told the PBS NewsHour.

A professor in the Department of Natural Resource Ecology and Management and associate director of the Bioeconomy Institute at Iowa State University, Schulte Moore was awarded a MacArthur “genius grant” this year. She refers to herself as “a bridge person.”

Nutrients from major agricultural states like Iowa drain into the Gulf of Mexico, contributing to a hypoxic — or oxygen poor — “dead zone” along the Texas-Louisiana coast that researchers measure each year. This video from NOAA explains more.

“I bring people together across disciplines to understand agriculture and potential solutions to these issues in a multidimensional way,” Schulte Moore said. “So, not just looking at it from an agronomic perspective or a [natural resources, economic or sociological] perspective, but bringing all of these disciplines together.”

The approach she takes to her current work echoes her academic and professional background in forestry and wildlife, which she brought with her when she left the Great Lakes region for Iowa and learned to apply her skillset to agriculture.

An Iowa State-based program co-founded by Schulte Moore known as STRIPS, or “Science-based Trials of Rowcrops Integrated with Prairie Strips,” is a prime example of her work in action. By incorporating small stretches of native prairie vegetation within agricultural fields that grow crops like corn and soybeans, the program is able to help bolster biodiversity, reduce nutrient runoff and improve soil health in participating farmlands.

To date, the program has helped farmers and landowners plant more than 11,000 acres of prairie strips across 11 states. The fact that Schulte Moore and her team have worked alongside a combination of professionals in the agriculture industry has helped ensure that the myriad stakeholders involved see practical, accessible and measurable impacts. 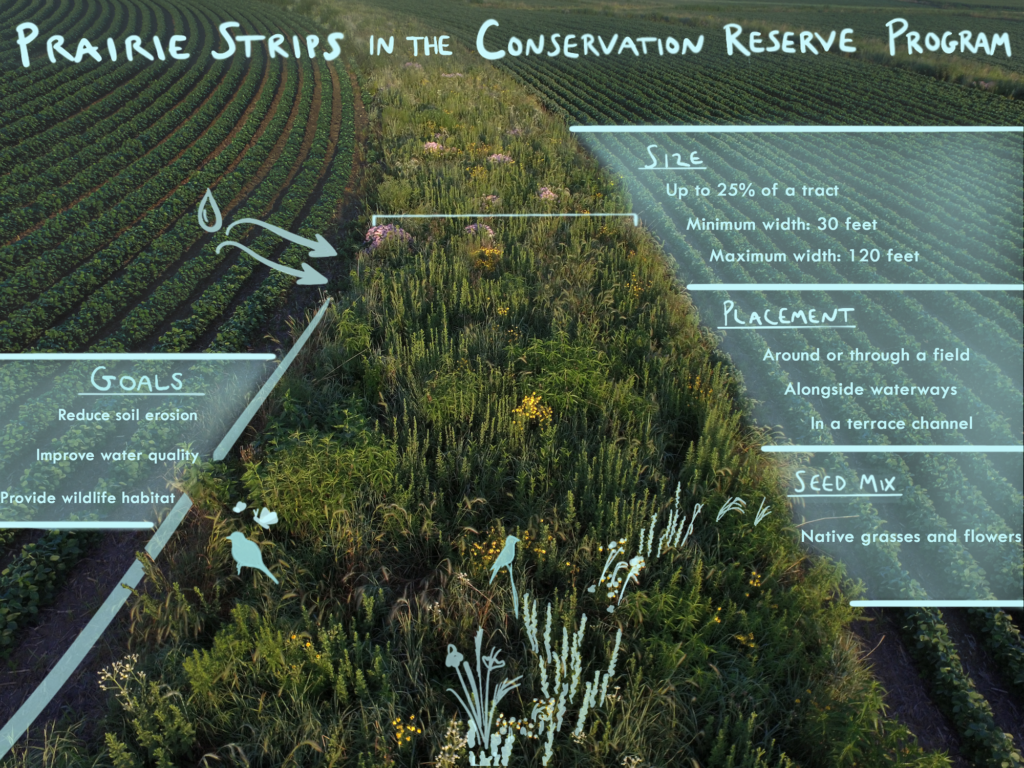 Schulte Moore talked with the PBS NewsHour about the challenges facing American farmers, how agriculture has evolved over time in the U.S. and how prairie strips benefit the landscape.

This interview has been condensed and edited for clarity.

What do the conversations you have with different stakeholders in the agriculture world look like? Who do you bring together?

I think a lot of ideas start at Field Days, when people from a variety of walks of life meet at a farm and talk about the farmer’s operation and what he or she is trying to achieve. If you’ve never been to a Midwestern farmer field day, I encourage you to do so sometime. It’s a lot of fun, especially if the weather cooperates. From my standpoint, some of the most creative solutions happen when you get these diverse people talking together about a place and [say] “Here’s what I’m trying to achieve here, and here’s how I’m going about it.” And people start offering ideas like, “Oh, did you try this? And what about this?” And it gets to be a really fun brainstorming session.

What are the challenges facing the current agricultural system?

The key issue in the Corn Belt is this two-crop system that leaves the ground bare throughout much of the year. Corn farmers plant sometime in April — depending on weather, it could be early May. But the plant is starting to senesce in late August into September and then is harvested, ideally, in October. And the rest of the year, the ground doesn’t have any kind of living plant roots in it. With soybeans, farmers are planting in May or, in a late year, in June, and then it’s harvested in September and again, for the remainder of the year, the ground doesn’t have living roots in it.

Cover crops [are] one solution people are looking at. Prairie strips — that my teams here have helped develop — that’s another solution that doesn’t cover all of the farm field like cover crop would, but it can be integrated into the fields, and in really key ways that help reduce some of those challenges — soil erosion and loss, filtering the water to keep the farm chemicals in the field and out of our waterways — while also providing some cover in that field, living roots to help build soil.

We’re seeding [prairie strips] from scratch in these agricultural fields… using a mix of grasses and forbs, or wildflowers, from this region. We want to site the prairie strip in a place that’s going to reduce that problem of soil loss. We also consider the equipment that the farmer is moving through the field, because we want to try to reduce the impact on the farming operation while addressing the resource constraint. And then we consider if there’s any other environmental vulnerabilities associated with that land. Is there an area next to the stream? If that’s the case, we would want to try to buffer that and protect it. Is there an area that is really low-lying and the farmer is probably not getting great yield [there] anyway, and it also has the potential to [leak nutrients into groundwater or generate] higher greenhouse gas emissions? That’s another area that we would try to target with a prairie strip. 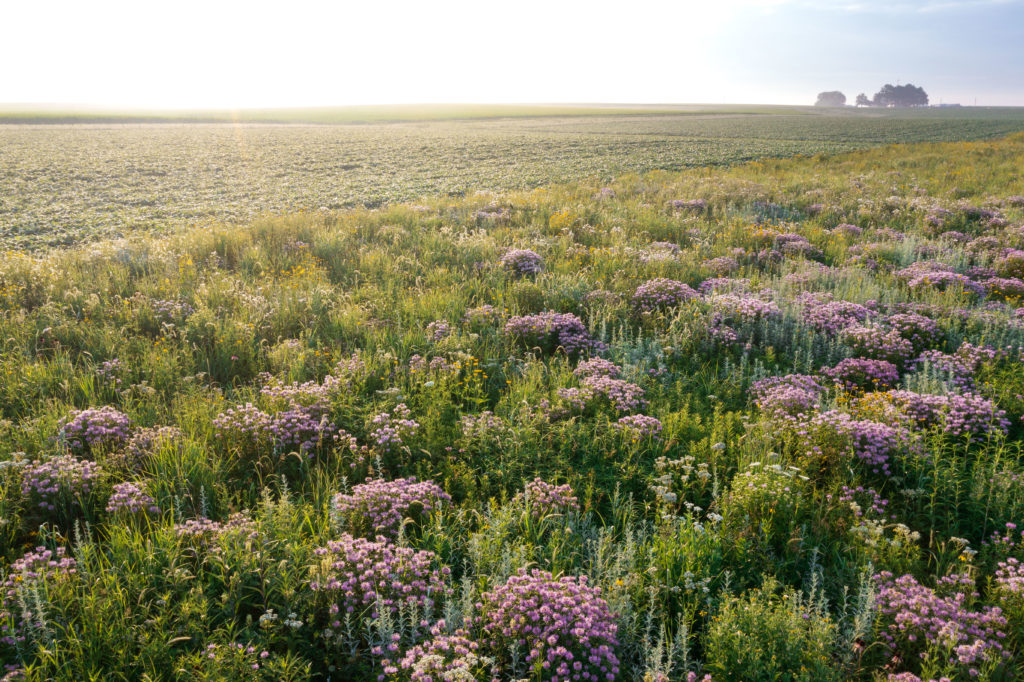 We work with farmers closely to come up with a seed mix that [meets] their goals. That seed mix [has ranged from 15 to 75 species.] We try to have plenty of grasses that do a really good job of keeping the ground covered and [have] vibrant root systems below the ground that [keeps] the soil in place. We also include a wide mix of wildflower species, and [those] are really crucial in terms of providing the biodiversity benefit. The grasses do fine in terms of some of the soil and water conservation benefits, but if we also want the prairie strip to provide a wildlife benefit, then those wildflowers become incredibly important.

What’s next for you and your research, both in the short and long term?

One [thing] is trying to determine how we can get more economic value for farmers from covering the landscape [in Iowa and the] Midwest.

“I’ve been told more than once to stay in my lane, and I haven’t been able to do that.”

When we talk about people’s connection to the land, and especially developing opportunities for young producers, livestock production is the easiest way. And the easiest way to get value out of grassy material in an agricultural environment is to feed it to an animal. So [I’m] looking for ways that we can expand the use of grassy material in livestock systems and develop new ways to help move livestock around the landscape, so it makes it easier on both the graziers as well as the livestock themselves. They don’t have to get in and out of trucks when they need to move around to different patches of grassland for rotational grazing, for example.

The third [thing I’m] heavily researching right now is the opportunity around carbon markets, and how those are unfolding in Midwest agriculture right now. And then, as a part of that, what part of the landscape would it make the most sense to focus on for putting in perennial vegetation? Where are the areas where we can maximize carbon sequestration and have farmers compensated for that through carbon markets?

What does being a MacArthur fellow mean to you?

It’s so huge. Obviously, it’s a major lifetime accomplishment — it’s hugely validating. I tend to be a person that has not followed the traditional mold of science, as somebody that bridges disciplines rather than going deep. And as someone that spends a lot of time working outside of the university, working to build partnerships and working with farmers, rather than the traditional [type of] academic appointment. So it’s hugely validating of the approach that I’ve taken. I’ve been told more than once to stay in my lane, and I haven’t been able to do that. I couldn’t do it if I tried, because it’s just not my nature.

Correction: Due to a transcription error, “grazier” and “agronomic” were previously mistaken for other words.