This smartphone app wants to screen for pancreatic cancer through selfies

Similar to a doctor’s physical exam, the BiliScreen app examines the eyes for a yellowish hue called jaundice that is also a sign of bilirubin buildup. Bilirubin, a yellow substance made when blood cells break down, can accumulate in the skin and the whites of the eyes when the liver or pancreas aren’t working at full capacity.

The researchers think BiliScreen can expedite the detection of pancreatic cancer and similar diseases. And unlike blood tests at a doctor’s office, the typical measure for bilirubin, the app could check for these diseases anywhere.

“We are hoping that if we get these tests out and monitor bilirubin levels, we might be able to diagnose pancreatic cancer,” said computer engineer Alex Mariakakis of the University of Washington, who led the research behind BiliScreen. Pancreatic cancer, an aggressive affliction with an 8 percent chance of survival over a five-year period, is known to produce high levels of bilirubin. This cancer is often caught in late stages, when few treatment options remain.

Using a smartphone camera and experimental smartphone accessories to take pictures of the eye, the researchers tested BiliScreen with 70 people, both healthy or with jaundice. This preliminary trial also featured two accessories. 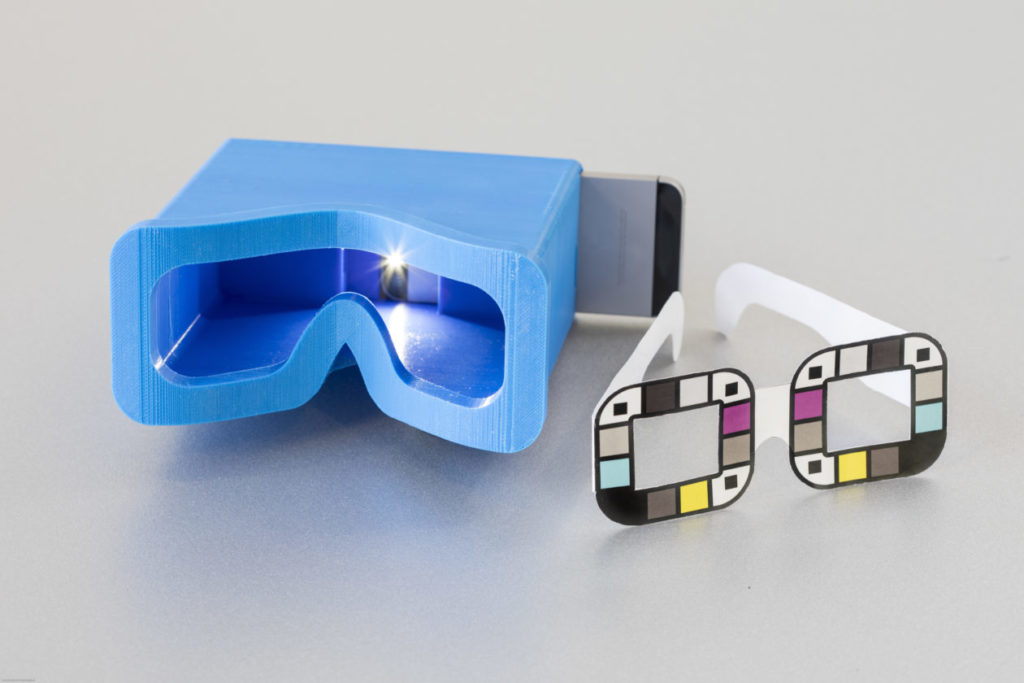 The UW team tested two different accessories for BiliScreen: a 3-D printed box to control lighting conditions and glasses that help the app calibrate colors. The goal is to remove the need for additional accessories, potentially by mining data from facial pictures. Photo by Dennis Wise/University of Washington

One was a pair of glasses with colored squares around the rim to calibrate the hues captured by the smartphone. The other was a box — similar to Google Cardboard — that shielded the eyes from outside light and used the smartphone’s flash for illumination. The app then used computer vision and machine-learning algorithms to assess normal, borderline, or elevated bilirubin levels.

The team compared BiliScreen readings with blood samples taken from the subjects within 24 hours of using the app. The BiliScreen box accessory performed best, giving accurate readings 90 percent of the time and false positive in three percent of attempts.

Dr. Temitope Foster, a gastroenterologist at DeKalb Gastroenterology Associates in Atlanta, said the app could be useful with liver conditions like cirrhosis or hepatitis C.

“Often patients don’t come to me until their jaundice [in the eyes] is at a fluorescent level,” said Foster, who wasn’t involved with the BiliScreen study. “This would be a good way to catch people before they reach a critical level. ”

This is precisely Mariakakis’ vision, but he anticipates the app will need more testing. For instance, the BiliScreen app may produce different results depending on the smartphone and camera settings. BiliScreen will likely not be available to the public for a few years.

Mariakakis does not think smartphones will replace doctors; he hopes the device will assist in patient care and be used in remote communities with limited health care access.

Marlon Mitchell, a family doctor and geriatrics fellow at Georgetown University who wasn’t involved in the study, may use the app during home visits for patients rather than draw blood for medical screening.

“To do a good home visit, diagnostic equipment must go to the home,” Mitchell said. “I’m always intrigued by new possibilities in point-of-care testing.”

Left: BiliScreen is a new smartphone app that is designed to screen for pancreatic cancer by having users snap a selfie. It’s shown here with a 3-D printed box that helps control lighting conditions to detect signs of jaundice in a person’s eye. Photo by Dennis Wise/University of Washington