To take a ride on this car, your body would need to be 1,000 times smaller than a human hair. Before you zoom off, make sure to thank the three winners of the 2016 Nobel Chemistry Prize — Jean-Pierre Sauvage, Sir Fraser Stoddart and Bernard Feringa — whose research created a workshop of the world’s tiniest machines.

These miniscule chemical devices mimic many of the molecule-sized machines that power our cells. And in the future, scientists hope to harness this nanotechnology for drug delivery, microscopic power plants and “smart” clothes that adapt to your surroundings.

“Maybe this morning you ground your coffee, maybe you used a motorized vehicle to get here,” said Sara Snogerup Linse, a physical chemist and chairman of the Nobel chemistry committee. “It’s been the dream of scientists for over half a century to take this development all the way down to the molecular scale. That’s nanometer, one million times smaller than a millimeter.”

Animation of the world’s smallest electric car. Its motion is powered by electrically driven rotors made of nanoscale molecules. Video from Kudernac T. et al., Nature, 2011

This mission required clever chemistry to recreate the basics of machines — the collection of moving parts that convert energy into motion. The researchers needed chemical molecules to replicate the pulleys, levers, rotors and gears that populate our macroscale world.

One of the earliest breakthroughs arrived in 1983 through the work of Jean-Pierre Sauvage, who now works at the University of Strasbourg, France. His group took three chemicals — two crescent-shaped, the other a ring — and found a way to link them with a copper ion. The result was two chemical loops stitched together in a chain and called catene. Like hula-hoops, the loops can move and dangle, but they’re physically connected.

Sir Fraser Stoddart of Northwestern University added to the molecular machine artillery in 1991, when his group built the chemical version of a zip line. The team used a chemical rod — or axle — embedded with lots of electrons and chemical ring that lacked electrons. Due to the difference in electrons, the two structures were naturally attracted to each other and stayed in the same proximity. However, the ring could move freely between stations placed on the axle, creating a zip line or shuttle. His team also discovered a way to power this motion with electricity. Ten years later, Stoddart’s group used similar principles to build an elevator and a contractible “muscle” made out of molecules. 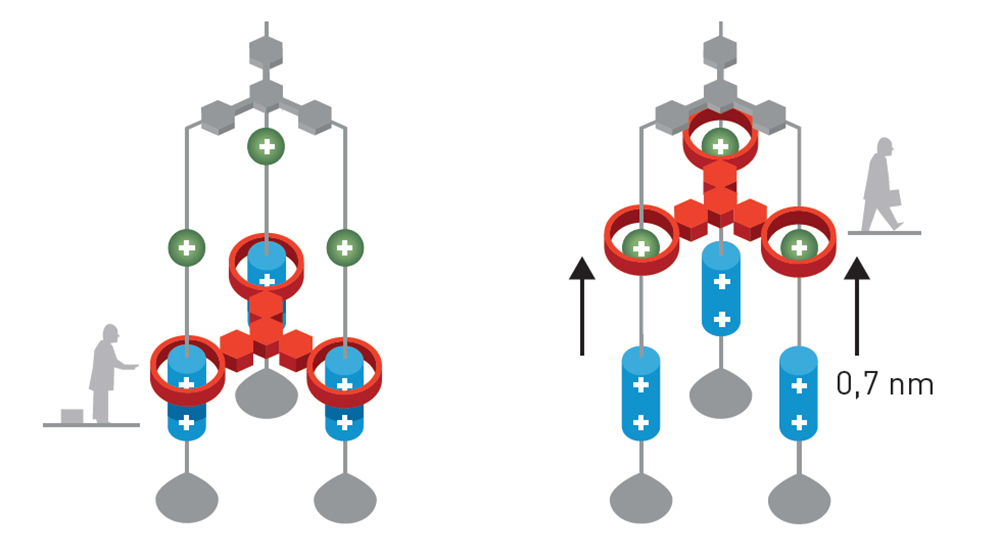 In 1999, Ben Faringa’s team took molecular machines to the next level by chemically engineering nanosized rotors. A rotor, as its name suggests, is a key facet for rotational motion, which powers car wheels or bicycle gears. Faringa said the idea for the molecular rotor came from a simple light switch.

“We wanted to use light to switch between two states in a molecule,” said Faringa, who works at University of Groningen, the Netherlands. “Then suddenly, we discovered besides switching, we could also make a movement that continued in one direction.”

To make a nanorotor, Feringa’s group attached two crescent-shaped molecules via a chemical bond that is sensitive to UV light. Flip a light switch, and the light causes the bond to scrunch, turning the chemical rotor by 180 degrees. The team could then use heat to turn the rotor again or reset the setup to its original position. 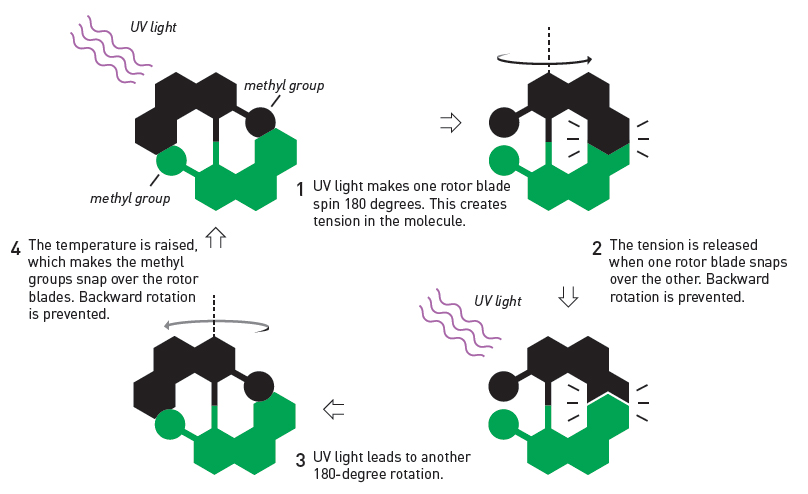 When Ben Feringa created the first molecular motor, it was was mechanically constructed to spin in a particular direction. His research group has optimized the motor so that it now spins at 12 million revs per second. Illustration by Johan Jarnestad/The Royal Swedish Academy of Sciences

The team now has structures that can spin extremely fast, up to 12,000,000 times per second. These newer rotors can also switch from rotating in one direction to the other and can be powered by electricity. In 2011, Faringa’s team attached four of these rotors to a chemical chassis, creating the world’s smallest car.

You’re probably wondering, “So, some chemists spend their time cooking up little crafts that no one can see with the naked eye…why should I care?” 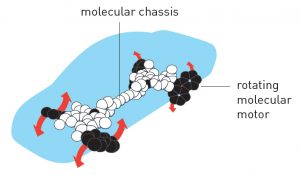 Fair question. We know certain aspects of our bodies — our muscles for example — use molecular machines to create our movements. Those devices contain a wide array of intricate structures, and by comparison, are way more complex than man-made chemical machines. But human tinkers must start somewhere, and though it is too early to tell how these discoveries might influence everyday life, Faringa isn’t too worried about the ultimate outcome.

“I feel a little bit like the Wright Brothers, who were flying 100 years ago for the first time,” Faringa said during a phone call during the Nobel presentation announcement. “[Back] then people were saying why do we need a flying machine, and now we have a Boeing 747.”

He envisions a future where these chemical machines are embedded within smart fabrics and are programmed to react to the environment. One day, a doctor might treat your tumor by injecting you with drug-delivering nanorobots based off these machines.

“Once you can control motion, you can think about all types of dynamic functions, like movement, like transporters, like tiny machinery,” Faringa said. “And it started all with switches, a simple idea.”