Timeline: The Oil Spill at 100 Days

As the Deepwater Horizon oil leak surpasses the 100-day mark, here is a timeline of some key events from the past few months with links to NewsHour coverage (click on images for a larger view): 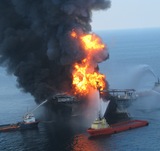 April 20 — RIG EXPLODES | The Deepwater Horizon oil rig atop the Macondo well in the Gulf of Mexico explodes, killing 11 workers. Two days later, the rig sinks, setting off what will become the largest oil spill in U.S. history. BP tries but fails over the next several days to activate the blowout preventer that is supposed to shut off flow from the well after an accident. A congressional investigation later finds there were critical failures in the blowout preventer before the explosion.

May 2 — RELIEF WELL | BP begins drilling a relief well next to the broken well. The relief well is the likeliest permanent solution to halt the leak but will take several months to complete.

May 7 — CONTAINMENT DOME | BP makes its first attempt at a “containment dome” to funnel the leaking oil up to a processing ship. The dome fails after ice-like crystals called methane hydrates form on its surface and clog up the works. 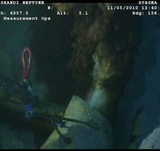 May 12 — FIRST VIDEO OF LEAK RELEASED | BP releases 32 seconds of grainy video — the first video of the underwater oil leak.

May 19 — PUBLIC SEES DAMAGE ON SHORE | The first heavy oil from the spill begins to was ashore in fragile Louisiana marshlands. AP photographer Gerald Herbert spoke with the NewsHour about what he saw there. View a slideshow of his photos here. 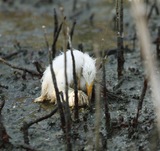 May 21 — LIVE VIDEO FEED STARTED | Complying with a congressional request, BP switches on a live video feed of the oil leak. The continuous video becomes an “internet sensation” and adds to public anger over the spill. The NewsHour is among the first sites to show the video feed, and more than a million people watch it on the first day it’s available.

May 27 — OIL DRILLING STOPPED | President Obama announces a six-month moratorium on offshore oil drilling to give time to address drilling safety issues. The move spurs controversy, and a group of offshore oil industry companies announce they will sue to block the ban.

May 29 — TOP KILL FAILS | BP’s third attempt to stop the leak fails. The top kill aimed to staunch the flow of oil by pumping in heavy mud at the top of the well, but the engineers were unable to overcome the pressure of the oil flow. 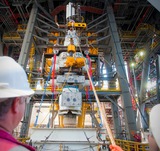 June 4 — CONTAINMENT CAP LOWERED | After four days of stop-and-start attempts, BP successfully lowers a containment cap over the top of the leaking oil well. The cap does not stop the oil flow, but does begin funneling a portion of it to a processing ship on the ocean surface.

June 15 — FLOW ESTIMATE RAISED | The government’s Flow Rate Technical Team — a group of federal scientists and scientists from academia — raise their estimate of the oil flow rate to between 35,000 and 60,000 barrels per day (1.47 million and 2.52 million gallons). That estimate, which stands today, comes after nearly two months of constantly increasing government estimates — which began at 1,000 barrels per day immediately after the spill began — and skepticism from outside scientists.

The NewsHour aimed to reflect of the wide range of opinion regarding the oil flow estimates in our Gulf oil leak meter widget.

June 16 — COMPENSATION AGREEMENT | The White House and BP come to an agreement that the company will set up an independently administered $20 billion fund to cover victims’ compensation claims. 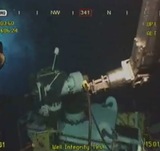 July 15 — OIL FLOW STOPPED | BP closes the final valves on its “capping stack,” finally shutting down the flow of oil. At first it’s not certain that the well will stay intact under increased pressure, so federal officials take the decision to keep the well closed day-by-day as they carefully monitor the surrounding area.

July 22 — TROPICAL STORM THREATENS | Tropical Storm Bonnie threatens to pass by the Gulf region, disrupting work on the relief wells and monitoring in the area. But officials say that the well will remain capped even if monitoring ships have to leave the area, indicating confidence that the well is holding up — and suggesting that the cap will remain on until a relief well is completed.