It’s long been believed that the blackpoll warbler, a speckled grey and white bird with a black cap and an unusually high-pitched song, completed an unimaginably long journey across the Atlantic Ocean. This week, a team of researchers from Canada and the northeastern United States confirmed it. The warblers fly south over water as far as 1,700 miles — with no layover.

“Many consider it one of the most amazing migratory feats on the planet,” said Bill DeLuca, lead author of the study and an ecologist at the University of Massachusetts.

While abundant in the United States, the population of blackpoll warblers is declining rapidly, at a rate of 6 percent a year. Rebecca Holberton from the University of Maine, who has been studying these birds for 20 years — and wasn’t involved in this study — said it wasn’t uncommon in the past to catch 300 blackpoll warblers in the fall. Now you’re lucky if you get 30. Understanding what’s at the root of this decline requires better understanding their life cycle and migratory patterns.

So in summer 2013, scientists strapped geolocator backpacks to the backs of 38 birds in Nova Scotia and Vermont to do just that. The geolocators weigh half a gram and consist of a battery, a light sensor and data storage. Each device recorded the daily sunrise and sunset. Scientists use those times to track the birds’ flight path. 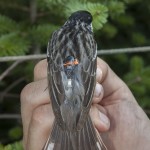 “It’s the way mariners have navigated around the world for centuries,” DeLuca said.

But accessing that data required retrieving the geolocator from a bird that’s completed the migration south and then returned to its breeding ground in the north.

“It seems like this migration is really on the brink of impossibility,” DeLuca said. “And then to say we’re now going to strap this half a gram thing on the bird’s back and hope to get it the following year.”

Of the 38 fitted, five were retrieved. Chris Rimmer, executive director of the Vermont Center for Ecostudies, recalled finding the first bird after it’s return flight.

“Exhilaration. Relief. Amazement. Excitement. All those adjectives,” Rimmer said. “It was a watershed moment for sure.” 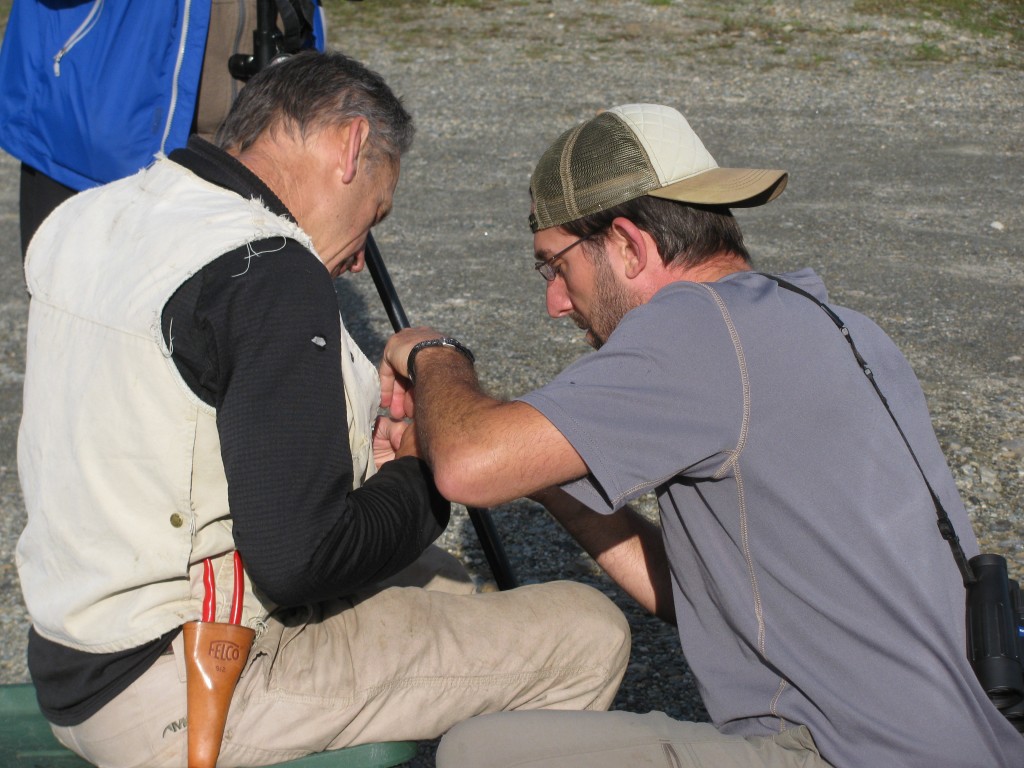 William DeLuca and Chris Rimmer attach a geolocator to a blackpoll warbler on Mt. Mansfield in Vermont. Photo by Vermont Center for Ecostudies

Four of the birds made landfall in Hispaniola or Puerto Rico. Another flew from Cape Hatteras, N.C., to Turks and Caicos. All five continued on to Venezuela and Colombia. Their longest flight ranged from 1,410 to 1,721 miles.

The size of these birds and the fact that they’re a forest-dwelling species sets them apart from other long-distance flyers. Most forest dwellers take the path of least resistance, hopping along the coast and from island to island. And of those that cross over water, most are seabirds, much larger and built to feed on fish.

Scientists believe the warblers ride along the tailwinds. Their fat buildup also helps them survive. Before takeoff, the birds nearly double their body weight from 11.5 grams to as much as 30 grams and shrink unneeded organs, so their bodies are little more than wings for flight, fat for fuel and brain for navigation.

“These birds just become little roly poly balls of feather with fat,” Rimmer said. “It’s extraordinary, the sheaths of fat on their skin. You wonder if they could even take off. But they couldn’t be powered on that long flight without this source of fuel.”

They also shut down parts of their brain that they’re not using and build up their storage of red blood cells, which allows them to hold more oxygen in their blood.

The next step for scientists is to better understand the factors that threaten this population. It’s likely a combination of factors, Holberton said. Deforestation is a threat both north and south in the Amazon River basin, along with an increase in the intensity of offshore hurricanes.

“To know and understand how to effectively conserve a migratory bird, you have to really understand what’s happening at all stages of its migratory cycles — where it breeds and where it winters,” Rimmer said. “This is an important piece of that overall puzzle.”