Tired of extremely cold nor’easters? Arctic warming could be to blame

As the Northeast braces for this winter’s latest cold snap and nor’easter, they should keep the North Pole in mind.

A new study, published Tuesday in Nature Communications, describes a strong relationship between Arctic warming and the most extreme winter weather in the eastern United States since 1990. The pattern is especially strong in the Northeast, where a warm Arctic makes severe winter weather two to four times more likely.

“In Boston, where maybe a major snowfall happened every six years — now it’s every two years,” said Judah Cohen, a climatologist at Atmospheric and Environmental Research who co-led the project. “In Detroit, there are events that are happening now that we didn’t observe prior to the Arctic warming.”

Based on this study and others, Arctic climate events — much like El Niño in the tropics — are becoming outsized players in global weather patterns. This phenomena even has a catchy name — the warm-Arctic/cold-continents (WACC) pattern, otherwise pronounced “whack.”

But these new findings defy a belief long held by climate scientists — one teased by President Donald Trump in late December — that Arctic warming could mean less severe winters in North America.

Here’s why both trends — occasional bad winters and warmer winters in the long-term — can happen without being totally out of whack.

What the scientists did: The Arctic, much like the rest of the globe, is experiencing climate change faster than experts anticipated. In December, NOAA reported the lowest amount of Arctic sea ice in the 40-year history of satellite recordings, which signifies a decline not witnessed in at least 1,500 years. Up north, this rapid climate change is called “Arctic acceleration.”

This animation tracks Arctic sea ice seasonal melt from the time of the 2017’s winter maximum (April) to the year’s likely minimum extent on September 13. The yellow line in the last frame shows the median sea ice extent for 1981–2010. The 2017 minimum is the eighth lowest in the 38-year satellite record. Infographic by NOAA National Environmental Satellite, Data, and Information Service (NESDIS)

Cohen has tracked Arctic changes and their effects on North American weather for decades, but his current study was based on a new weather tracker — the Accumulated Winter Season Severity Index.

Developed in 2015, the Accumulated Winter Season Severity Index is a catchall that provides a readout for temperatures, snowfall and snow accumulation across the United States.

When judging a bad winter, most people think of cold temperatures and snowfall, but either one of those gives an incomplete sense of a winter’s severity. A winter, for example, could be extremely cold but dry, and still seem terrible to the public. But the most disruptive winters are really snowy and extremely cold — and those conditions are readily captured by the winter severity index.

Cohen’s team used this index to examine extreme weather patterns in 12 U.S. cities from winters spanning 1950 to 2016. He cross-referenced these readings with two climate trackers for the Arctic.

The team chose a geographically diverse set of 12 cities to analyze Arctic variability and severe winter weather, though they picked more cities in the northeastern and mid-western U.S. where severe winter weather is more common. Map by Cohen et al., Nature Communications, (2018)

One tracker measures polar cap height — the atmospheric pressure north of the 65th parallel, stretching all the way into the stratosphere. The other measures temperatures at the polar cap. Both gauge warming in the Arctic, though the first can estimate more of the chaotic variables associated with weather systems.

In both cases, Cohen’s team found a near linear relationship between Arctic warming and the frequency of extreme weather events that happen east of the Rocky Mountains. Western winters showed the opposite pattern of being milder when the Arctic was warmest.

Wait, isn’t this the polar vortex? A polar vortex is a cold, low pressure batch of air that always circulates around both poles. It extends upward from the sea surface into the stratosphere. The polar vortex naturally expands and shrinks every winter and summer, respectively.

And scientists already knew that sometimes — but not every winter — disruption of the polar vortex deposits bone-chilling air on the eastern U.S. The West Coast is mostly spared cold air from the polar vortex because the Pacific jetstream creates a protective ridge of warm air, extending north to Alberta, Canada. That’s why Tuesday’s nor’easter can crush Boston, while Seattle clocks record heat. 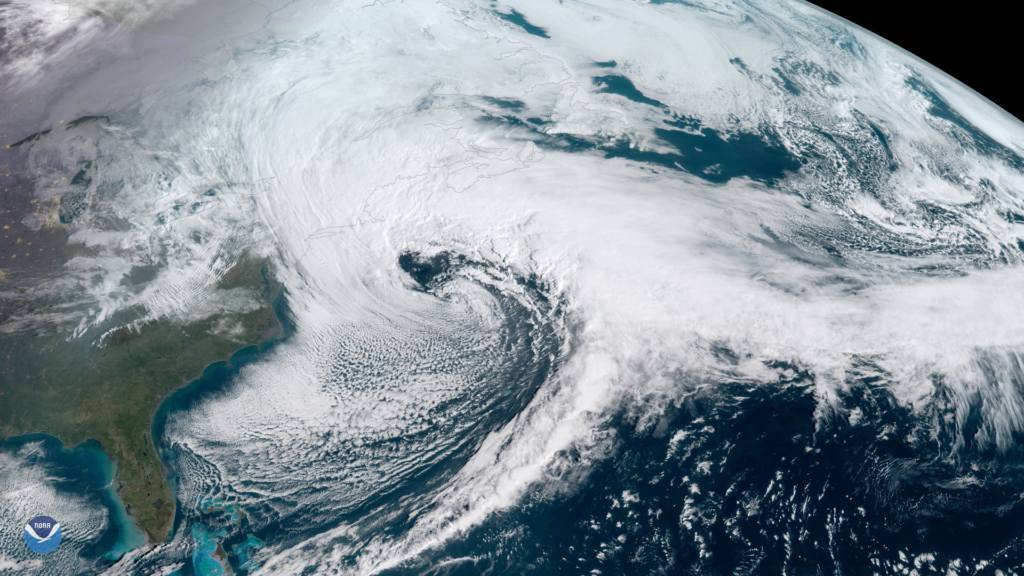 NOAA’s GOES East satellite (GOES-16) captured the Nor’easter storm over the East Coast on March 13, 2018. The U.S. East Coast provides an ideal breeding ground for Nor’easters. During winter, the polar jet stream transports cold Arctic air southward across the plains of Canada and the United States, then eastward toward the Atlantic Ocean where warm air from the Gulf of Mexico and the Atlantic tries to move northward. This difference in temperature between the warm air over the water and cold Arctic air over the land is the fuel that feeds Nor’easters. Photo by NOAA National Environmental Satellite, Data, and Information Service (NESDIS)

The novel thing here is how Cohen’s report quantifies these observations, both in space and time, said Stephen Vavrus, a University of Wisconsin atmospheric scientist who wasn’t involved with Cohen’s study.

“This winter severity index is a complicated metric, but it gives you a better total sense of how the winter feels to people,” Vavrus said. He added it’s the first correlation analysis to tie Arctic conditions to extreme weather in mid-latitudes.

When temperatures get hot during an Arctic winter, severe weather arrives in the Midwest and East Coast five days later, the team found.

Also, this approach found a connection between the timing of extreme warming in the Arctic and the worst weather in the U.S. When temperatures get hot during an Arctic winter, severe weather arrives in the Midwest and East Coast five days later, the team found. One possible reason for this lag is that melting sea ice increases air temperatures in the Arctic.

“We have this warming of the Arctic near the surface, it propagates upward to the upper part of the atmosphere, into the stratosphere,” Vavrus said. “It takes time for that stratospheric change to propagate downward again to reach the surface.”

That cold air from the Arctic stratosphere has to go somewhere, so it gets displaced to the lower latitudes.

Why it matters: Until recent history, scientists had assumed two things: The Arctic has a limited influence on annual weather patterns in mid-latitude locations, like the U.S. Second, and climate models predict that global warming in the Arctic will exacerbate temperature increases everywhere else, not decrease them as shown in Cohen’s real-life observations.

That’s important because climate models are used to determine cause and effect, said James Screen, a climate mathematician at the University of Exeter. 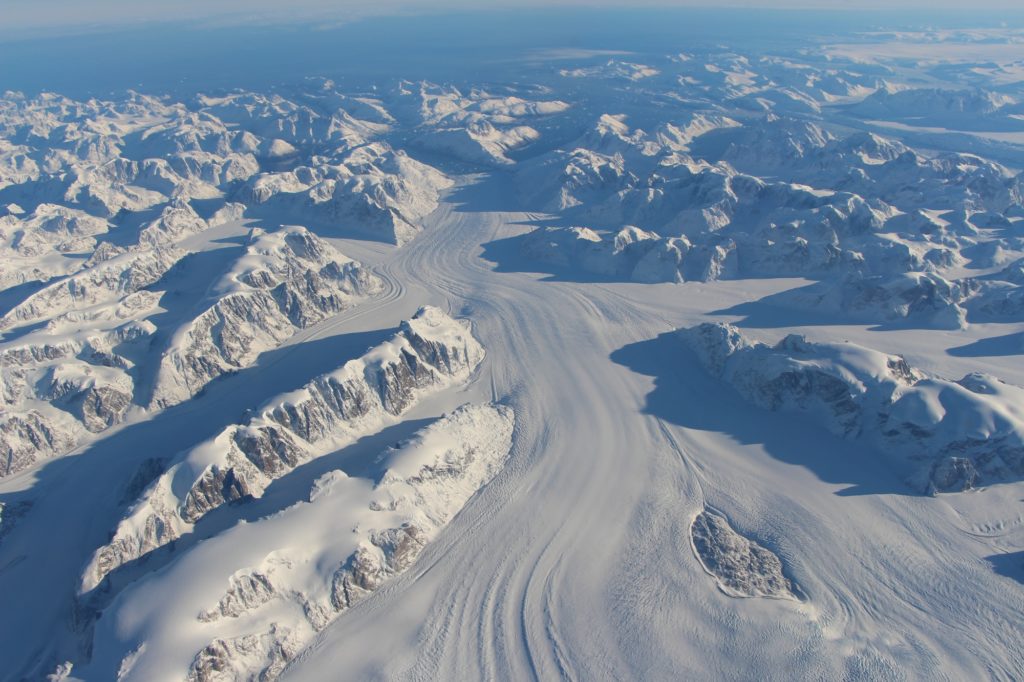 He said either the climate models are missing a major shift in the atmosphere or WACC is a coincidence. It could be that global warming is simultaneously changing air circulations and climate over the Arctic and the U.S., and not that one is leading to the other. Cohen’s paper doesn’t answer this cause-and-effect question.

But Vavrus said some climate models do support WACC, and the discrepancy is due to what timeframe modelers use for their baseline. Natural variations in seasonal and annual climate patterns can alter a final prediction. Vavrus said a coordinated effort by multiple labs is needed to develop standardized baselines and models.

Scientists also need more data on the Arctic, because its recent warm stretch is unprecedented. “[The Arctic] has become kind of a moving target that we’re trying to understand,” Vavrus said.

Cohen and Vavrus said this pattern between the Arctic warming and extreme weather in the U.S. might last for years or decades. It’s unclear. But in the end, global warming will make winter warmer, everywhere in America.

“If the warming just continues unabated, it will reach a magnitude that will overwhelm any other signals,” Cohen said.

Left: A new study describes a strong relationship between Arctic warming and the most extreme winter weather in the eastern United States since 1990. Photo by Kathryn Hansen/NASA Goddard