She took her amputated leg home, and you can too

When Oklahoma native Kristi Loyall had her foot removed, she got it back in a plastic bag.

In 2011, Loyall noticed that her right pinky toe was numb. Despite a series of doctors’ visits, the numbness spread and grew painful. It turned out her foot and lower leg had cancer. As soon as her new oncologist suggested amputation, Loyall asked about keeping the severed limb.

“He thought I was joking, and I was like no, I really want it back,” the 25-year-old Loyall told NewsHour.

Maybe you’ve had a part of your body removed, a kidney stone or a frostbitten toe, and the hospital disposed of it after the procedure. But what if you had wanted to keep it for your mantle or to scare your friends at Halloween?

Sometimes, doctors refuse to give back the body parts, saying that it’s “a biohazard” or “illegal.” Yet, neither of these are completely true. Keeping your own body part isn’t inherently anymore dangerous than keeping a steak, experts say.

“The only issue would be if there was some communicable disease and your tissue had some sort of virus or bacteria,” Boston University bioethicist George Annas said. “Then state and public health officials would intervene, if it puts the public at risk.” 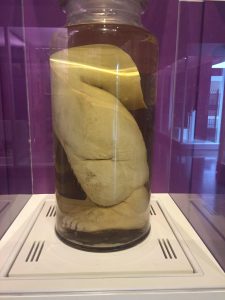 A wet specimen of a leg from the National Museum of Health and Medicine. Photo by Kristin Hugo.

If the body part is pathogen-free, then it just needs to be frozen or properly preserved before being released into the wide world. While Loyall’s oncologist was surprised by her desire to keep the foot, he said that the hospital had a release form for such an occasion. She signed and told everyone involved in handling the leg to not throw it away. The surgeons sent the amputated leg to a pathology lab, where technicians used chemicals to preserve it.

Here’s how body parts are preserved. Wet specimens are human or animal bodies kept in liquid preservatives. Formalin, a mixture of water and formaldehyde, is the most popular preservative for fixing wet specimens, which collectors usually keep in alcohol for storage. But formaldehyde is known to cause cancer in humans. Amateur handling of formalin could be dangerous, but hospitals can give back preserved body parts if they are properly prepared.

After about a month of examining and preserving Loyall’s leg, the pathology lab sent it back to her. She passed it onto Skulls Unlimited, a company in Oklahoma that cleans and sells the skeletons of humans and animals. Cleaned bones, skins and mummified remains are called dry specimens.

As far as legislation goes, there is no U.S. federal law preventing the ownership of body parts, unless they’re Native American. The Native American Graves Protection and Repatriation Act makes it illegal to own or trade in Native American remains. Otherwise, a few states restrict owning or selling human body parts. Louisiana, for instance, enacted a ban in 2016 on private ownership of human remains, with some exceptions. Georgia and Missouri have similar laws.

“The general rule is you have custody of it it, you are considered the owner of your body parts as long as they’re inside of you,” Annas said. “Once it’s taken out, we have some reasonable expectation about what’s going to be done with it.”

It’s uncommon for surgery patients to ask, Annas said, but in general, those body parts are still considered their property.

So, why would a doctor or hospital administrator try to deny a request? They might not want to bother with retrieving the part.

“When they don’t want to do something, they’ll tell people it’s illegal. That doesn’t mean it’s illegal,” Tanya Marsh, a funeral lawyer and author of The Law of Human Remains, said. “A lot of people just cave when they’re told it’s not permitted.”

Other barriers may get in the way of amputation ownership. Some hospitals have internal policies forbidding the return of excised body parts. Alternatively, the body part may not stay intact after removal. Surgeons often destroy a kidney stone or cut up an organ to remove it more easily. After that, the body part might head to a pathology lab, where it could be sliced further into scientific specimens.

Despite the possible hassle, Loyall had personal reasons for keeping her foot. 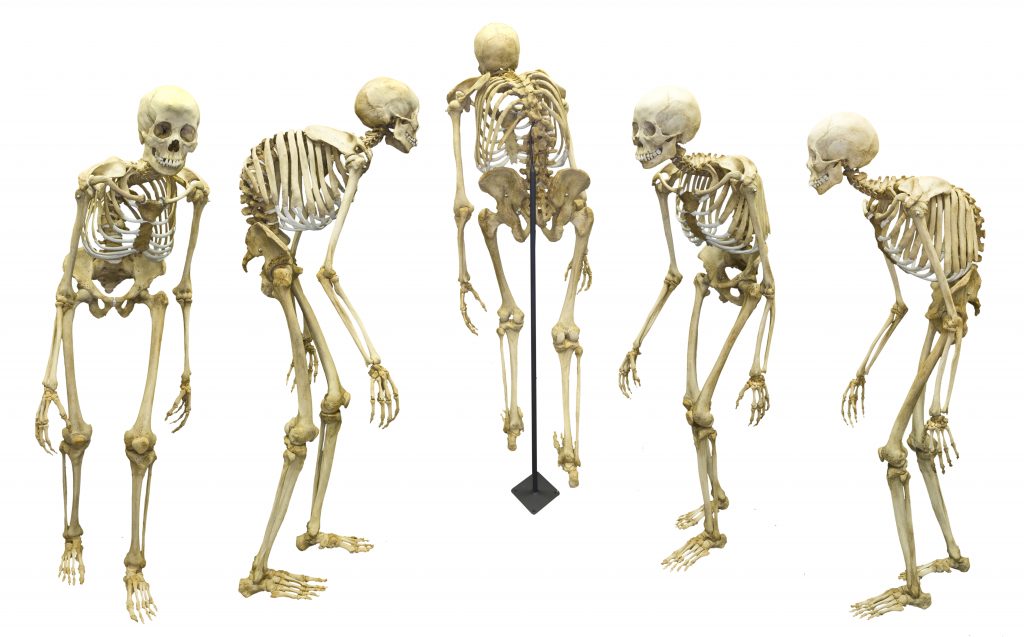 Skeleton of a person with kyphosis, cleaned, articulated and displayed by Skulls Unlimited. Photo courtesy of SkullsUnlimited.com.

“I’m kind of weird like that,” Loyall said. “My parents tried to convince me not to keep it, but I thought I’d regret it for the rest of my life if I didn’t.”

She isn’t alone. Some patients request their excised body parts for religious reasons, Loyall’s oncologist told her, so that they can be buried after death with all their body parts.

There is also a marketplace for former body parts. While it’s illegal in the U.S. to peddle your organs for transplants, there are few restrictions on selling them as oddities or for research studies. People sell just about every human body part on Facebook, from eyelashes and skulls to nipples and hands. In November, a Facebook user sold a 12-week gestated human fetus for $2,000. Another user in the same Facebook group sold small bottles of six human gallstones each for $25 per bottle. The parts usually come from decommissioned medical collections, according to the sellers.

Loyall isn’t planning to part ways with her foot. Skulls Unlimited defleshed the foot, dried it, put it in a tank with flesh-eating dermestid beetles. Next, they whitened the bones and strung them together in order. The process cost her $650 and took four months. Now Loyall has a skeleton foot. She takes it with her on her travels, snapping pictures for her Instagram, OneFootWander.

“You have to just keep reminding everyone that you are getting it back, and they cannot dispose of it,” Loyall said. “Be adamant that you want it back.”