The day that changed tsunami science

It was 3:00 p.m. on Christmas day, 2004 when Stuart Weinstein’s pager buzzed in the operations room at the Pacific Tsunami Warning Center in Hawaii. Seismic waves from an earthquake off the coast of northern Sumatra had activated a seismometer in Australia. Initial readings said magnitude 8.0.

His colleague Barry Hirshorn, a geophysicist, rushed into the control room. His pager had gone off too. Together, they scrambled to locate the epicenter of the quake. In the Indian Ocean, it was early morning, December 26.

“We were flying blind in the sense that we could not determine if a tsunami had been generated,” said Weinstein the center’s assistant director.

Fifteen minutes later, the Pacific Tsunami Warning Center issued its first bulletin. There had been an earthquake, but there was no tsunami threat to the Pacific Basin, where the center is based, it read. When an updated reading showed the magnitude at 8.5, they sent out a second bulletin. There is a possibility of a tsunami near the epicenter, this one said. 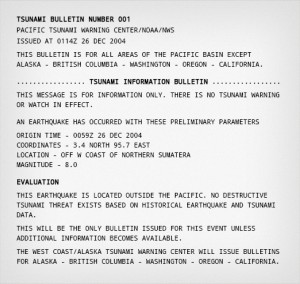 They were missing important information. With no real-time sea level data, they had no way of knowing that the violent movement of tectonic plates — specifically, the India plate sliding underneath the Burma plate – had displaced enormous amounts of water, sending out shock waves and triggering what would become a devastating tsunami.

Some four hours later, the tsunami waves had crashed over Indonesia, Thailand, India, Sri Lanka and the Maldives, destroying buildings, uprooting trees and claiming an estimated 230,000 lives. News of the tsunami reached Weinstein, and soon after, he received an email from Harvard seismologists, upgrading the earthquake’s magnitude again to an 8.9. That was when he realized the rest of the Indian Ocean was in danger.

“Those two pieces of information together told us that a basin-wide destructive tsunami was in progress across the Indian Ocean,” Weinstein said.

Tsunami science was a small field in 2004, with only a hundred or so experts around the world, said Eddie Bernard, who was the director of the Pacific Marine Environmental Laboratory at the time. NOAA had established the tsunami warning center for the Pacific Basin, but there was no warning system for Indonesia, Thailand, the Maldives and Sri Lanka in 2004.

“The speed of the warning wasn’t even the issue,” Bernard said. “There was nobody on the other end of the line.”

Some 2,000 miles from Weinstein at the Pacific Marine Environmental Laboratory in Seattle, Washington, Vasily Titov was scouring through news reports and tide gauge stations for any information about the waves, furiously trying to build a model to predict the tsunami’s path and flooding potential. As the night wore on, news reports slowed as the floods knocked out communication from afflicted areas. He posted the model on the Internet as the waves raced toward Africa, flying across the Indian Ocean at a speed of 500 miles an hour.

“It was surreal on many levels,” Titov, now the director of tsunami research at NOAA, said. “Instruments for tsunami measuring were almost nonexistent…I was frantically putting models together by hand.”

The news had also reached Costas Synolakis, director of the University of Southern California Tsunami Research Center. He was in Greece, preparing for his wedding just four days away. Wedding planning screeched to a halt as he scrambled to coordinate survey teams to the affected areas.

As the death tolls rose, Synolakis was inundated with photos from strangers, asking him if he could please find their loved ones in Thailand and Sri Lanka. He canceled his honeymoon.

He had surveyed every tsunami disaster since 1992, but this was unreal. “It is the worst nightmare coming true…there was no warning. It was worse than what we thought possible,” he said.

Back in Hawaii, seven hours after the earthquake hit, Weinstein was in contact with the U.S. embassies in East Africa, telling them to evacuate. But by the time the conference call took place, the waves were already hitting Madagascar. 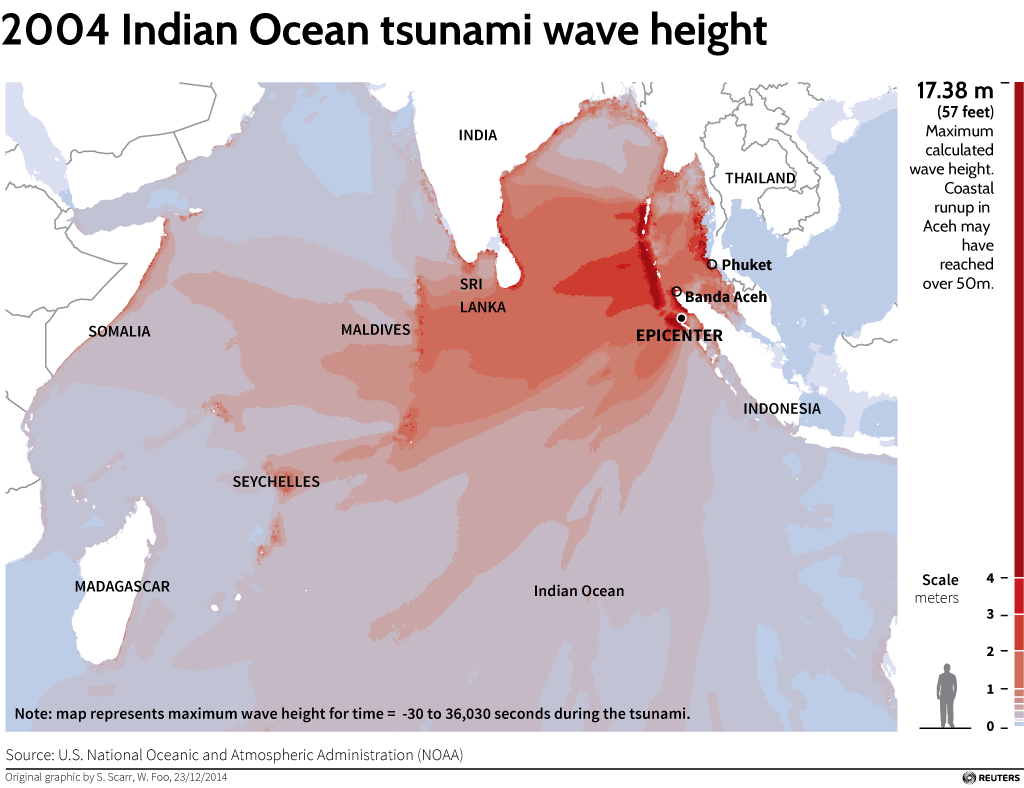 When he got home, Weinstein stared at the ceiling, contemplating what had just happened and their failure to release a warning in time. Three weeks later, the magnitude was upgraded once more — this time to a 9.2.

“Over the hours and days that passed I remember the casualty count going from the hundreds to the thousands, to the tens of thousands, to the hundreds of thousands,” Weinstein said. “I was physically drained. I was mentally exhausted. I was emotionally drained. I was hoping I would never have to live through and visit something like this. For a long time, not a day went by that I didn’t think about what transpired that day.”

It was the deadliest tsunami in recorded history. Thousands of miles away, the disaster shook scientists to their core. But the catastrophic loss of life changed tsunami science forever, said Harry Yeh, professor of civil engineering at Oregon State University.

The disaster drew global political attention and fueled investment in tsunami research. Bernard’s 2004 team at PMEL consisted of just four scientists focusing on tsunami forecasting. At the time, scientists estimated a tsunami’s strength by the magnitude of the earthquake.

“We had no idea how much energy was in a tsunami,” Bernard said. “No one knew how energy from an earthquake got into the water column. It turns out the ‘bigger earthquake, bigger tsunami’ idea doesn’t hold up.”

At the time, having an accurate tsunami warning system was a dream for Bernard, Synolakis and Titov. For the past ten years, PMEL had been developing buoys that would deliver information about rapid changes in sea level in real time. Unlike forecasting major storms, tsunamis require loads of data to model correctly and it is always a race against time, Titov said.

“You have literally seconds in tsunami time. Tsunami models are simpler than atmospheric science models, but you have to run them in seconds,” he said. “You have to nail it right away otherwise it can be harmful.” 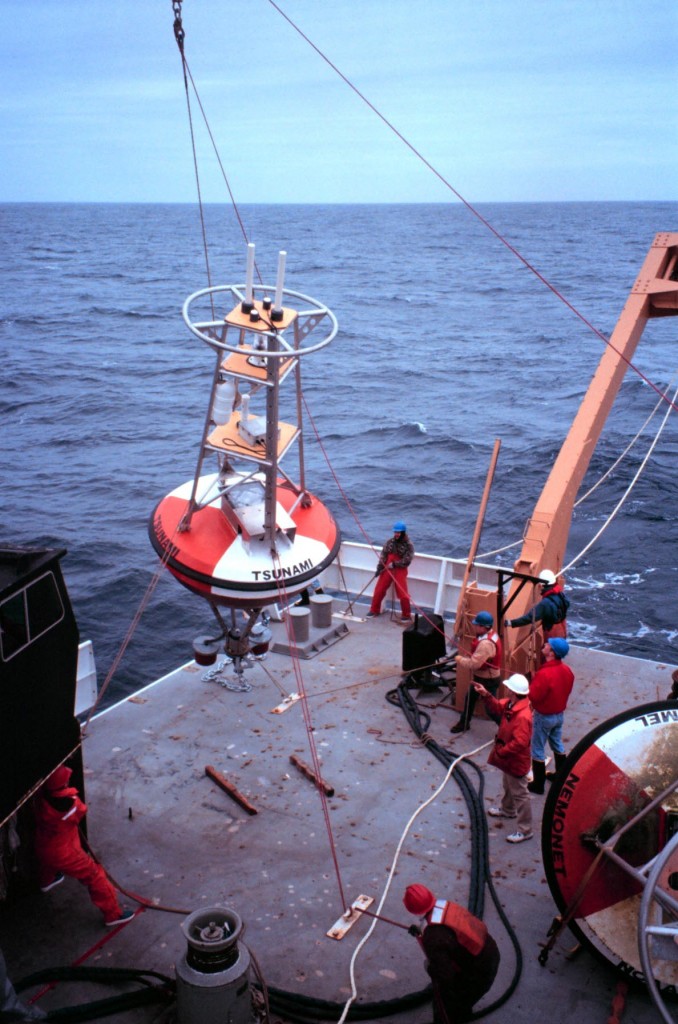 By 2004, NOAA had deployed six DART buoys. (DART stands for Deep-ocean Assessment and Reporting of Tsunamis.) There were seven in the world, total, but only three were operational, according to NOAA.

Today there are 60 in oceans worldwide. Each million-dollar buoy has contributed critical data to tsunami models, building on what Titov started late that Christmas night.

“It’s not very often that you can write some equations on a piece of paper and see it saving lives,” he said.

There have been 40 tsunamis since the Indian Ocean tsunami in 2004. And the difference between the tsunami warning system in 2004 and today is “night and day,” Bernard said. Real-time models run in minutes and have a 70 to 80 percent accuracy rate.

“We are running these models — ten years ago it took hours and now they take seconds. Seconds!” Bernard said.

By the time the Tohoku tsunami struck Japan in 2011, the system was already saving lives. In Banda Aceh in 2004, 90 percent of the people in impacted areas died, Synolakis said. In the heavily impacted areas of Japan in 2011, 10 percent of people died. And while the death toll from the Tohoku tsunami was still tragically high, the warning got more people to safety in time, Bernard said. It’s a sign of how much progress has been made in a decade, he concluded.

“The science has progressed incredibly,” Synolakis agreed. “Not only can we issue warning but we can also estimate the flooding area. It’s entirely possible to do in real time, faster than the tsunami arrives.”

There’s still more progress to be made. More data would further improve models, and as supercomputers advance, the models can run faster, Titov said. The warning system works well now for tsunamis that start far from coastlines. More information would improve models for tsunamis that start closer to shore, Synolakis said. And scientists still don’t know how energy from “stealth earthquakes,” which produce very little shaking, generate about 10 percent of tsunamis, Synolakis said. Another mystery to model: how the tsunami moves once it reaches land, he added.

But the final mile is getting the word out fast enough, and to the right people, Synolakis said. Response times vary by locality. Sometimes this is a matter of education, helping the public and emergency management understand the danger with each warning. He recalls seeing people rush to the beach to watch tsunami waves as they rolled into Santa Monica, California in 2010 — something that could have been deadly.

But it’s also a matter of communication. Cell phones and the Internet mean the warning can spread quickly, but throughout the Pacific and Indian Ocean there are villages without access to these. For example, when a tsunami hit Mentawai in October 2010, a warning flashed across television screens. But very few residents had electricity, much less a television set. That tsunami killed an estimated 400 people, according to the Jakarta Globe.

“We still have a lot of work to do,” Synolakis said. “We can give out timely warnings. But we still have the last mile, and that’s the implementation of the warnings.”

On the NewsHour tonight, special correspondent Kira Kay reports on Indonesia and the recovery of a community that was nearly wiped out by the 2004 tsunami.

Left: Tourists caught by the first of six tsunami rolling towards Hat Rai Lay Beach, near Krabi in southern Thailand on December 26, 2004. The tsunami followed a 9.2-Richter submarine earthquake, which left nearly 230,000 people dead and missing in the region. The New York Times later reported that everyone pictured in this photo is believed to have survived. Photo by AFP/Getty Images