Ultrasound sensors dig deeper into your fingerprints and fat

In spy movies, cunning characters like James Bond or Ethan Hunt are always nabbing fingerprints from wine glasses and creating gelatin replicas to break into hi-tech vaults. Now, scientists have created technology based on ultrasound that could prevent people from cracking electronic scanners with artificial fingertips. These sonicwave sensors would work with wet, dirty or very smooth fingertips — addressing some of the issues seen with fingerprint scanners in the iPhone and other Apple devices with Touch ID.

“The fingerprint sensor industry is always looking for new ways to measure ‘liveness’ — the ability to distinguish between a real finger and a printout,” said David Horsley, a mechanical engineer at the University of California Davis and co-creator of the new ultrasonic fingerprint scanner reported today in Applied Physics Letters.

This new device scans a fingerprint by releasing pulses of ultrasound that bounce off the fingertip’s skin, creating an echo. It takes more time for sound waves to reflect off the valleys of a fingerprint versus its ridges, allowing the device to pinpoint and paint a picture of the crevices. However, some of the ultrasound waves also penetrate through the outer skin layer — the epidermis — reaching the inner layer called the dermis.

“It turns out that you have the same fingerprint on your dermis that you have on your epidermis,” Horsley said, and this deeper scan can detect physical landmarks like sweat pores and blood vessels buried in that inner skin layer.

To measure these subtle shapes in fingerprint echoes, Horsley’s team relied on two electronic wafers that are stacked on top of each other. The first layer is populated by a field of tiny drumheads known as piezoelectric sensors. As skinny as human hairs, these sensors transform the mechanical energy from the sound waves pushing against the wafer into electricity, which is read by a second layer of microcircuits. These ultrasound sensors cost about 30 percent more to manufacture than current fingerprint detectors.

By spotting blood vessels and sweat pores, these ultrasound sensors could verify if a fingerprint came from a real finger versus a fake. In contrast, Apple’s Touch ID relies on physical contact with your finger and the small electrical current that passes between your skin cells and the scanner. Hackers have cracked this system by creating an artificial mold of a fingerprint and sticking it to their skin. 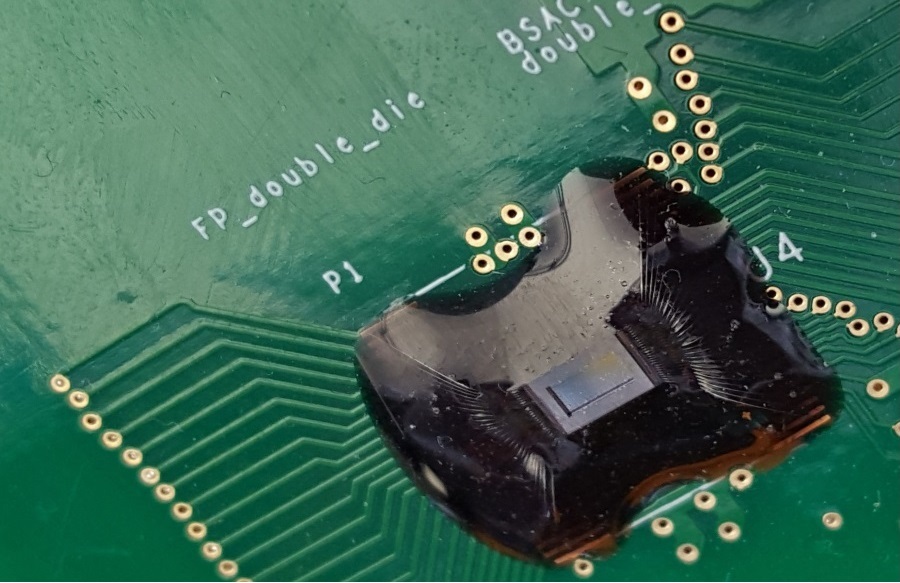 An ultrasonic fingerprint sensor measures a 3-D image of the finger’s surface and the underlying tissue. Photo by Dave Horsley

The wireless tech company Qualcomm unveiled a similar ultrasound fingerprint scanner in March, called Snapdragon Sense ID, but Horsley says if the technology catches on, its uses could extend beyond fingerprints. For instance, his team has designed similar ultrasound sensors that can measure the fat and muscle content underneath your skin. These sensors are small enough to be packed into a stylus or a smartwatch.

“Say you’re interested in learning if all the sit-ups that you’ve been doing have had an effect. You could point these sensors at your stomach to see if the fat layers have shrunk and if the muscle layers have thickened,” Horsley said.

“There is a lot of interest in sensors that can tell what’s going on in your body thanks to the personal health revolution,” Horsley said. “These ultrasound microsensors clearly have that capability. They’re safe because they don’t penetrate very deep, and we’ve only scratched the surface of what they can do.”

Native or invasive species? The distinction blurs as the world warms