Keeping up with the Joneses, Neolithic Scotland edition

KIRKWALL, Scotland — It’s been described as an outdoor cathedral of sorts, and to me that’s exactly how it feels.

As I stand on this windswept bit of Orkney looking down at the Ness of Brodgar dig site, there’s a salty sea loch to my left, a freshwater loch to my right, and standing stones in front of and behind me. I can perfectly imagine why in 3,300 BC people might have flocked to this unique spot – this vast complex of buildings that was used for 1,000 years.

The Orkney Islands are littered with a collection of world-famous archaeological sites. Skara Brae is a superbly preserved Neolithic hut settlement. Maeshowe is a chambered stone tomb, built so the midwinter sun shines along its low entrance hall. The Standing Stones of Stenness, one of the oldest henge sites in the British Isles, is just a stone’s throw away from “the Ness,” where I stand. 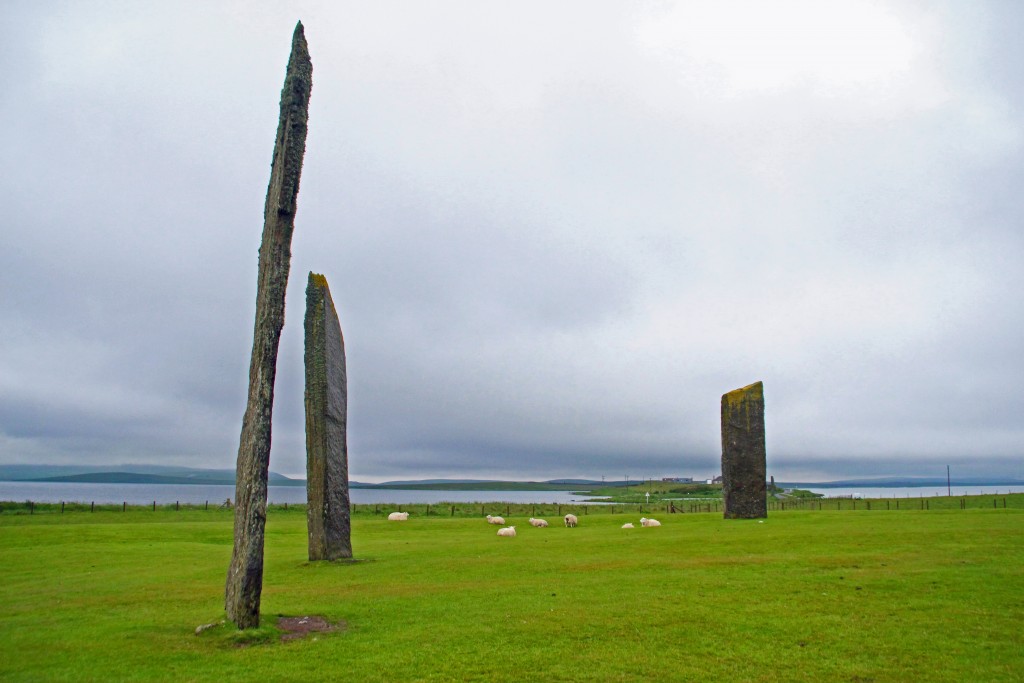 Sheep graze among the Stones of Stenness, one of many Neolithic sites in Orkney. Just beyond the standing stones lies the Ness of Brodgar, a Neolithic complex without parallel in Western Europe. Photo by Lorna Baldwin.

The Neolithic site under excavation here has been called an archaeologist’s dream, filled with impeccable sandstone walls, paved walkways, slate roofs, painted walls and decorated stonework. It is also full of mystery. What did people do here some 5,000 years ago? 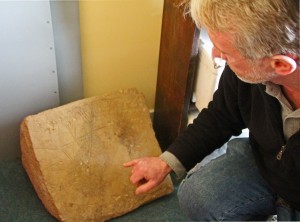 Archaeologist Nick Card shows off a Neolithic carved stone slab unearthed from one of the 20 structures at the Ness of Brodgar, in Orkney, Scotland. Photo by Lorna Baldwin.

Nick Card, the dig director for the Archaeology Institute at the University of the Highlands and Islands, has been on a quest to answer that question since the dig site was discovered more than a decade ago. In 2012, during a lecture tour to the U.S., he sat down with the NewsHour to explain his work. At the time, he said the enclosure of 20-plus structures encircled by a massive wall likely had a religious function — something to do with life and death.

“This was a place where obviously everybody wanted to have representation for their community,” Card said. “And what you see is that they are almost competing with each other, each community. A lot of the buildings look like they’re built on a kind of similar theme, but they’re all different, and they all are kind of extravagant.” 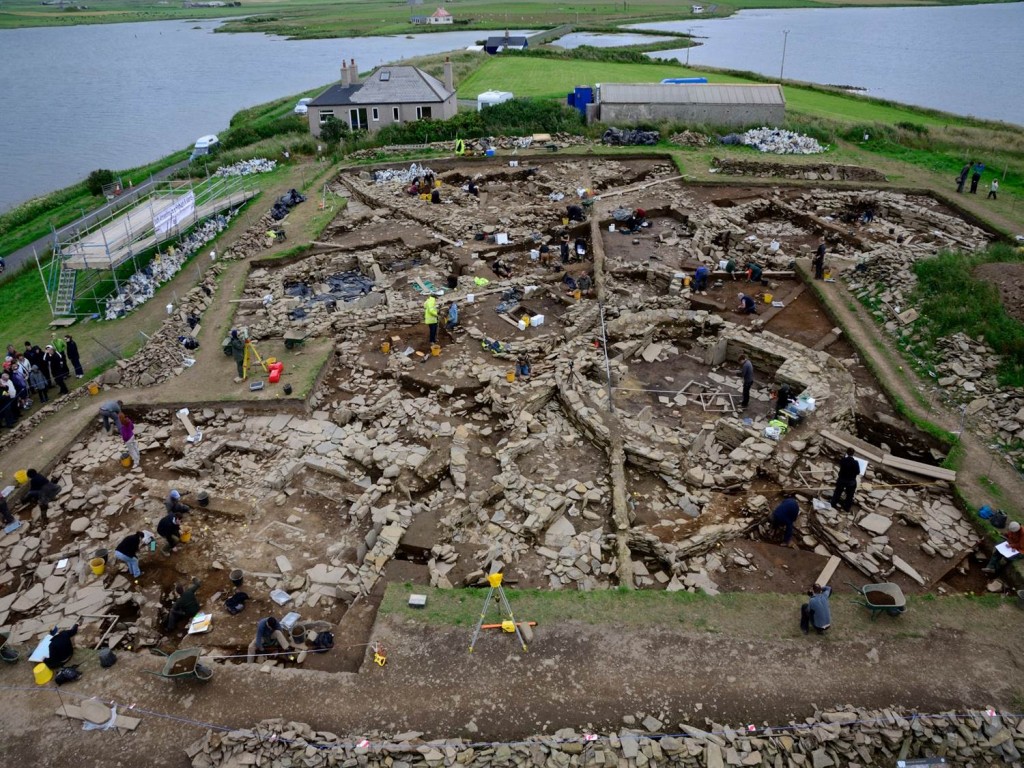 The Ness of Brodgar from the air in 2012. Photo courtesy Nick Card.

Anthropological records from Polynesia and other places support this idea of competition as a driving force — who could move the biggest stone, for example or who could feed the most people.

“I think all too often the Neolithic is seen as this kind of hippiedom of prehistory,” Card said, “but there’s a growing amount of evidence to show that you see trauma, a lot of trauma, and disease in skeletons, and I think there was competition which occasionally spilled into not quite warfare but a bit of nastiness.”

Alison Sheridan, the principal curator of Early Prehistory at the National Museums Scotland and an expert in the Neolithic and Bronze Age in Britain and Ireland, said the Ness of Brodgar contains some of Europe’s best constructed Neolithic stonework.

“Orcadian society was not egalitarian, but instead markedly competitive,” she said. “Imagine prosperous farmers in the rich Orkney landscape, whose forebears had farmed successfully for a good 500 years there. Some groups or individuals wanted to be more powerful than others, and so they indulged in acts of competitive conspicuous consumption, like building tombs that were bigger, better and more elaborate than anything that had gone before.” 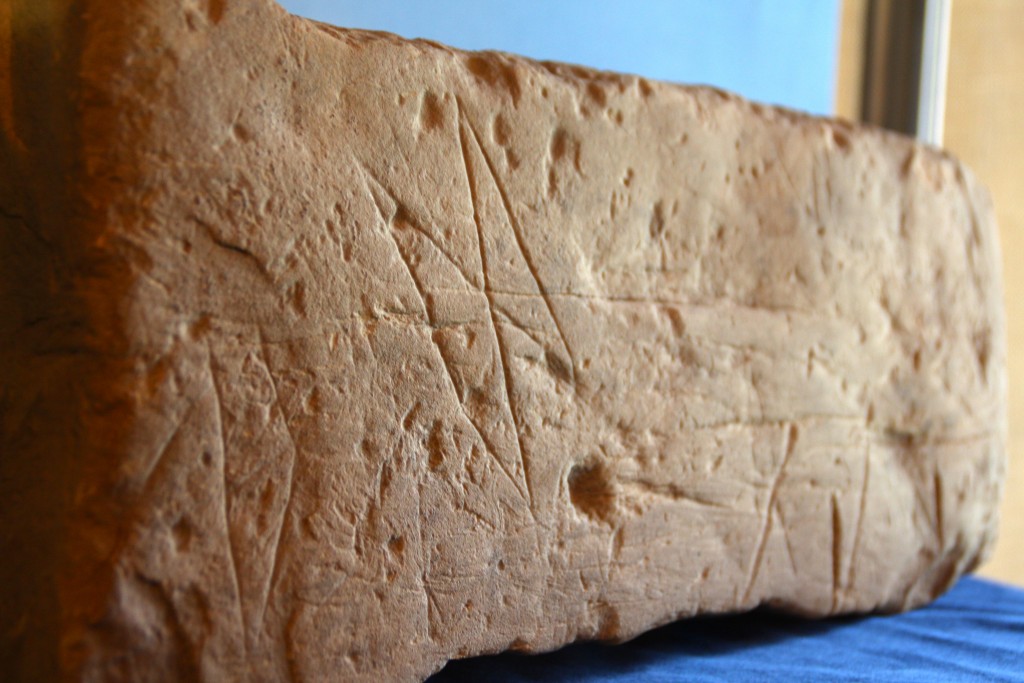 The ‘butterfly’ motif is repeated on many stone slabs found at the Ness of Brodgar. Photo by Lorna Baldwin

As we talk at the edge of the site, Nick Card rolls and lights a cigarette in an effort to disperse the cloud of midges, or biting flies, that encircles us. He tells me about the decorated stonework found in every structure, more than 650 pieces in all. They include a cup and ring pattern known as the “Brodgar Eye,” along with a “butterfly” motif.

“You get the repetition of certain designs,” he said. “It’s not like an alphabet, it’s not like writing, but at the same time it was there to transmit something, and whoever saw this equally understood that this meant something.” 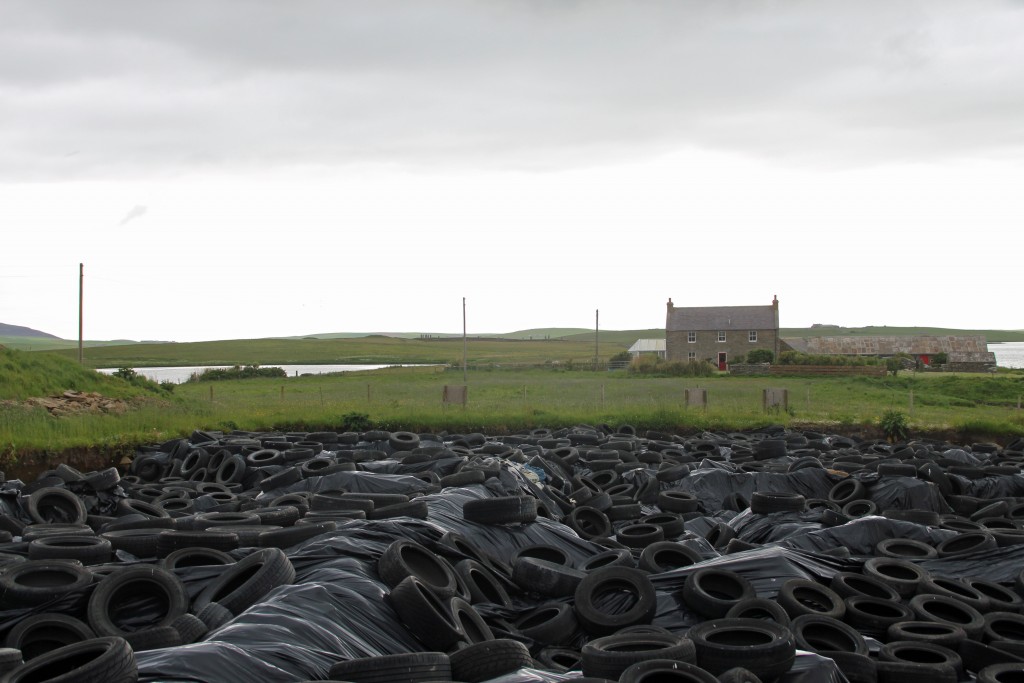 The dig site is covered with 5,000 sandbags, tarps and tires to keep out the cold and wind. Photo by Lorna Baldwin.

By the end of August, the site will be covered with tarps, 5,000 sandbags and stacks and stacks of tires to protect it from the elements. Until this year, the dig lasted six weeks in the summer. This year, through an anonymous donation, it was extended to eight weeks. Why such a short dig season, I ask.

“But it’s not only the funding of the dig, it’s what the dig creates post-excavation, which costs an awful lot of money and even with the use of volunteers and students it still costs in the region of [$3,100] a day to run the site.”

Some funding comes from the local Orkney Islands excavation fund, a bit more from Historic Scotland, but the bulk of money comes from public donations and charities, including the American Friends of the Ness of Brodgar.

Americans play a prominent role in the dig effort. Willamette University in Salem, Oregon sends a group of undergraduates each summer. It was an American student who found a rare example of a carved stone ball — an intricate, asymmetrical, nubbed ball reminiscent of a prehistoric Rubik’s Cube.

“Our midden threw every archaeologist on the islands for a loop,” Maatta said. “It turned out that we had a structure too.”

Earlier geophysics hadn’t turned up any evidence of a structure underneath, so it was a total surprise to the entire team when one appeared. 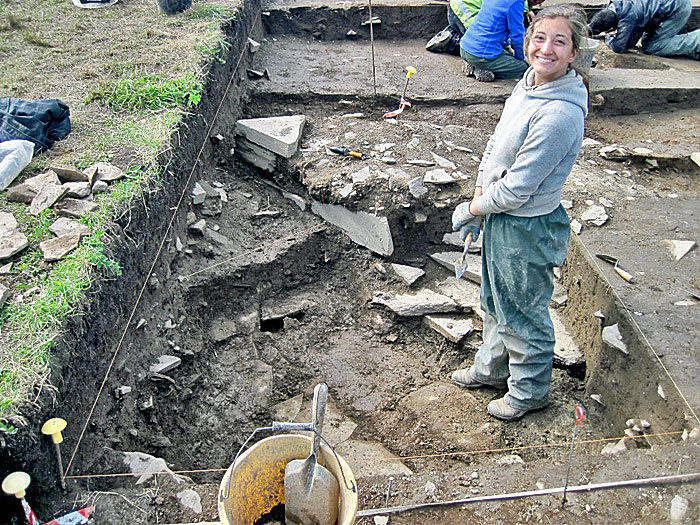 “I was evening out my section, thinking about the wall and what I wanted for dinner that night, when my trowel scraped along a long slab of particularly thin flagstones,” she said. “Enthusiastically, since I had found nothing ‘cool’ yet that day, I followed the slab and removed all of the soil from it. It ran parallel to a similar strip of stones about six inches away from it.” It was a drain — only the second to be found on the site.

Only 10 percent of the complex is under excavation, leaving more mysteries to solve and a life’s work for Card and other archaeologists .

Left: Activity in the trenches at the Ness of Brodgar dig site in July 2015. Excavation this year was extended to eight weeks with funding from an anonymous donor. Photo by Robert Scarth.