Unlocking the Secrets of a Swimmer’s Scourge, the Jellyfish Sting 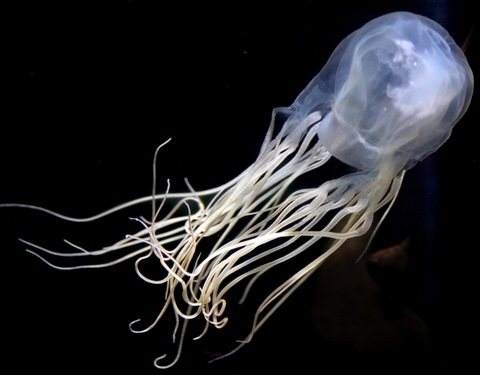 Updated: August 5 | On the morning of July 29, 1997, while swimming off the shore of Waikiki, a throng of box jellyfish stung Angel Yanagihara along her neck, arms and ankles. She swam back to shore wheezing and gasping, and then collapsed, blacking out, on the sand. She regained consciousness in an ambulance, surprised to find herself covered in vinegar and saran wrap.

“I was really horrified at this waste of medical expertise on behalf of jellyfish stings,” she recalls now. “I remember thinking, this probably wasn’t the most sophisticated approach.” So Yanagihara, a biochemist, resolved to find out more about the source of the sting.

After she was somewhat stabilized, the EMT suggested she take a hot shower, which temporarily reduced the pain. But on the drive home, it returned with vengeance: intense, fiery burning on her neck, legs and arms, accompanied by labored breathing, dizziness, nausea. “It was just horrible,” she recalls. Hers was among 1,000 ambulance calls in Honolulu responding to jellyfish stings that month alone.

Box jellyfish are among the most venomous creatures in the world. They are virtually transparent, with a bell that ranges in size from a thimble to a basketball and anywhere from 4 to 60 tentacles, depending on the species. Their tentacles, which can reach as far as 10 feet in the Chirodropids, the largest members of this class, contain as many as 5,000 tiny stinging cells per centimeter, which discharge venom in as little as 700 nanoseconds. That venom contains toxins that can attack cells in human skin, blood, heart and nervous system. And their stings have been known to cause skin lesions, heart failure and occasionally death, not to mention, as Yanagihara can attest, excruciating pain.

In the 16 years since her injury, Yanagihara, now a research professor of tropical medicine at the University of Hawaii, has devoted her career to biochemically studying these stingers and developing a treatment against jellyfish venom. And she thinks she may have found one in zinc — specifically, a compound called zinc gluconate. In a study published in December 2012 in the journal PLOS One, she shows that zinc gluconate helped to save mice given a lethal injection of box jellyfish venom.


Jellyfish, she found, release toxins called porins, which are structurally similar to the blood-destroying, pore-forming molecules released from anthrax and streptococcus, she said. The porins tear holes in blood cells, leaking potassium from the cells as they do so. And it’s the sudden spike in potassium in the bloodstream, known as hyperkalemia, that causes cardiovascular collapse in some victims, she shows in her study.

Yanagihara found that the zinc compound “markedly reduced” potassium leakage from red blood cells and both stabilized heart rates and delayed or prevented death in mice injected with jellyfish venom.

She’s since developed three treatments — one preventative and two designed to be used immediately following a jellyfish attack. She tested them herself by applying the preventative ointment and then laying an entire box jelly across her arm. (“Essentially, nothing happens,” she said.)

And while the treatments must still go through several rounds of human trials before they’re approved for commercial use, she already has a willing participant — and a very high profile one.

Long distance swimmer Diana Nyad, 63, is preparing for her fifth attempt at the 103-mile swim from Cuba to Miami. She sent out a “red alert” email to her team today, alerting them to prepare for departure. “My adrenaline has hit overdrive,” she wrote in the email.

It was life-threatening lightning storms that slammed the swim to a halt in August 2012, but she also endured thick swarms of jellyfish, she told NewsHour correspondent Margaret Warner, in an interview immediately following her swim. She had made it about halfway before being pulled from the water with a sunburned face and lips swollen by jellyfish stings.

Diana Nyad talks to Margaret Warner about the obstacles that she encountered during her fourth attempt at swimming the distance between Cuba and Florida in order to become the first person to do so without a shark cage.

“How could it be that a tiny animal that has a tentacle no bigger than a strand of a hair…could be out there in this vast wide ocean, and I’m wearing a suit and creams and repellent, and the only square inch of my entire body that is open and exposed are my lips, because I have got to breathe — how could that tentacle find those lips?,” she said to Warner.

This time, Nyad’s handlers will slather a sticky substance over her body every 80 minutes or so. In this column posted on the Huffington Post, Nyad also describes the gear she’ll wear to protect herself from stings: “cumbersome ‘armor,'” she calls it.

“They slow me down, take much more effort per hour, and interrupt the normal breathing process,” Nyad writes. “But our team, at least, could not come up with another viable solution. Desperate measures for desperate times.” 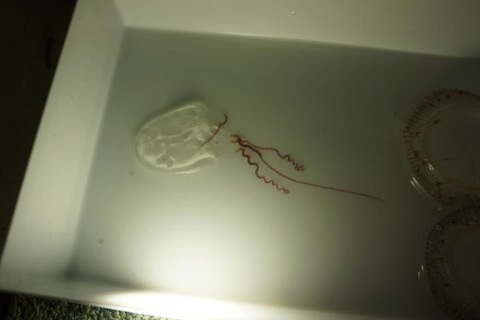 This is a sample of one of the stingers that Nyad encountered during her 2012 swim. Photo by Angel Yanagihara.

Yanagihara was on Nyad’s support boat in 2012, and her expertise and treatment — spreading the gel across the neck and shoulders, along with the “After Sting” substance — greatly lessened the stings, Nyad wrote in the post:

“When I would scream out with the pain of a sting, I’d try to get to the side of the boat in a hurry where Angel and my Head Handler Bonnie Stoll would deftly wipe tentacles from the affected area and apply the After Sting substance,” she recalled. “I had half a fighting chance.”

Many say that jellyfish populations have been thriving due to overfishing, warmer ocean temperatures, and stormwater runoff that carries floods of nutrients — that’s food source for jellies — into ocean waters.

A rare jellyfish called the black sea nettle, or Chrysaora achlyos was spotted in Southern California earlier this month, and swimmers came ashore with stings, and dark membranes sticking to their skins and wetsuits. Wyatt Patry of the Monterey Bay Aquarium says at least once a year, intake screens at the aquarium will get completely clogged with other species of sea nettles. Such events used to occur only once or twice every 30 years, he said.

“The screen literally gets crushed like a soda can,” he said.

And Paul Bologna, a jellyfish expert, has seen increasingly more sea nettles along the New Jersey’s coastline. He attributes the blooms to the growing numbers of docks and bullheads, which have replaced salt marshes and natural shore lines, along with efforts to replace tarlike creosote, which once covered these structures, with less toxic building materials.

“Now that we went with nontoxic, it opens up a lot of spaces,” he said. “It’s a perfect storm for jellyfish.”

But a limited data set means it’s unclear how much the jellyfish populations are growing.

“We don’t have any historical data to give any definitive examples of whether the sea nettle population has exploded or only increased a little bit,” Patry said, adding that this also applies to broader jellyfish populations.

A recent paper in the Journal of Plankton Research highlights the debate, and offers some suggestions to fill the research gaps, including “international standardization of methods, a discipline-specific journal for jellyfish research and an international science program on the global ecology and oceanography of jellyfish.”

The question sets up the kind of healthy dynamic that one wants in science, and values good data over flashy headlines, Yanagihara said. She does regular offshore sampling in scuba gear during the late-night hours of jellyfish swells by attaching herself with a carabineer, tether line and lead-weighted down line to a boat.

“We need to identify this as a critical unmet need with regards to scientific research, and we need to have the funds available for folks to do this research,” she said. “To have the pendulum swing, what one needs is definitely the data.”