This summer’s blockbuster “Jurassic World” ruffled the feathers of many a paleontologist when the movie’s depiction of several dinosaurs, namely the ferocious Velociraptor, lacked, well, feathers.

Now, adding more weight to the argument, a new species of dinosaur — a close cousin of the fierce predator made famous in the “Jurassic Park” films — has been unearthed in China, possessing an almost perfectly-preserved set of bird-like wings.

In a study published in the journal Scientific Reports on Thursday, researchers describe the newly-discovered species, named Zhenyuanlong suni, as having “complex wings” with quill-like feathers — something never seen in large feathered dinosaurs previously. The researchers believe that these type of complex, winged dinosaurs may have been more diverse than previously believed. 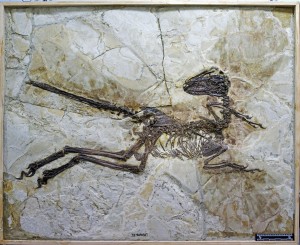 The fossil remains of Zhenyuanlong suni.
Image by Junchang Lu

“This new dinosaur is one of the closest cousins of Velociraptor, but it looks just like a bird,” Dr. Steve Brusatte, co-author of the study, said. “It’s a dinosaur with huge wings made up of quill pen feathers, just like an eagle or a vulture. The movies have it wrong — this is what Velociraptor would have looked like too.”

In an interview with BBC News, Brusatte added, “It will blow some people’s minds to realize that those dinosaurs in the movies would have been even weirder, and I think even scarier — like big fluffy birds from hell.”

Though the research team believes that though Zhenyuanlong possessed a bird-like appearance with complex wings, it most likely was unable to fly. Why it possessed wings remains unclear, though researchers believe that the dinosaur could have evolved from flight-capable species and simply used its wings for display, not unlike a peacock.